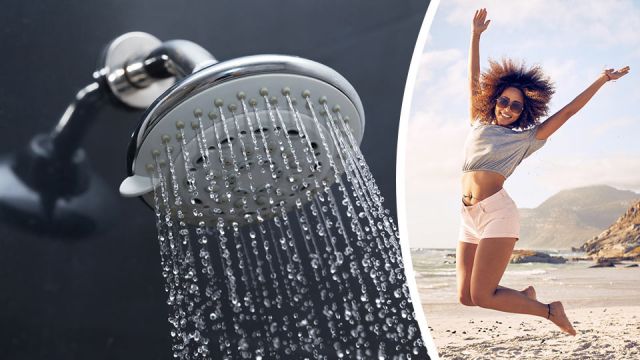 I spent over a year having just cold showers when I lived in a share house in the cold mountains of Venezuela. Now, where I live in Mexico, cold showers are sometimes necessary because the gas runs out or the mild winds are blowing out the gas in the water heater. I confess, it’s rough. Cold water in my long hair, and especially the top of my back, is almost a tiny bit painful. Shaving doesn’t really work. But, it’s also really not as bad as some people imagine, and it is one heck of a way to wake yourself up and start work with a fresh and clear mind. In fact, studies and research have uncovered several ways that cold showers can be beneficial, and some of those will probably surprise you!

While a single shower won’t be burning a pound of fat, a cold shower prompts a range of physiological reactions that can assist with weight loss. In one study, scientists found that bathing or showering in temperatures of 14-32 degrees Celsius (57 – 90 degrees Fahrenheit) increased metabolic rate, lowered heart rate and decreased cortisol levels. Cortisol is a stress hormone — and elevated levels of it can negatively impact memory, lower bone density, increase blood pressure and increase weight gain, cholesterol and the risk of heart disease. It stands to reason then, that using a cold shower to lower your cortisol and stress levels has all of these benefits.

Additionally, cold showers (and cold temperatures generally) activate the “good” fat in your body — the brown fat that keeps our bodies warm. This is different to white fat, which is the type our bodies tend to store. Taking it perhaps too far, a 2009 study found that exposure to extreme temperatures increased brown fat activation 15-fold, meaning that technically someone could lose up to nine pounds if they kept up the daily exposure for a year.

While there’s no doubt a quick cold shower will drop cortisol levels in the short term, a 2016 study was interested in the long-term effects of cold showers. The researchers found that after 90 days of cold showers, participants’ self-reported sick leave from work reduced by 29 percent. Participants reported that their main benefit was an increase in perceived energy levels, with many of them comparing the effect to that of caffeine.

Cold water causes less hair breakage than particularly hot water, and it will flatten “ruffled cuticles and lock in moisture,” according to dermatologist Jessie Cheung. Cold water also temporarily tightens pores and decreases redness and puffiness, while boosting blood circulation. Hot water tends to strip away some of the skin’s natural oils, leaving it dry and itchy, and even exacerbating skin conditions like eczema. Dermatologists recommend a short blast of cold water, and five to ten-minute-long lukewarm showers.

Perhaps like using an ice-pack, sitting in a 24-minute cold bath one to four days after intense exercise has been found to relieve sore muscles. According to research, cold temperatures reduce swelling and tissue breakdown, while shifting lactic acid — one of your body’s waste products.

When you take a cold shower, the cold receptors in the skin send electrical impulses to the brain’s nerve endings, boosting moods and providing a buffer to depression. Further, a lot of people practice quick changes from cold to hot temperatures (i.e., getting out of a warm bath and into a cold shower). The temperature changes cause blood to move to the body’s surfaces and then to its core, thereby helping with brain and organ function.

Have you taken cold showers? Did you notice any benefits? Let us know in the comments below.