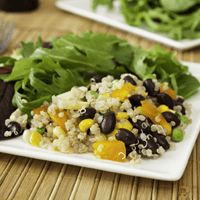 The mineral magnesium is an essential nutrient that sustains every cell of the body. It helps power all cell functions and is critical to over 300 biologically active enzymes. Plants can’t do without it, either; it regulates photosynthesis and chlorophyll production. The more it is studied, the more important the mineral proves to be for general health.

New research stresses the value of magnesium in averting heart disease and stroke and calls outright for clinical trials of the mineral in preventing cardiovascular disease and curbing the rise in metabolic disorders such as diabetes.

Despite magnesium being one of the most abundant minerals in our bodies, deficiency is on the rise. At most, 40 percent of us get enough from the foods we eat. Deficiency manifests in symptoms as diverse as insomnia, muscle spasms, arrhythmias, insulin resistance, and anxiety. Magnesium levels in foods are declining, but your best bet for getting enough is still to make a deliberate effort to consume a magnesium-rich diet.

The less magnesium in your diet, the greater your risk of stroke, say Swedish researchers who conducted a meta-analysis of several studies that enrolled nearly 250,000 participants and followed them for up to 13 years. Magnesium protects the brain against reduced blood flow in several ways, the investigators report in the American Journal of Clinical Nutrition. It lowers blood pressure, diminishes the risk of diabetes, a known contributor to stroke, and slows the oxidation of fats in the bloodstream.

A study of more than 14,000 middle-aged men and women in different parts of the U.S. shows that increased levels of magnesium in the blood–a more precise measure than dietary intake–are inversely associated with the incidence of ischemic stroke. Those with the lowest blood levels of the mineral had the highest rates of hypertension and diabetes, an association that held through the 15-year follow-up. Those who had higher levels of magnesium had a 36 percent lower risk of ischemic stroke.

What public health officials call an “alarming rise” in Type 2 diabetes may begin in childhood with low intake of magnesium. Researchers find that magnesium deficiency directly creates insulin resistance in obese children. Magnesium is a co-factor for multiple enzymes involved in carbohydrate metabolism, and mineral lack impairs insulin uptake by cells. One study showed just how prevalent magnesium deficiency has become; it affects 27 percent of healthy children and 55 percent of obese ones.

Give healthy people a four-week trial of magnesium supplements and what happens? There are widespread shifts in many metabolic and inflammatory markers and changes in the expression of 58 genes, report researchers from UCLA and Harvard University. The pilot trial of magnesium in 14 healthy overweight volunteers suggests that the mineral increases the body’s insulin sensitivity and directly affects pancreatic cells to reduce insulin secretion. The pattern of gene effects parallels improved insulin sensitivity.

In general, the best food sources of magnesium are whole grains, nuts, and green leafy vegetables. Specific foods with high magnesium content include: pumpkin seeds, spinach, swiss chard, soybeans, sesame seeds, halibut, black beans, cashew nuts, almonds, and many more. Yet a number of studies suggest that the magnesium content of foods, especially vegetables, is falling and has been doing so for decades. Experts point to mineral depletion of soil by pesticide use; fertilizer magnifies the effect.