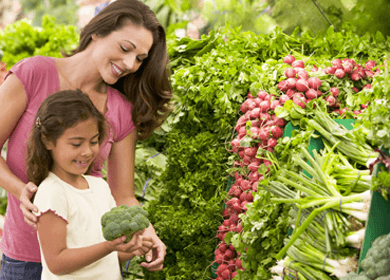 Nobody knows just how much of a risk toxins in our food really pose. Most of the associations between chemical exposures and disease are just that–associations. But we’re exposed to dozens, if not hundreds, of chemicals, and the effects of some multiple exposures may be more than the sum of their parts, say experts. Or, in some cases, they might cancel each other out.

What’s more, toxins get into our bodies through more than just food. We’re exposed to them through our carpets, lawn chemicals–even our clothing.

1. The Effects of Pesticides

From rat (and bug) poisons to sprays that keep lawns lush and crop yields high, “pesticides” include hundreds of chemicals. Some interfere with animals’ nervous systems; others disrupt hormones, causing abnormal growth that kills the plant or animal. Thus, it’s not surprising that synthetic pesticide exposure is linked with diseases of the nervous system and problems with cell growth, including reproductive problems and some cancers.

What You Can Do to Avoid Pesticides

–Start a kitchen garden! It’s easy to grow your own herbs and worth doing: a 2011 report revealed that cilantro is often laced with pesticide residues.

–Buy organic fruits and vegetables, particularly those with the highest pesticide residues, such as apples, celery and strawberries.

–Consider a water filter certified by the Water Quality Association (wqa.org) or NSF International (nsf.org) to screen out pesticides from farms and golf courses that can leach into well water. (Even tap water may contain traces of unregulated pesticides.)

–Remove your shoes when you enter your home–and ask guests to do the same–to avoid tracking in pesticides sprayed on lawns.

2. What Are Dioxins and PCBs?

“Dioxins” are a family of chemicals (including some polychlorinated biphenyls, or PCBs) with known cancer-causing properties. Dioxins are by-products of combustion–released via industrial processes, volcanoes, forest fires, even backyard burn piles–widespread in the environment but in low levels. They take years to degrade and they accumulate in fat, so they concentrate up the food chain. More than 90 percent of our exposure to dioxins is through food, mostly meat, dairy, fish and shellfish.

What You Can Do to Avoid Dioxins and PCBs

–Select lower-fat sources of protein, including meat from grass-fed animals, which tends to be leaner than meat from animals raised on grains.

–Eat a balanced diet with plenty of fruit, vegetables and grains to avoid too much exposure from any given source (e.g., meat, dairy).

3. What Are Phthalates and How to Avoid Them

This group of chemicals is used to make soft, squishy plastics, such as rubber duckies, medical tubing and polyvinyl chloride, a.k.a. PVC. Some phthalates are used to make synthetic fragrances last longer. Research suggests that phthalates act as endocrine disruptors, interfering with the body’s hormone systems and potentially leading to reproductive abnormalities, problems with fertility and increased risk for diabetes.

What You Can Do to Go Phthalate Free

–Choose personal-care products (e.g., shampoos, lotions) and household cleaners free of synthetic fragrance, which often includes phthalates. Opt for those scented with essential oils or nothing at all. “Fragrance-free” or “unscented” on the front of a product sometimes means that the final product doesn’t have an odor; fragrance may have been added to mask another smell. Scan the ingredient list if there is one; if fragrance is listed, it’s often synthetic. (Some manufacturers of safe natural products list natural fragrances this way, too, so if you’re in doubt, contact the company for more information.)

–Make the bulk of your diet minimally processed fresh foods. Processing and packaging can introduce phthalates into your food.

Research has suggested that 98 percent of Americans contain trace levels of PFCs (perfluorocarbons), chemicals that are used to repel water, grease and stains and are found in nonstick cookware, clothing, carpeting, furniture and food containers. Our bodies absorb PFCs through food, our skin and via fumes from overheated pans. They’re linked with liver damage, developmental problems, cancer and, according to one 2011 study in the Journal of Clinical Endocrinology and Metabolism, early menopause.

What You Can Do to Avoid PFCs

–Opt for cast-iron (including ceramic-coated) or stainless-steel pots and pans.

–When using nonstick cookware, don’t cook over high heat and use wooden or other nonmetal utensils to prevent scratches.

–Look for clothing made from recycled polyester and polyurethane, which is naturally waterproof, and wax-coated clothes, which repel water and are PFC-free.

We drink water to stay hydrated and flush out toxins. But could tap water actually be exposing us to more potentially harmful chemicals? Perhaps. A 2009 analysis by the Environmental Working Group found a whopping 315 pollutants in U.S. tap water, including arsenic (a heavy metal) and pesticides. More than half of the compounds are not regulated by the EPA, which means they can legally be present in tap water in any amount.

For instance, perchlorate–a currently unregulated chemical (though that’s soon to change, the EPA announced in early 2011) that’s used to make rocket fuel, flares and explosives–contaminates the drinking water of up to 26 million Americans. The chemical has been shown to reduce thyroid hormone production; experts worry about the risks it poses particularly to babies and children.

“Potentially, even a very mild degree of low thyroid function could have an adverse effect on cognitive outcomes for a fetus. However, no studies to date have shown effects of low-level perchlorate exposure on thyroid function in pregnant women,” says Elizabeth Pearce, M.D., an endocrinologist at Boston University School of Medicine.

In December 2010, the Environmental Working Group also reported finding hexavalent chromium (chromium-6), the “Erin Brockovich” contaminant that the EPA considers “likely to be carcinogenic to humans,” in the drinking water of 31 U.S. cities, including Chicago and Los Angeles. In the wake of this report, the EPA is reassessing the “oral reference dose” (or upper limit of what is considered safe), with a final ruling expected by the end of the year.

What You Can Do for Better Water

–Have your water tested, especially if your water comes from a private well or you live near a plant that might use perchlorate or in an area, like parts of California, where chromium-6 is a known a problem, says Pauli Undesser, M.S., director of regulatory and technical affairs of the Water Quality Association. In fact, says Undesser, it’s a good idea for everyone to test their tap water. (Call the EPA’s Safe Water Hotline: 800-426-4791 to locate a laboratory. Cost starts around $20.)

–Once you know what’s in your water–mercury, lead from piping or even pesticides–you can choose a filter certified by NSF International or the Water Quality Association to screen specific contaminants. Often, a $20 carbon-based Brita pitcher with a filter will do the trick. Don’t assume that bottled water is better: per the FDA, it must meet the same standards as tap.

BPA (bisphenol A) is a chemical traditionally used to make hard, clear plastics–including food containers, reusable water bottles and some baby bottles–and the resins lining some food cans. It leaches into food, particularly acidic items, such as tomatoes, or when containers are scratched or heated. Similar in structure to estrogen, BPA is considered a so-called endocrine disruptor. Based on animal and (limited) human studies, scientists are concerned that BPA may be linked with prostate and breast cancer, infertility, heart disease and diabetes.

What You Can Do to Avoid BPA

–Drink from reusable water bottles made of glass, stainless steel or BPA-free plastic. If plastic is labeled with a “7” recycling code and not marked BPA-free, it could contain the chemical. (Unless labeled BPA-free, aluminum bottles may be lined with the compound.)

–If you use plastic containers, choose BPA-free, don’t put them in the microwave and do hand wash them: a 2003 study found that plastic bottles released more BPA after they were cleaned in the dishwasher.

–Opt for fresh or frozen fruits and vegetables whenever possible. For things like tuna, beans, broth and diced tomatoes, look for BPA-free packaging. Consider making broth and cooking and freezing beans.

–Switch to a pour-over ceramic or glass coffee maker, such as Melitta or Chemex, as electric makers made of plastic can leach BPA.

The most common exposure to mercury–which is both naturally occurring and man-made–is from eating contaminated fish. Other sources: compact fluorescent light bulbs (CFLs), silver dental fillings and batteries. In high doses, mercury can harm the nervous system, heart, lungs, kidneys, and immune system; even in low levels it can affect brains of young children, which is why the U.S. Environmental Protection Agency and the U.S. Food and Drug Administration have issued seafood guidelines for children and pregnant/nursing women.

What You Can Do to Avoid Mercury

–If you do break a CFL bulb, leave the room for 10 minutes and open a window to let the room air out. To clean it up, brush it into a sealable plastic bag or glass jar with a lid using stiff cardboard and wipe the area with damp paper towels. Don’t vacuum, as that could further disperse particles. And stay calm: one CFL contains only about as much mercury as 47 servings of swordfish. More tips at epa.gov/cfl/cflcleanup.html.

–Keep “button batteries” (used in remote controls and musical cards) out of kids’ reach. They contain a mix of toxic chemicals, including mercury, that, if swallowed, are very harmful.

EatingWell is a magazine and website devoted to healthy eating as a way of life. Online at www.eatingwell.com