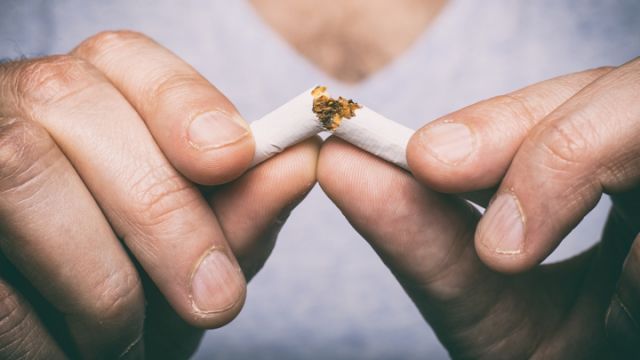 You’ve smoked since college, one or two here and there, and you’ve never experienced any ill effects from your bad habit. You’re a social smoker, and in fact, you seem to be a healthy smoker.

Just because you don’t have a nagging cough or trouble breathing doesn’t mean you’ve escaped the lung-damaging effects of inhaled tobacco smoke, two major new studies indicate, including one the author originally titled “Myth of the Healthy Smoker.”

COPD, or chronic obstructive pulmonary disease, is perhaps one of the most common lung diseases caused by smoking. Current and former smokers could get a spirometry, a test that checks how much air can be inhaled and how quickly it’s exhaled. Trouble is, most people with a history of smoking will never get this test during a routine medical exam, so they won’t find out they’re unhealthy this way. Then, even if they have the test, the new studies show the tests often fail to detect serious lung abnormalities that lead to chronic cough, sputum production and compromise a person’s breathing, energy levels, risk of serious infections, and quality of life.

Actually, there’s simply no such thing as a healthy smoker. Here’s why:

You work out and eat right, so you assume you’re healthy. But that may not be true. “Current or former smokers without airflow obstruction may assume they are disease-free,” but that’s not necessarily so, one of the research teams showed. Researchers estimated about 35 million current or former smokers older than 55 in the United States have unrecognized smoking-caused lung disease or disorders. Even if they quit smoking, many, if not most, of these individuals will get worse in time. Most likely, they never will be referred for pulmonary rehabilitation, a treatment that can help prevent oncoming disability.

Your annual bout of bronchitis probably means something.

Even when the spirometry results are normal, smokers have respiratory symptoms that they think little about because they’re so used to it. “A lot of smokers have respiratory symptoms,” said Dr. Elizabeth A. Regan, the lead author of one of the new studies published in JAMA Internal Medicine last year and a clinical researcher at National Jewish Health in Denver. “They get sick often, are more likely to be hospitalized with bronchitis or pneumonia, and have evidence on CT scans of thickened airway walls or emphysema that impair breathing.”

Your symptoms are not just because you’re aging.

Dr. Prescott G. Woodruff, lead author of the second study, published May 12 in The New England Journal of Medicine, said in an interview, “Smokers have much more lung disease than we previously thought. The 15 to 20 percent who get C.O.P.D. is a gross underestimate.” Regan’s team reported that symptoms such as shortness of breath and inabilities in exercise are too often dismissed as normal aging.

Your doctor may never warn you.

Because you’ve seemed to escape symptoms so far, if you’re a current smoker you may think you’re safe, so you continue smoking. Truth is, your doctor may never tell you that you’re in danger. Doctors often are reluctant to urge patients with symptoms to quit smoking, so they may be even less likely to recommend smoking cessation to patients with normal spirometry test results.

The tests are not the best.

“We live happily in the world thinking that only a small percentage of people who smoke get this devastating disease,” Regan, told The New York Times during an interview. “However, the lungs of millions of people in the United States are negatively impacted by smoking, and our methods for identifying their lung disease are relatively insensitive.”

You could have other ailments.

Lung disease may not be the only adverse health effect from smoking. Toxins from the smoke can damage any organ in the body. Since the first surgeon general’s report on smoking 52 years ago, the list of potential ailments such as lung cancer has grown exponentially. The list now includes COPD, heart disease, many deadly cancers, stroke, high blood pressure, blood clots, peripheral artery disease, type 2 diabetes, rheumatoid arthritis, cataracts and macular degeneration.

If you smoke, that is the disease.

The new study findings by the two investigative teams inspired Italian researcher, Dr. Leonardo M. Fabbri of the University of Modena and Reggio Emilia in Italy to write an editorial accompanying The New England Journal of Medicine study, titled, “Smoking, Not COPD, as the Disease.” Fabbri explained that the study results “suggest that smoking itself should be considered the disease and should be approached in all its complexity.”