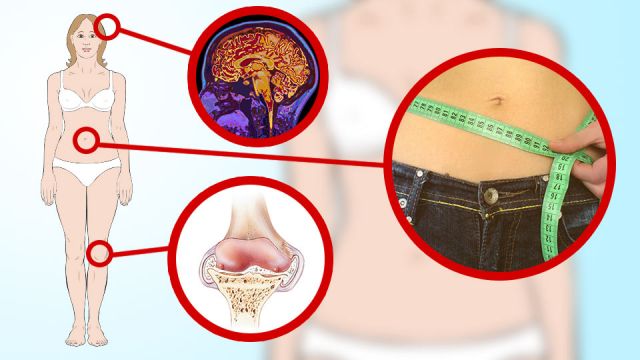 Anyone struggling to lose weight knows that carrying those extra pounds not only affects the body but also the mind. That’s because overweight people are more prone to developing heart disease, diabetes, cancer and dementia. But here’s the good news: Even losing a small amount of weight can have a huge impact on your overall health. In fact, losing just ten pounds can result in enormous gains and potentially life-saving changes.

In this day of fast food and overindulgence, most adults in the U.S. are overweight or obese. Thanks to binge-watching Netflix and binge-snacking on calorie-dense foods, a large portion of the population maintains a fairly sedentary lifestyle. And, for those who make no effort to change, becoming overweight or even obese may be an unavoidable consequence of living a modern lifestyle. But research reports that even dropping a little excess weight can have some serious health benefits. Here’s what you can expect to happen by dropping ten extra pounds.

Shedding ten pounds will lower your cholesterol, but only if you incorporate a healthy fat-rich diet with low carbs. So, what does this mean? Well, according to a study published in the Journal of the American Heart Association, overweight women who ate a walnut-rich, high-fat diet combined with low carbohydrates — so, more protein — not only lost weight but also lowered bad cholesterol. Incidentally, they also improved their good cholesterol levels.

2. Your blood pressure will improve

Can losing ten pounds actually lower your high blood pressure? Yes, it can, according to a study published in PubMed Health. Researchers reviewed eight studies that lasted about a year, with a total of 2,100 participants. They looked at the effect various diets had on blood pressure. Participants who lost about nine pounds on average lowered their blood pressure. The systolic value fell by 4.5 mmHg, and the diastolic by 3 mmHg.

Dementia is a condition that few people really think about until it’s too late. Alzheimer’s disease is the most common type of dementia. And according to the Centers for Disease Control and Prevention (CDC), symptoms of Alzheimer’s can first appear after age 60 and progress with age. In fact, the CDC reports that as of 2015, 47 million adults living in the U.S. —  age 65 or older — are living with Alzheimer’s. And by the year 2060, that number is predicted to climb to about 98 million. The Alzheimer’s Society suggests keeping a healthy weight and staying physically active to help ward off dementia.

For anyone who has weight fluctuations, you may be surprised to discover that a good night of sleep is one of the best contributors towards maintaining a healthy weight. But here’s the thing; holding onto extra weight — like an additional ten pounds — can increase your risk of developing sleep apnea. And sleep apnea can prevent you from having a good night sleep, which keeps your weight up. So, it’s a vicious cycle.

Eighteen million Americans have sleep apnea. It can occur when the upper airway becomes blocked repeatedly during sleep, according to the National Heart, Lung and Blood Institute (NIH). As a result, airflow is reduced or completely stops. Losing that ten extra pounds could mean a difference between continually waking throughout the night and having a great night sleep.

By losing even a small amount of weight, people with type 2 diabetes can become less insulin resistant, meaning they can use insulin to naturally regular blood glucose levels. So, strive to lose ten pounds and then go from there.

6. Your joint pain may disappear

Losing extra weight reduces pressure on your joints, suggests the Arthritis Foundation. In fact, overweight adults with knee osteoarthritis found that losing just one pound of weight equals four pounds of pressure. In other words, losing just ten pounds would relieve 40 pounds of pressure from your knees — providing immediate and long-term health benefits.

7. You’ll reduce your risk for cancer

The links between body weight and cancer are complicated. However, carrying extra weight is linked to an overall increased risk of cancer, according to research from the American Cancer Society. In fact, excess body weight is thought to be responsible for about eight percent of all cancers in the U.S. But even a ten-pound weight loss has health benefits, and reduces levels of certain hormones that are related to cancer, such as insulin, estrogens and androgens.

8. You’ll feel better about yourself

If you change your game plan when it comes to nutrition and exercise, you can easily drop ten pounds. And by doing so, you’ll help prevent some potentially deadly illnesses, alleviate pain and improve your quality of life. Additionally, you’ll feel better about yourself. Now that’s a big gain for a little weight loss!