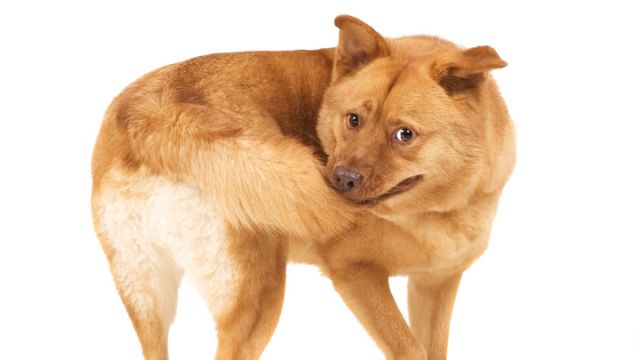 It’s fun to watch your dog chase his tail — a triumph of hope over experience in trying to catch it.

Tail chasing isn’t always a harmless activity. If your dog chases his tail to excess, this may indicate a physical or psychological issue. Always consult your veterinarian if your dog engages in frequent, non-stop tail chasing.

Puppies are the most frequent tail chasers. They’ve discovered the appendage always following them around, and they want to catch it. It’s an adorable behavior when they’re little, but they should outgrow regular tail chasing.

Some breeds tend to chase their tails more than others. This may make tail chasing a hereditary trait. German shepherds are especially prone to tail chasing, even as they age. It’s also more common in terrier types and Australian cattle dogs.

Dogs with lots of energy and insufficient outlets for expending it may engage in tail chasing. If you suspect that’s the case, take your pet for longer and more frequent walks, or let him run off-lead in dog parks or other safe fenced-in areas.

Dogs confined to small areas with limited movement often result to tail chasing. Unless your dog is recuperating from an injury and must stay confined, giving him a larger space to stay when no one is home should stop the chasing.

You know your dog loves attention. Just in case you’re not showering him with affection at a particular moment, he might indulge in antics he knows will catch your eye. Tail chasing is one of them. If you make a fuss over him when he chases his tail, he’s likely to persist in doing it. Be careful – for many dogs, negative attention is better than no attention. Even if you scold him for constant tail chasing, he’s still got your attention. If he’s really chasing his tail too much, try to distract him rather than allowing him to continue. Never reward tail chasing with a treat – you’ll create a monster.

If your dog feels anxious, tail chasing offers him some comfort. This is behavior you definitely want to nip in the bud, because it easily becomes compulsive.

It’s one thing if you dog chases his tail on occasion, or even briefly on a daily basis. If he’s constantly tail chasing, it’s a compulsive behavior. A veterinarian may prescribe anti-anxiety or antidepressants to break the cycle. If you prefer a more natural approach, try using essential oils such as lavender, sweet orange or bergamot in a diffuser, or place a few drops of the oils on a cloth or bandana and gently tie it around the dog’s neck. Replenish the oils every four to six hours.

Behavioral modification can break the cycle of incessant tail chasing. You must recognize when your pet is about to start tail chasing, and immediately offer an alternative activity. That might consist of a walk, a game of fetch or a quick training session – go through sit, down and stay.

Dogs don’t always chase their tails for fun. It’s possible that the tail is causing them discomfort. The base of the tail is a prime spot for fleas to nest, and ticks might latch on to the dog’s tail for a blood meal. Always check your pet for any signs of flea or tick infestation, and use natural or other remedies to keep parasites at bay. A fine-toothed flea comb reveals the presence of actual fleas or flea dirt – tiny black specks of flea feces. Worms are another tail chasing trigger, so make sure your dog is on a good deworming program. Bring fecal samples to the vet to test for parasites.

Injury is another possibility. Perhaps his tail got caught in a door, or suffered some other mishap. Dogs lick their wounds, but most dogs can only lick their tails if they’re in a prone position. In rare cases, tail chasing is a sign of epilepsy and relates to pre-or post-seizure activity.