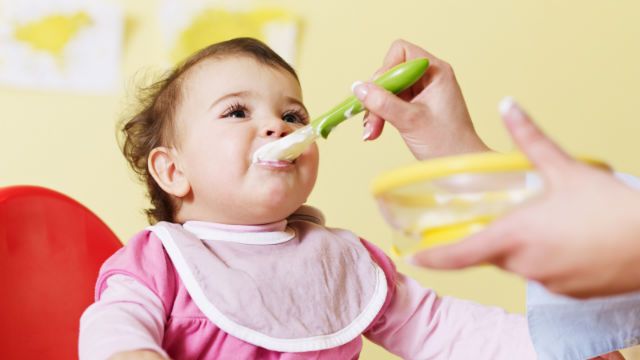 Processed foods are evil – and we’re not likely to stop saying it until people stop eating them. While the outrageously high sugar and refined salt content of processed foods for adults is bad enough (not to mention the artificial ingredients), you really don’t want to be feeding these things to your toddler.

While this may seem obvious, many parents, during the course of the most hectic days, may turn to packaged toddler meals and snacks, to save some time and sanity. However, new research has found that the high levels of added sugar and sodium in these foods may actually be setting your children’s taste preferences for the course of their lives. And not in a good way.

According to researchers at the CDC, who surveyed foods manufactured for toddlers between the ages of one and three, one third of the dinners contained added sugar (as well as most of the snacks), and about three-quarters of the dinners were high in sodium. Previous research has found that children have twice the tendency to prefer sugar than adults, and that babies are able to detect salt when they are a few months old.

Julie Mennella, a psychobiologist at the Monell Chemical Senses Center, states, “the child’s biology really makes them vulnerable for the foods that the food industry is making, that put in a lot of added sugar and salt.” She adds, “many drugs of abuse are co-opting the brain pathways that were designed for these tastes, not the other way around.”

The “drugs of abuse” in question here are sugar and refined salt. According to Mennella and her fellow researchers, when children eat these foods at a young age, it may affect their preferences later in life. For example, they will expect foods to taste sweeter if they have been exposed to sweetened foods regularly, and will also expect foods to likewise taste saltier.

This may lead to tendencies of unhealthy snacking later in life, as the now-adult seeks to satisfy cravings for tastes that have been deeply ingrained in them from childhood. As Mennella summarizes, “so if you only feed the child sweetened yogurt, they are going to prefer sweetened yogurt.”

Sugar has been widely found to be a poison, and to contribute to obesity, type 2 diabetes, depression, immune system suppression, and cancers, to name only a few of its ill effects. And, while real, natural salt is healthy, processed table salt is not, and does not deserve to be on your child’s plate.

Also, as we’ve previously reported, other scary additives have been found in baby and toddler foods – including pesticides, contaminants and even lead.

We would take that recommendation a step further and say avoid the commercial toddler “food” altogether – it’s so easy to make your own. For younger children, simply pureeing fruits and veggies works fine. For older toddlers, mashing up parts of healthy meals you cook at home does the trick. You can also pre-puree, and refrigerate or freeze portions for your child to eat on the go.

By keeping the food coming from your kitchen, and not from a corporation, you’ll rest easier knowing your child is safe.