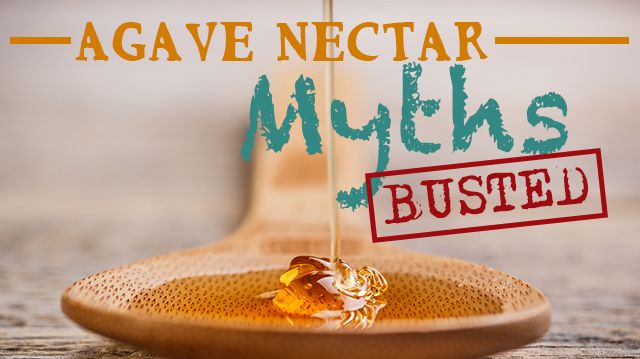 Modern-day “snake-oil salesmen” found their sweet poison to peddle when agave came onto the market. By now most of us know the evils of sugar. So when agave hit the scene with its marketing hype, declaring that it was our sweet savior, we bought it hook, line and sinker. Now we know different. Experts agree: Agave isn’t the healthy sugar alternative we thought it was. Yet there are many who still believe the agave myths. Let’s delve into those myths and separate fact from fiction.

What exactly is agave?

If you’ve had tequila, then you’ve had agave. Blue agave is an exotic plant that thrives in the volcanic soil of southern Mexico. The word “agave” means noble. When fermented, agave turns into Mexico’s most famous alcoholic beverage. Agaves are large, spiky plants that look like cacti or yuccas, but they’re actually succulents similar to aloe vera.

The sweet agave nectar is actually more syrup-like, similar in character to corn syrup, but with a lighter fluidity. Truthfully, the agave nectar you find on your grocery store shelf is nothing like the traditional Mexican sweetener, although the starting process is the same.  Agave starch is highly processed and converts into a fructose-rich syrup. And herein lies the myths.

Agave is better for you than sugar

The truth is, most of the agave nectar products you find at the grocery store or health store are super-condensed fructose syrup with little nutrient value. Unfortunately, mass marketing exaggerated agave’s benefits as being a healthy alternative to sugar, which it is not. In 2010, agave netted $1.2 billion, according to Dr. Josh Axe, bringing it into “big sugar” territory.

When we compare common sweeteners, both sugar and corn syrup have two simple sugars — glucose and fructose. While glucose and fructose look similar, they each affect the body differently. Fructose doesn’t raise blood sugar levels in the short-term, but it does contribute to insulin resistance when eaten in large amounts. Eating too much fructose may contribute to poor cardiovascular health and could increase the risk for metabolic syndrome, suggests Dr. Mehmet Oz.

Now let’s look at agave. Agave nectar actually contains 70 to 85 percent fructose, which is much higher than sugar and high-fructose corn syrup. Therefore, people who eat a lot of agave place themselves at risk for weight gain, particularly belly fat. In addition, agave may actually increase insulin resistance for both diabetics and non-diabetics, according to Dr. Oz. So if you must add sweeteners to your diet, agave nectar is not a good choice. However, there are healthier options such as raw honey, maple syrup and natural stevia.

Originally, experts believed that because agave has a low-glycemic index and doesn’t spike blood sugar like regular sugar does, it would be a good alternative for diabetics. But even though agave doesn’t contain a lot of glucose, it does contain a lot of fructose.

When you eat fructose, your body doesn’t release as much insulin as it does when you consume sugar. That’s good because it affects how your body releases leptin, a hormone that controls appetite. But where experts say it all goes out of whack is when the fructose-rich agave you’ve consumed converts to fat — and rapidly. While fructose does not readily raise blood sugar levels, research suggests that excessive fructose consumption creates a liver-function imbalance, promoting obesity. The less fructose you consume, the better.

Agave is unprocessed and organic

The name, along with the pictures and descriptions on the product labels, alludes to agave being an unprocessed sweetener that has been used for thousands of years by native people in central Mexico. It is true that natives allowed the sap from one species of agave to ferment naturally, creating a mild, alcoholic beverage with a very pungent flavor known as pulque. It is also true that they made a traditional sweetener from the agave sap or juice called miel de agave by boiling it for several hours.

However, the agave that we find today in stores is neither of these traditional foods. Converting agave glucose and inulin into the sweet syrup is similar to the process used to convert cornstarch into high-fructose corn syrup. To extract the liquid sweetener, the plant is cut and pressed. While the liquid is highly sweet, it still contains healthy compounds like fructans, which can have positive effects on the metabolism and insulin. However, when the liquid is processed into syrup, manufacturers break the fructans down into fructose, through heat and genetically modified enzymes, destroying any possible health benefits.

Agave is an artisan product

No, agave is not an artisan product. The consumer has been misled to believe it is since agave syrup is available in two colors: clear or light, and amber. What’s the difference, you ask? Apparently, due to poor quality control in the agave processing plants in Mexico, occasionally the fructose becomes burnt after the heating process, creating a darker or amber color. Yet the labels create the impression of an artisan product similar to light or amber maple syrup or beer.

The more we learn about agave, it’s easy to see how we’ve been duped into believing it’s a naturally better alternative to sugar. But experts are now speaking out to let the public know that the agave health claims are simply a myth.