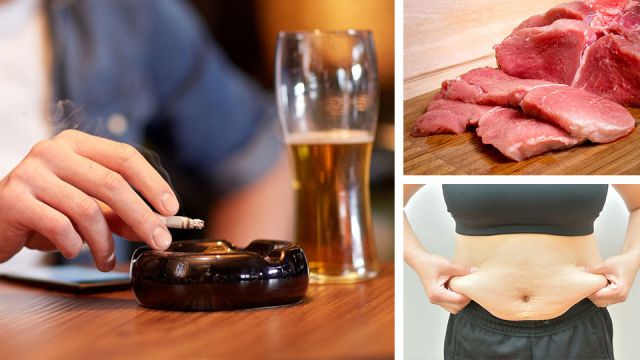 By the time 2017 comes to an end, an estimated 1,688,780 people in the U.S. will be diagnosed with cancer. Over 600,000 people will die from cancer-related deaths. Being diagnosed with cancer is surely scary and life-changing. But what if there were things you could do to prevent cancer?

Turns out, a new study from the American Cancer Society has shed some well-needed light on cancers, and which ones are preventable by simply making the necessary lifestyle changes. Here’s what you can do to prevent certain cancers from taking hold of your life.

If cancer isn’t epidemic, it sure feels like it is. Most people today have some sort of first-hand experience with cancer, either through personal diagnoses or by witnessing a loved-one battling cancer. Not surprising, since one in three Americans will be diagnosed with cancer, often before the age of 65.

Recently, however, a large new study from the American Cancer Society found that certain cancers could be prevented by making the necessary lifestyle changes. That’s great news! The study, published in the journal CA: A Cancer Journal for Clinicians, looked at a total of 1,570,975 cancer cases of which over 580,000 resulted in death. During the study, 26 cancers and 17 risk factors were analyzed.

Here’s what you must modify to help prevent cancer

Did you know that only 15 percent of cancers are due — and only in part — to inherited genetic defects? In fact, when comparing the West to Asian countries, the most common cancers such as prostate, breast, colon and lung are much higher in the West.

Yet, when Asians immigrate to the U.S., Western cancer rates seem to catch up within one or two generations. While living in Asia, Asians are protected not by their genes, but by their lifestyle, reports The New York Times.

As a Westerner, there are lifestyle and diet changes that you can make. Actually, there are 17 factors that contribute to cancer, which researchers labeled as “modifiable” since it’s possible to take active measures to change them. Six of those risk factors included infections, but we’ll get to that shortly. Eleven risk factors that lead to cancer — but are modifiable — include:

According to the study, the following infections are also modifiable, meaning you can take active measures to change them. They include:

One of the best ways to reduce your chance of dying from cancer is to prevent the disease from developing in the first place. Forty-two percent of all cancers and over 45 percent of all cancer deaths may be prevented if risks are modified. Smoking, excess weight and alcohol consumption topped the list as risks factors associated with developing cancer.

Smoking is the highest contributor to cancer according to the study. It’s linked to 19 percent of all cancer cases and almost 29 percent of related deaths. Lung cancer tops the list with smoking-related cases, followed by cancers of the upper aerodigestive tract, oral and nasal cavity and the urinary bladder cancer. Here’s how to quit, naturally.

Excess weight on the body is the second highest contributor to cancer and is linked to 7.8 percent of all cancer cases and 6.5 percent of related deaths. It’s accounted for more than one-half of all cancers of the uterus and one-third of gallbladder, liver and kidney.

Drinking too much alcohol

Too much alcohol is the third largest contributor to cancer and is linked to 5.6 percent of all cancer cases and 4 percent of related deaths. Almost one-half of oral cavity and pharyngeal cancers in men and one-quarter of esophageal, oral cavity and pharyngeal cancers in women were linked to alcohol consumption. But, by far, excessive alcohol consumption is one of the biggest contributors to female breast cancer, suggests the study.

Here’s what you can take away from this study. Obviously, if you smoke, you should quit. Speak to your doctor for help if trying to quit becomes too overwhelming. Poor diet also plays a major factor in cancer. So, eat plenty of fruits and veggies and other foods from plant sources — like whole grains and beans. And of course, limit your red meat consumption and avoid processed meats. Avoid obesity. If you choose to drink alcohol, do so in moderation. Meanwhile, start exercising daily. At the very least, start walking for 30 minutes a day. In the end, these are pretty minimal changes for keeping cancer at bay!