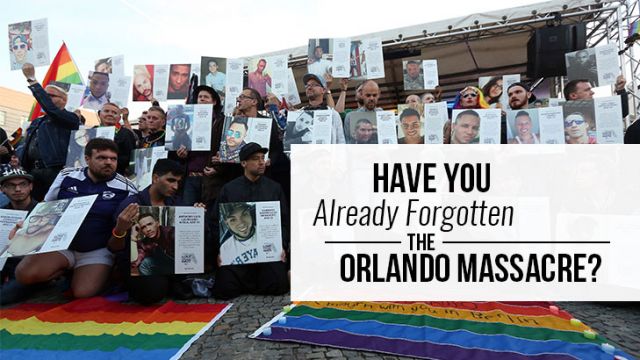 Are you concerned about terrorism in the wake of the Orlando shooting? Don’t worry, you won’t be for very long, at least according to data from pollsters. In fact, most of us will forget about it in just a few months.

That’s according to Gallup, which finds that public concern over terror tends to spike after mass shootings but then quickly subsides. In an analysis of 2015 survey data, the pollster found terrorism concern surged late last year, only to diminish as quickly as it arose.

For example, a November poll conducted before the massacres in Paris and San Bernardino found just 3 percent of Americans viewed terrorism as the most important challenge facing the country. That figure rose to 16 percent in December, after the two attacks.

That might not sound like much, but it means the number of people concerned about terrorism quintupled in one month. The Paris attack in November 2015 left 130 people dead, while 14 people were killed in early December after a shooting spree in San Bernardino, Calif.

The spike in public concern over terror in late 2015 was notable since it trumped traditionally more pressing issues for voters, such as the economy, which was seen at the time as the biggest problem for the nation, at 9 percent of the population. Meanwhile, governance was seen as the country’s biggest problem, by 13 percent of those surveyed.

As Gallup’s Jim Norman put it, “It was the first time in 19 months that the public had named an issue other than the government or the economy as the nation’s most important problem.”

Yet renewed public concern over terrorism was short-lived. Just a month later, terror slipped back into third place at 9 percent, while government and the economy reclaimed their places as the biggest issues in the minds of ordinary Americans (16 percent and 13 percent, respectively).

Gallup’s latest poll on public concerns found terrorism had returned to its pre-Paris/San Bernardino levels, at around 4 percent. This figure was found during a poll back at the start of June, a few weeks before the Orlando attack.

Commenting on the data, Norman noted, “Terrorism rose to the top of the list of Americans’ concerns about their nation last December after deadly attacks in Paris and San Bernardino, and it could happen again in the wake of Sunday’s horrific massacre in Orlando. But if the same pattern occurs this time, terrorism would likely not remain the most important problem for long.”

Reaching back further in time, Norman explained that this pattern has occurred time and again. “A month after the 9/11 attacks in New York City and Washington, D.C., 46 percent of Americans listed terrorism as the most important problem facing the nation,” he said.

However, Norman said that number “slowly dwindled” before terrorism was eclipsed by concerns over the economy in 2003. “Since then, a few events have triggered a spike in mentions of terrorism as the nation’s most important problem, but each time, concerns faded within a few months,” he said.

It isn’t just Gallup that has noticed this trend. After Paris and San Bernardino, in mid-December 2015 the Pew Research Center found 29 percent of Americans viewed terrorism as the greatest threat to the country. Another 7 percent specifically cited the Islamic State group as the biggest threat, while 7 percent viewed national security generally as the biggest challenge.

In a different Pew survey a year earlier, just 4 percent of respondents cited any of these issues. In yet another survey, in December 2015, Pew found 56 percent of Americans felt the government wasn’t doing enough to fight terrorism.

Interestingly, almost the exact opposite was true two years earlier, when 47 percent said counter terrorism and other national security measures had gone too far, particularly in restricting civil liberties.

Of course, many Americans likely would argue that the Orlando attack wasn’t a case of domestic terrorism at all. The shooter had no clear operational links to any terrorist organization, leading pundits to suggest the incident would be better described as a hate crime.

Either way, the shooting clearly has sparked renewed discussion and concern over terrorism, particularly the role of the Islamic State group, which continues to dominate vast swathes of Syria and Iraq.

However, the takeaway from all of this is that most of the time Americans are primarily concerned with the economy and the government. Terrorism is an issue that rears its head every few years but is largely forgotten by the overwhelming majority of the population within a relatively short period of time.

As horrible as the Orlando massacre was, there’s a good chance things will be no different this time.