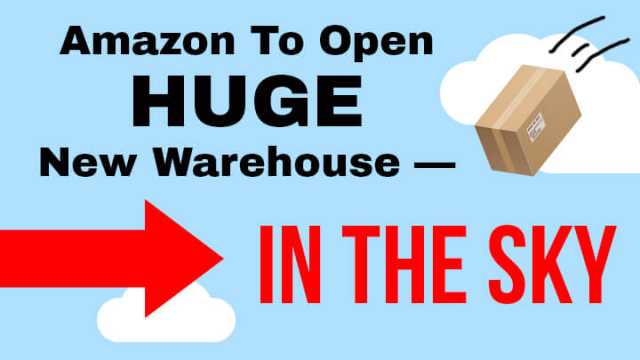 Amazon has filed a patent for a huge flying warehouse that would be loaded with fleets of delivery drones. Airships, or dirigible balloons, would visit areas where specific goods are high in demand, such as sporting events or festivals.

Here’s how it would work: Amazon would sell things like food or souvenirs. A series of support vehicles would restock the blimp-warehouse, while the balloons would cruise at around 45,000 feet. Drones would need little power as they glided down to make deliveries.

Drones typically have short ranges, as they are dependent on short-lasting batteries. The patented idea could be a way to get around this. However, companies often file patents as a proof-of-concept and may not have any intention to develop the idea further.

Amazon and other companies are already testing out commercial drone delivery in countries outside of the U.S. Earlier this month, Amazon made its first commercial delivery with a drone. It delivered a package in Cambridge, UK, just 13 minutes after it was ordered. The drone flew at up to 400 feet.

The drones live at the Cambridge fulfillment center, traveling along an automated track to the launch area. They then fly autonomously, with only GPS to guide them to their destination. They are capable of carrying items weighing up to five pounds. For now, delivery is only possible during daylight, when wind is low and there is good visibility. 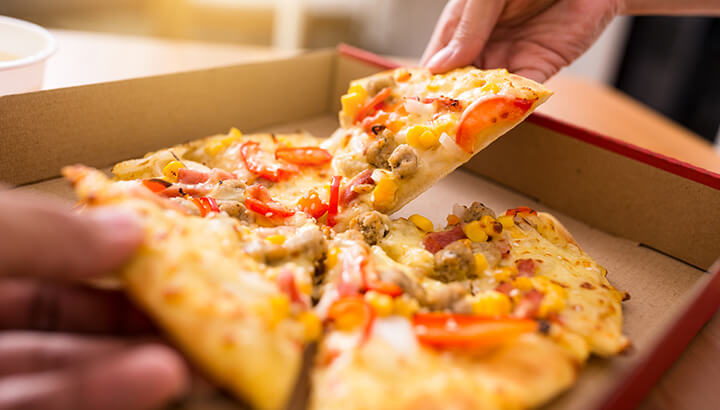 Meanwhile, Russians have been getting drone-delivered pizza since 2014. DoDo makes the deliveries with drones equipped with video cameras that are monitored by the restaurant’s manager, who makes sure the right customer gets the pizza. Also, the drone lowers the pizza with a cable, rather than lowering itself, so that no one can steal the actual drone. Francesco’s Pizza in Mumbai, India, also tested drone pizza deliveries in May 2014.

The UK is starting trials with drones in Tanzania to deliver blood and medical supplies to hard-to-reach areas. Tanzanian minister for health, Ummy Mwalimu said that the project will start out focusing on saving the lives of pregnant women, many of whom die due to labor complications. Tanzania is also using drones in its Tarangire National Park to deter animal poachers.

How to protect drones from compromise 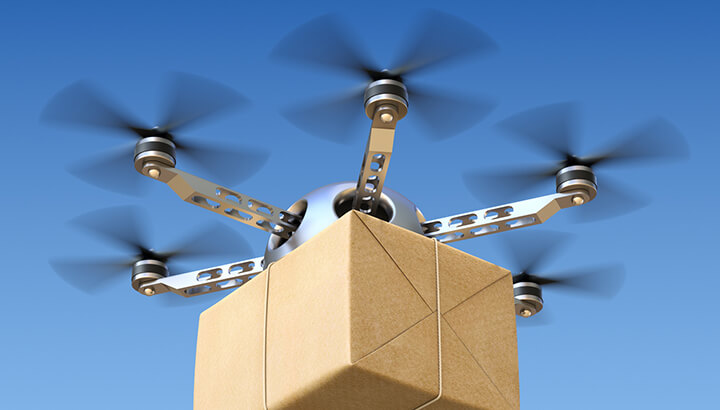 Similar to DoDo, Amazon is developing its own “compromise system” to protect its drones from violent attacks and from wireless signal jammers. So far, a person in Kentucky shot a neighbor’s drone after it hovered over his property too many times. Though Amazon can’t do anything in that scenario, it can gather information about the person or direct a drone to move to a safer place.

Its system also uses satellite signs, radio towers and the sun to orient the drone in the event of hackers. It also has an airbag or crash foam system to mitigate damages if the drone has to crash.

No drone balloon-warehouses in the U.S.

For now, U.S. regulations limit drone delivery within the country. They stipulate that a drone must be within physical site range of the person controlling it. Pilots have to also have a Remote Pilot Airman Certificate from the Federal Aviation Administration (FAA).

The current regulations mostly govern drones for hobbyists, surveyors and real estate photographers. However, they are an indication of where the FAA is heading when it finally releases regulations on drone delivery.

All of that could unravel under a Trump presidency, however. Rep. Bill Shuster (R-Pa.) says the president-elect is in favor of replacing the current FAA system with a private corporation.

The UK and Canada are both managing their national traffic control through private corporations. Delta, opposed to such privatization, says that costs have gone up as a result. Singapore on the other hand, is developing a drone traffic management system that includes designated takeoff and landing zones, as well as virtual lanes throughout the city.

One of the biggest shortcomings of drones is their inability to sense and avoid. That is, they bump into stationary and moving things.

Various models have been developed that use ultrasonic sensors, specialized software algorithms for 3D sensing and stereo cameras. These allow drones to detect objects up 65 feet away. But such models are still being tested. And drones find it hard to decide if they should fly around or over an obstacle, often just hovering on the spot when something gets in their way.

Until the bulk of drones have evolved to go around objects in their path, it is unlikely that big city dwellers will be getting wines and chocolate delivered by one yet.

What do you think? Do drones have more potential as humanitarian tools, as commercial aids or as war and spying tools?