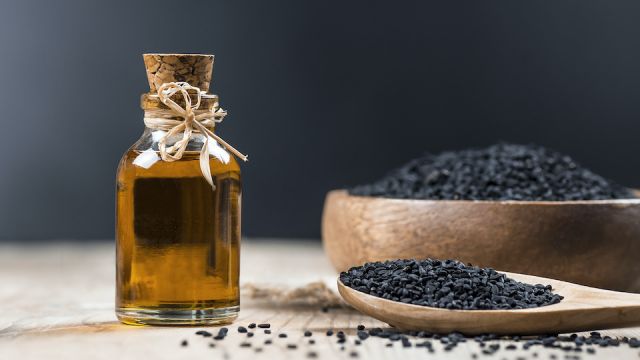 If you’ve been staying on top of natural health trends, you may have heard of black seed oil. This multipurpose oil has a time-tested reputation for treating many health issues and ailments.

Black seed hails from Nigella sativa, a flowering shrub that grows abundantly in the Middle East, Eastern Europe, and parts of Asia. The seeds are a traditional Middle Eastern spice used in a range of recipes, including bread and salads. The tiny black seeds can also be pressed to extract their liquid fat.

The history of black seed oil

For more than 3,000 years, black cumin seeds and their oil have been used for cosmetic, medicinal, and culinary applications. They were applied as herbal remedies, used as recipe ingredients and condiments, and prescribed as treatments for aches and topical irritations, including bites, sores, inflammation, and rashes.

According to historical sources, it is believed that Black Cumin Seed Oil was first used by the Assyrians of ancient Egypt, where it came to be used by renowned royal figures, such as Cleopatra and Nefertiti, who used it in their skincare routines, beautifying baths, and medicinal applications. In Northern Africa, it has been used traditionally for thousands of years to treat headaches, asthma, bronchitis, rheumatism, fever, cough, influenza, and eczema.

In Ayurvedic medicine, Black Cumin Seed Oil has been used in a wide range of applications, mainly for its stimulating, warming, and tonic properties, as well as for its uplifting effect on the mood. Greek physicians in the 1st century used Black Cumin Seeds to address toothaches, headaches, nasal congestion, and intestinal worms.

Many of these ancient uses have been proven by modern science, thanks to studies that have analyzed the properties of black seed oil. So how exactly does this wonder remedy work?

Many active components have been isolated from black cumin seed, including thymoquinone, thymohydroquinone, dithymoquinone, thymol, carvacrol, nigellimine-N-oxide, nigellicine, nigellidine, and alpha-hederin. These unique compounds are believed to act on bodily systems to create a myriad of health benefits. In particular, thymoquinone has been extensively studied and shown to possess pain-fighting and anti-inflammatory effects.

Here is a brief list of some of the most amazing benefits you can get from black seed oil.

The crude oil and thymoquinone extracted from black cumin seeds have been found to be effective against many types of cancer, including leukemia, lung, kidney, liver, prostate, breast, cervix, and skin cancer. Studies show that black cumin seed treatment is well tolerated and generally safe. The molecular mechanisms behind this anticancer activity are still not clearly understood; however, some studies have revealed that thymoquinone induces cancer cell death and activates anti-cancer pathways in the body’s immune system. One study showed that thymoquinone selectively attacked brain cancer cells without damaging healthy ones.

Black seed oil is said to boost the immune system and help fight infections. The compounds in the oil have direct antibacterial and antiviral effects, and they also work to improve the function of the immune system.

With its historically acclaimed moisture-retaining qualities, black cumin seed oil keeps skin elastic and fights damaging free radicals that cause wrinkles and fine lines. It tames redness and soothes irritation. The anti-aging function of black cumin seed oil is likely thanks to its excellent antioxidant and anti-inflammatory properties.

Black seed oil has long been known to benefit the metabolism, and recently a scientific review reported that black seed oil might have anti-diabetic properties and improve blood sugar levels.

An extract from black seed has been shown to possess heart-protective qualities, which help in curbing damages associated with heart attacks and boosting overall heart health. Several studies have demonstrated its ability to reduce harmful cholesterol, moderate inflammation, and stabilize blood pressure levels.

This wonder oil can help protect other important organs too. According to a 2013 study, black seed oil may reduce liver and kidney disease complications and improve organ structures.

Black seed oil may aid in the treatment of rheumatoid arthritis, according to a study that found patients had lower blood levels of inflammatory markers and reduced swelling in their joints after one month of taking black seed oil capsules daily.

How to use black seed oil

Now that you know all about the benefits of black seed oil, you’re probably keen to start using it in your daily life. But what’s the best way to take this strong-smelling, bitter oil?

When eaten, black seed oil has a flavor that’s reminiscent of cumin, pepper, and oregano. Its robust flavor means that most people won’t be using black seed oil as a go-to for dressing or stir-fry, but rather using it in small doses to flavor dishes from eastern cuisines. Start slow until you are used to the taste. The seeds can be used to flavor curries, pickles, and bread similarily to cumin or oregano.

The recommended daily dose for black seed oil is 1 to 2 teaspoons daily. For optimal freshness and to prevent rancidity, keep your bottle of black seed oil in a dark, cool place away from heat and direct sunlight. The oil is also available in capsules making for a convenient option for those who prefer to avoid the flavor.

You can also apply black seed oil topically to benefit the skin, hair, and nails. One alternative is to add the oil to massage oils, shampoos, and skin-care products.

Try incorporating a small dose of black seed oil into your daily health regimen to fend off many common health concerns and diseases.