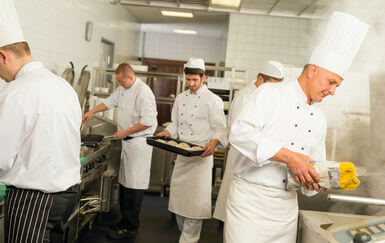 Eating out at a restaurant – even one serving organic foods – is an inherently risky endeavor. When one does not see where their food comes from, and how it is prepared, it is impossible to know that it is truly safe.

Saru Jayaraman, professor of public law at Brooklyn College, as well as co-founder and co-director of the Restaurant Opportunities Centers United, explores another downside of the restaurant industry in her new book, Behind the Kitchen Door: What Every Diner Should Know About the People Who Feed Us.

The research that Jayaraman presents in her book highlights some sad – as well as downright atrocious – facts about the mistreatment of many people employed in the food industry. She cites statistics compiled by the labor organization, AFL-CIO, which state that 90 percent of restaurant workers do not receive paid sick days, 7 of the 10 lowest-paying jobs in America are in the restaurant industry and only a tenth of a percent of these workers are represented by a union.

This means that for a restaurant worker who is paid minimum wage, coming down with the cold or flu often presents the choice between working while sick, or not having adequate money to pay their bills and supporting their families.

Indeed, Jayaraman’s survey of multiple people working in the food industry across major U.S. cities found that many of them face these decisions often, along with dealing with mistreatment by management.

One restaurant worker from Washington D.C. who Jayaraman quotes says, “customers always ask us if this dish is organic or local, thinking that is what will ensure they are having a healthy meal… but if they knew what workers were dealing with… working with the flu, tips and wages being stolen by the owner, getting screamed at and abused by managers, being called racial slurs, getting groped by male workers – they would think twice about the quality of their food.”

f someone is working in these extremely hostile conditions, which seem to be widespread in the industry, according to Jayaraman’s research, it is unreasonable to expect that they are going to be working to the peak of their potential. If someone has the flu or another illness, it can easily be spread to the customers through the food or utensils.

Additionally, if a worker is under extreme emotional and mental strain from abuse by management, they will likely – and understandably – not be paying full attention to what they are doing, increasing the chances of food contamination even further.

If more people knew about the conditions that restaurant workers are subjected to, they may think twice about being hostile to their servers, as well as about eating at that restaurant in the first place. Hopefully, the publication of Jayaraman’s book, and the attention that it is receiving, will serve to better the conditions for these employees.

In the meantime, the information presented by this book gives us just one more reason to prepare our own healthy meals at home.