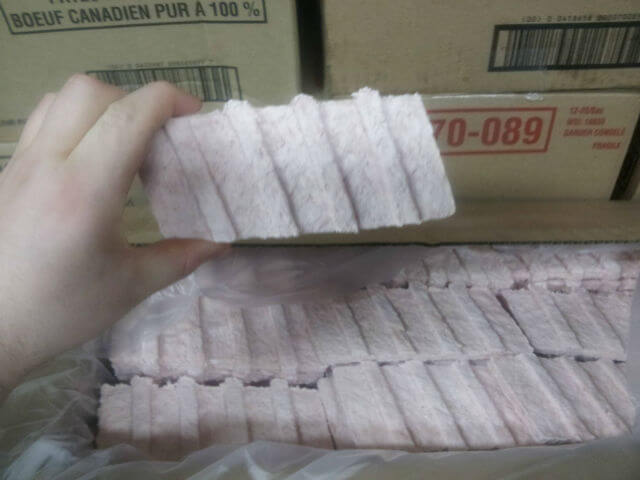 It is astounding that people actually get excited when they hear that McDonald’s restaurants are going to be featuring the infamous McRib Sandwich for a “limited time only,” once again. Introduced in 1981, just before the chicken McNugget, this so-called “boneless pork” product is more like a marriage of pig parts, including tripe, stomach and heart.

When a Reddit user circulated a photo of a McDonald’s frozen McRib, seen below, it went viral. The frozen patty certainly resembles styrofoam more than anything else, however, McDonals had this to say in defense:

“Just like a burger patty is formed to be round and flat, we form the iconic McRib in the shape of traditional ribs.We then flash freeze the patty to seal in flavor and freshness, just like you freeze meat in your own freezer, before going to our restaurants. The McRib is also known for its iconic taste, which is why we use a quality cut of pork -– pork shoulder -– to give our McRib lovers a thicker, meatier McRib experience.”

Fashioned in the same manner as the McNugget, by grinding a mish mash of ingredients together, the McRib parts are also bound together by a petrochemical preservative (Tertiary butylhydroquinone). The Consumer’s Dictionary of Food Additives states that as little as one gram of this dangerous chemical may cause an adverse reaction including “nausea, vomiting, ringing in the ears and sense of suffocation.”

A 2003 lawsuit accused McDonald’s of consumer deception and federal district court judge Robert W. Sweet referred to the Chicken McNugget as a “McFrankenstein creation.” However, children and adults all over America continue to be served the same McNugget that escapes justice, mostly due to the fact that it is served in a somewhat natural configuration – i.e. poultry can be cut into chunks, battered and fried, however, ribs, no matter how you prepare or cook them, cannot be eaten without the bones in them.

What is Really in The McRib?

The McRib is advertised to contain a pork patty, bun, barbecue sauce, pickle and onions. However it actually consists of 70 ingredients. The bun houses 34 of these ingredients along with additives such as ammonium sulfate (found in soil fertilizers), azodicarbonamide (a bleaching agent used to make gym mats and the soles of shoes), and partially hydrogenated soybean and cottonseed oils (most likely genetically modified).

The patty meat contains three preservatives including, propyl gallate (which has carcinogenic properties and can impact the stomach, skin, kidneys, respiratory system and liver – also banned in other countries), citric acid and butylated hydroxyanisole (may contribute to cancer and can lead to behavioral changes).

Although representatives from McDonald’s will tell us that the McRib is made mostly of shoulder meat, this is misleading. Tracing back to the birth of the sandwich gives us a whole different story.

The McRib was the creation of a meat scientist from Nebraska and a French trained chef. Roger Mandigo, a longtime professor at UNL, and an inductee into the Meat Industry Hall of Fame, is a well known innovator in restructured meat products. In a 1995 article Mandigo helped to describe the process that went into making the sandwich that is so loved today.

“Restructured meat products are commonly manufactured by using lower-valued meat trimmings reduced in size by comminution (flaking, chunking, grinding, chopping or slicing). The comminuted meat mixture is mixed with salt and water to extract salt-soluble proteins. These extracted proteins are critical to produce a “glue” which binds muscle pieces together. These muscle pieces may then be reformed to produce a “meat log” of specific form or shape. The log is then cut into steaks or chops which, when cooked, are similar in appearance and texture to their intact muscle counterparts.”

According to Mandigo, “Most people would be extremely unhappy if they were served heart or tongue on a plate,” he observed. “But flaked into a restructured product it loses its identity. Such products as tripe, heart, and scalded stomachs are high in protein, completely edible, wholesome, and nutritious, and most are already used in sausage without objection. Pork patties could be shaped into any form and marketed in restaurants or for airlines, solving a secondary problem of irregular portion size of cuts such as pork chops. In 1981, McDonald’s introduced a boneless pork sandwich of chunked and formed meat called the McRib, developed in part through check-off funds [micro-donations from pork producers] from the NPPC [National Pork Producers Council]. It was not as popular as the McNugget, introduced in 1983, would become, even though both products were composed of unmarketable parts of the animal (skin and dark meat in the McNugget). The McNugget, however, benefited from positive consumer associations with chicken, even though it had none of the “healthy” attributes people associated with poultry.”

The Hook-Line and Sinker of the Processed Food Industry

The secret society of food processors (not a real thing), speaks in code. Words that don’t make sense, ingredients that no one understands, special trade secrets and food that pulls Americans in – hook, line and sinker. What is it about processed food that makes people want more?

The Hook: For starters, processed foods contain none of the healthy nutrients found in real food but rather ingredients that rev up feel-good neurotransmitters that make us happy. Who doesn’t like to be happy? The problem is that this happiness comes at the cost of nutrition and our health.

The Sinker: Repeated consumption of processed foods leads to food addiction and a much greater susceptibility to sexy and alluring advertising campaigns.

Processed Foods are Loaded with Additives

Additives linked to obesity including MSG, high-fructose corn syrup, wheat and artificial sweeteners are found in abundance in processed/fast foods. These additives contribute to the dangerous condition known as insulin resistance, which is the driving force behind most diseases today.

While you are munching away on your McRib sandwich or slurping your Diet Coke, it is unlikely that you are thinking about the impact that these foods have on your digestive ecosystem. Out of sight, out of mind, right? Sadly, the damage that highly refined foods do to our digestive tract is immeasurable.

While the highly refined carbs in processed foods feed destructive bacteria, your healthy bacteria numbers diminish and the bad guys move in destroying the lining of your gut, promoting inflammation and turning your internal balance upside down. While signs of this battle may not be evident immediately, the damage is cumulative, sometimes showing up ten or more years down the road.

Memory problems, mood swings and even depression can be linked to processed and fast foods. The greatest amount of serotonin (which is responsible for mood control), is found in your intestines, not your brain. The gut/brain connection is very strong and what we eat influences the nature of this relationship. Food is the driving force and when our intestines are off kilter, our mood, behavior and overall psychological health suffer.

Processed foods are easy, convenient and make a few people in our country a ton of money. However, they offer nothing for your health or the health of your family. Not only should you walk away from processed foods such as those served at McDonald’s, you should run. This includes the 90% of processed foods that line your grocer’s shelves. Stick to real, wholesome food, of which there is plenty to choose from.

Know what you are eating and where it came from. Be safe!