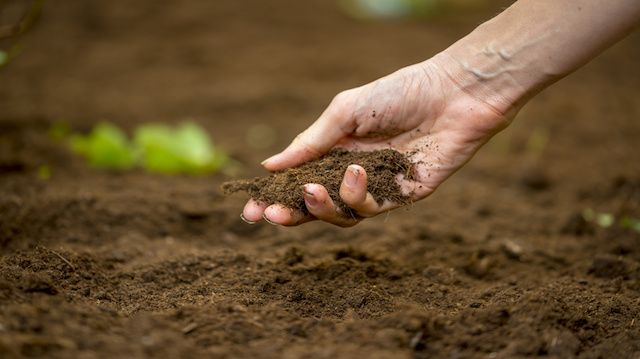 If you feel better after doing some gardening or just generally playing in the dirt, you may have soil-dwelling bacteria to thank. It’s not that working with your hands or getting close to nature isn’t inherently calming, but a specific type of bacteria has been shown to lower anxiety and improve emotional well-being. Think of it as a natural antidepressant.

Mycobacterium vaccae, a type of bacteria found in soil, helps release serotonin when it comes in contact with the body. Serotonin is a neurotransmitter manufactured in the brain but found primarily in the digestive tract. While serotonin performs many functions within the body, an imbalance of this chemical may result in depression, anxiety and obsessive-compulsive disorder. The class of antidepressants known as SSRIs (selective serotonin reuptake inhibitors) work by changing the balance of serotonin in the brain. Well-known SSRIs include the following:

If you eat plants and herbs grown in your garden, there’s a good chance you’ll consume some M. vaccae no matter how well you wash your greens. That’s especially true of any uncooked veggies, such as your salad ingredients or root vegetables eaten raw, like carrots. It’s possible that you don’t need to touch — let alone ingest — M. vaccae to put yourself in a better mood. Just getting a smell of it while out in the backyard or on a walk might lift your spirits.

Numerous studies in mice with M. vaccae show a connection between the bacterium and well-being. In one study, mice given the bacterium before a maze task showed fewer signs of anxiety during the trials. They completed the maze more quickly than mice who did not receive M. vaccae. The original trials lasted three weeks. Final trials without the bacterium showed that mice received the benefit of M. vaccae for roughly a week after its last administration. Other studies reveal increased serotonin levels in mice given M. vaccae.

Cancer patients treated with M. vaccae at The Royal Marsden Hospital in London

saw improvements in their emotional well-being, along with cognitive function. Although overall survival time was not affected, there was improvement in quality of life.

Go play in the dirt

It’s possible that working with soil and playing in the dirt could aid children’s learning abilities. This is a good reason for parents to create gardens with their kids and make sure they spend more of their free time outside and not online. It’s also a good argument for schools to include exposure to nature and working in the soil as part of recess and science activities. Benefits aren’t only intellectual — children who grow up on farms and spend a lot of time outdoors and in the company of animals are far less likely to develop allergies and asthma in childhood than urban or suburban youngsters. That’s according to a study published in the February 24, 2011 edition of The New England Journal of Medicine.

The study involved approximately 9,600 elementary school children between six and 12 years old living in Germany, Austria and Switzerland. “Children growing up on farms in Central Europe were protected from asthma and atopy, or allergies. These children were exposed to a greater variety of environmental fungi and bacteria as compared with children in the reference group who lived in the same regions,” according to the study. While the researchers could not identify the particular microbes that offered allergy and asthma protection, they could identify “broad families of species within microbial taxa” that were possibly responsible.

Get back to nature

The evidence that exposure to natural microorganisms in the soil is inherently beneficial is quite strong. Which comes first: Does the desire to go out and garden enhance your mood, or does contact with soil lift your spirits? It’s probably a combination of both. Getting back to nature in all of its forms relieves stress and allows us to decompress. The bottom line is that dirt is good for you.