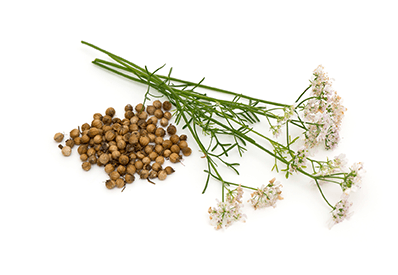 Believed by the Chinese to bestow immortality, coriander, or “Coriandrum Sativum,” is a powerful herb with many health benefits… earning it the name, “The Wonder Herb.”

Hippocrates, the famous ancient Greek healer who became known as the “Father of Medicine,” was said to have used and regularly recommended coriander for a wide range of conditions.

Discovered by archeologists in Egyptian pharaoh Tutankhamen’s tomb, coriander (also known as cilantro or Chinese parsley) has been traced back to 5,000 BC. The use of this herb has a long-history across the Mediterranean, Middle East and Asia spanning thousands of years… and playing a major part in ancient medicine.

Known to cure “small pox,” and with medicinal properties documented in Sanskrit and Greek writings, coriander seeds have an impressive health-supporting reputation matched by very few, even today…

Coriander is rich in vital nutrients

As a “gateway to health,” coriander has potent liver supporting properties, and is an excellent source of phytonutrients and flavonoids. It is an also a phenomenal source of minerals, including potassium, calcium,manganese, iron, and magnesium, as well as folic acid, riboflavin, niacin, beta carotene, and a generous dose of vitamins C, A and K — all essential for optimal health.

Vitamin D, no doubt should be a vital part of your daily regiment. However, relying on it alone to do its job can be a BIG MISTAKE, and here’s

Because vitamin-D is “fat soluble,” it needs healthy fats to be effective. Coriander seeds are loaded with fatty acids and essential oils. In fact, they contain 28.4% of seed weight – in total lipids!

There is ample evidence to suggest that vitamins A and K are necessary for proper assimilation of vitamin D. One serving of coriander contains roughly 400% the RDV of vitamin-K and ample amounts of vitamin A.

Pathogens in the body put stress on the immune system and can affect vitamin D levels. The presence of antioxidants, rich phytonutrients, minerals, and vitamins in coriander all work synergistically to boost the body’s overall immunity.

Common toxic metals like mercury, lead, aluminum and cadmium impair your body’s ability to produce sufficient vitamin D. Coriander oil has shown to be one of the most potent natural chelatorsof toxic metals known and to aid removal of mercury, cadmium, aluminum and lead from the body!

Getting “natural vitamin D” from the sun is surely the best way, yet poses great skin cancer risks if you are antioxidant and/or omega 3 deficient! And actually, omega-3 fat deficiencies are a far more significant risk factor for deadly skin cancers than sun exposure!

Coriander oil provides you with a great source of antioxidants! For omega 3 boosting power, coriander oil has been shown to increase the natural bioconversion of alpha-linoleic acid to EPA and DHA in animal studies.

In 2009, type 2 diabetes affected 285 million worldwide. Today, in 2014, it affects 365 million people worldwide! Due the stimulating effect of Coriander oil on the endocrine glands, the secretion of insulin is increased from the pancreas, increasing the insulin levels in the blood. This regulates the proper assimilation and absorption of sugar and results in healthier blood sugar levels.

Metals are the #1 known contributor to chronic diseases – such as Crohn’s disease, fibromyalgia, multiple sclerosis and Alzheimer’s. Coriander has shown to be a potent mobiliser of mercury, cadmium, lead and aluminum from the bones and central nervous system.

It is also the only known substance to get “inside entry” to the cell – dislodging toxic metals attached to cell organelles, from within the nucleus of the cell – and actually reversing the DNA damage that has been caused! It is best taken 30 minutes prior to eating food containing fiber or a clean source of chlorella.

Coriander oil helps with the secretion of enzymes and digestive juices in the stomach, thus stimulating peristaltic motion, and overall digestion. And also because of its antioxidant, antifungal, and “antibiotic” effects, coriander oil has shown to help increase absorption in the stomach.

Because of its powerful anti-fungal properties, coriander has been proven to be effective at killing Candida Albicansovergrowth and any accompanying digestive invaders. This promotes the proliferation of healthy gut bacteria and improves immune system function.

A study in rats demonstrated that corianders’ combination of linoleic acid, oleic acid, palmitic acid, stearic acid and ascorbic acid (vitamin-C) are effective in also reducing cholesterol deposits along the inner walls of the arteries and veins.

Coriander oil consumption has been shown to reduce blood pressure in patients suffering from hypertension.

Coriander contains coriandrol, a substance used to treat liver cancer. When combined with a healthy diet, Coriander is believed to be effective in preventing certain cancers such as liver, breast and colon cancer.

Research, recently published, showed that Coriander Oil has the ability to kill serious bacteria such as E. coli, MRSA, salmonella and Bacillus cereus. Out of 12 tested strains, every bacteria strain showed reduced growth, and most were killed! And these were by solutions only containing 1.6% coriander oil!

Coriander oil works by damaging the membrane of the bacterial cell, causing cell death — according to the Journal of Medical Microbiology study. Back in 2004, a study published in the Journal of Agriculture and Food Chemistry showed the compound dodecenal (found in Coriander) was twice as effective as the commonly used antibiotic drug, gentamicin, at killing salmonella!

It’s actually been know for a long time that “salsa” has antibacterial properties… only no one realized it was the Coriander in the salsa that was responsible for this.

All-in-all, you’re SURE to experience some sort of “food borne illness” more than a few times in your lifetime… with Coriander oil at your side, you’ll be prepared!

Especially since this new Coriander oil (mentioned below) does NOT require refrigeration, you can easily “take it with you” on the go, whether home or traveling.

After years of research and trial & error – for the first time in the world – Activation Products is now exclusively manufacturing “The Only 100% Organic, Pure-Pressed Coriander Oil” of it’s kind!

With the “highest usable potency” ever produced, even Hippocrates would have drooled to get his hands on this super-charged oil! “Plop a few drops” into your daily regimen and feel your body flourish! 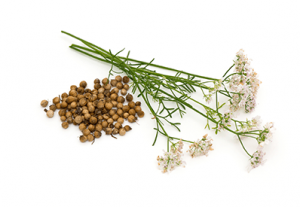 Where to get 100% Pure Coriander Oil

First, it must be truly pure Coriander oil. You also only want to purchase organic, pure-pressed oil that is completely free of all additives – and should be stored in a light-protective and air-sealed Miron bottle.

Currently, Activation Products is the only supplier of pure coriander oil that is matched to these standards.

Activation Products has developed a proprietary extraction technology. This technology is so delicate yet powerful that the precious nutrient qualities of the seeds are left undamaged.

The result is high quality oil that needs no refrigeration and will last for up to a year in the kitchen cupboard.

The amazing health effects listed above are what inspired the team at Activation to produce pure coriander oil.

…This product is BRAND NEW, and inventory is relatively low, so ACT FAST!