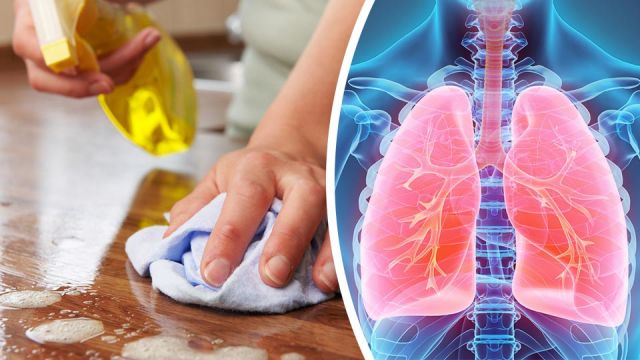 Whether you love housework or hate it, there’s something you need to know: Housework may be bad for your health. But it’s not the actual physical labor that’ll cause you grief. It’s the products you’re using to clean your home. Now more than ever — especially if you’re a woman — it’s imperative you find alternative, healthier solutions for your household chores. Your lungs depend on it!

Ladies: be careful of what you breathe in

It seems that regular exposure to cleaning products, whether in the home or at work, has a major impact on women’s lungs. Research published in the American Thoracic Society’s American Journal of Respiratory and Critical Care Medicine found that chemicals, including ammonia, on mucous membranes lining airway became significantly irritated when breathed in. Additionally, the study found that there is an increased risk of asthma and respiratory symptoms among professional cleaners and woman in general who clean their homes.

Long-term chemical impact on woman… but not men

In fact, the study suggests that using chemically-laden products with ammonia causes long-term respiratory health problems ten to 20 years down the road. And the decline in lung function was equivalent to someone who smokes tobacco regularly for one year. Researchers from the University of Bergen in Norway analyzed data from 6,235 participants with an average age of 34 years. They were then followed for over 20 years.

The short-term effects of cleaning chemicals on asthma are pretty well documented. But according to senior study author Dr. Cecile Svanes, a professor at the university’s Center for International Health, “we lack knowledge of the long-term impact.” Further, “we feared that such chemicals, by steadily causing a little damage to the airways day after day, year after year, might accelerate the rate of lung function decline that occurs with age,” said Svanes.

When comparing women who didn’t clean professionally to those who did, researchers found that women working as cleaners had lung damage that was comparable to 20 cigarettes smoked daily for one year. But interestingly, there was no noticeable difference found between men who cleaned and those who did not, says the study. Another good reason why the man in your life should clean instead of you (wink).

“The take-home message,” according to Svanes, is that “long run cleaning chemicals very likely cause rather substantial damage to your lungs. These chemicals are usually unnecessary; microfiber cloths and water are more than enough for most purposes.”

Meanwhile, there are healthier alternatives for keeping your home sparkling clean without using harsh and potentially dangerous chemicals.

In fact, as bacteria develop a tolerance for cleaning agents, there’s a potential for also developing a tolerance for certain antibiotics. This is called cross-resistance. And it has already been demonstrated in several lab studies using triclosan. Triclosan is one of the most common chemicals found in antibacterial dishwashing liquids, hand-cleaners and other wash products.

Why not use non-toxic homemade cleaning products, instead? They’re healthier for you and your family, less expensive and environmentally friendly.

Baking soda cleans, deodorizes and cuts through grease. Here are some ways to use it:

Vinegar, used alone, is safe and effective on counters, floors and windows. Here are some ways to put it to use in your home:

Natural disinfectants may require some creativity and a little elbow grease, but the payoff is worth it. Your lungs with thank you!