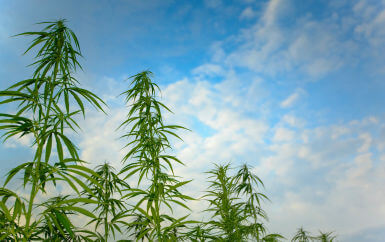 “Make the most of hemp seed, grow it everywhere” – George Washington, 1794

Hemp was used as legal tender in the United States for 200 years – you could even pay your taxes with hemp. George Washington himself grew more hemp than anyone on earth in the 1700’s, and Thomas Jefferson was noted as telling farmers to choose hemp over tobacco.

The American government once jailed farmers who refused to grow it – now they jail those that do. In the mid-1930s, Popular Science magazine called hemp America’s “New Billion Dollar Crop.” With the steel, oil and timber companies holding most of the economic power in the nation, they came up with an effective plan to demonize hemp through effective propaganda and misinformation. They insisted that hemp was nothing but marijuana, and its use was just a dangerous way to get “high.”

Under pressure from these industries, the government passed the Marijuana Tax Act of 1937, which imposed a prohibitive tax on all hemp products, destroying the industry and denying Americans one of the most beneficial crops on earth.

How Did it Happen?

In the late 1800’s, production of hemp fibers slowed due to lack of technology, the cheaper methods of growing cotton and the growing popularity of stripping trees. From 1901 to 1937 the United States Department of Agriculture, who knew the value of hemp, promised farmers that as soon as the technology to harvest, strip and separate fibers was created, hemp would once again be America’s number one selling crop. However, some others had a different plan for hemp and were set to put it in motion.

Hemp, the most versatile crop on earth, competed with paper and cotton. Lammont DuPont and William Hearst were very powerful and wealthy men with an agenda. DuPont, head of the richest chemical manufacturing company, and Hearst, owner of the largest newspaper in the country. Together, they took hemp and all of its natural goodness down to protect their own financial investments.

Hearst not only owned nationwide newspapers, but the timber used to make them, and DuPont patented the process for making synthetic nylon from oil and coal and also an improved sulfate process that made paper from wood pulp. The environmentally friendly hemp fiber could destroy his business.

Because Hearst owned the media, he could print whatever he wanted in his papers, so he devised a smear campaign. Terrible and completely untrue headlines shocked America and painted a picture of hemp that made people frozen in fear. In fact, Hearst made one of the first references to the cannabis plant as a drug and told the public that it was a tool used by “Negroes, Hispanics and entertainers.”

Hearst went on to say that this tool could cause a black man to rape a white woman and kill her and her whole family without thinking twice. Another headline stated that a gunman smoked marijuana and that made him crazy. Additionally, Hearst painted a picture of Mexicans who had immigrated to America as being lazy and sitting around smoking pot all day.

DuPont used his connection with Andrew Mellon, who was Secretary of the Treasury under Herbert Hoover, and Henry Anslinger, head of the Federal Bureau of Narcotics, to push the Marijuana Tax Act of 1937. When industrial hemp farmers questioned the law, Anslinger declared that farmers could continue to raise hemp as usual because it makes very fine cordage and the legislation would differentiate between marijuana and the mature plant stalk grown for industrial purposes. However, despite this claim, the entire Cannabis family, including hemp, was made illegal due to its similarity in appearance.

During World War ll, after Japan cut the supply of raw fibers, the United States Department of Agriculture encouraged hemp to be grown as a war effort. However, once the war ended, hemp was once again illegal.

The law against hemp continued until 1968 when the Supreme court agreed that it was unconstitutional. From 1970-1972, American tax dollars supported an investigation into the hemp laws. Experts reported back to Nixon that hemp was a non-addictive substance, not a stepping stone to harder drugs, and that it did not even belong in the drug category. They said that there was absolutely nothing evil or dangerous about hemp. Nixon publicly opposed hemp because he felt it had no medicinal value.

During the time of the American investigations, Holland was doing its own research on the hemp plant. Interestingly enough, experts from Holland supported the use of the plant and Holland listened and made it legal.

In 1988, more than 2 million tax dollars were given to the United States army to study hemp. Their findings supported the notion that it should not be illegal. However, the Reagan-Bush administration seemed to be hoping for news that the plant was, in fact, bad. They ended up dismissing the study and keeping the data to themselves.

Food for thought: Legalizing hemp would seriously threaten the following:

A Note on Botanical Differentiation

Industrial hemp and what is called marijuana are varieties of the same Cannabis Sativa L. plant. However, they are incredibly different. The THC levels in industrial hemp are so low that if someone tried to smoke it, nothing would happen. In reality, hemp contains another compound that actually blocks THC, therefore, it could actually be called anti-marijuana.

The government states that hemp fields could be used to hide marijuana plants; however, the two plants are grown completely differently. In many countries, industrial hemp is legal while marijuana is illegal, and law enforcement officials have no trouble with regulation.

What is Happening in Other Places?

So, What’s So Special About Hemp?

Hemp is environmentally friendly. It’s a hardy plant that requires little water and no synthetic fertilizers or herbicides. It boosts soil health, and in relatively warm climates it can be planted and harvested twice a year.

Hemp offers the opportunity to live in harmony with the environment and our ecosystems instead of fighting against them. It even has the potential to replace major renewable raw materials.

When produced correctly, hemp plastics are 100 percent biodegradable and could potentially replace all petroleum based plastics that are filled with harmful chemicals.

Instead of cutting down trees for wood to produce paper using toxic chemicals, which results in numerous ecological problems, hemp fibers can be used for paper. The fibers are stronger, and more versatile, than any other plant derived fiber, including cotton and wood. Deforestation is occurring at around 3 percent each year; hemp is a much superior resource as it can be grown to maturity in just a little over three months.

Hemp biomass fuel does not produce sulphur. It can be used as a relatively clean power source with its 95 percent fuel to feed ratio.

Despite its amazing attributes, hemp remains illegal in this great country of ours. As awareness continues to grow, more and more activists are stepping out to challenge the current legislation. For the time being, America imports massive amounts of hemp products from other countries. Wouldn’t it be nice to grow this incredible plant and have a role in creating a healthier, happier world now and for future generations? We think that George Washington would second that!