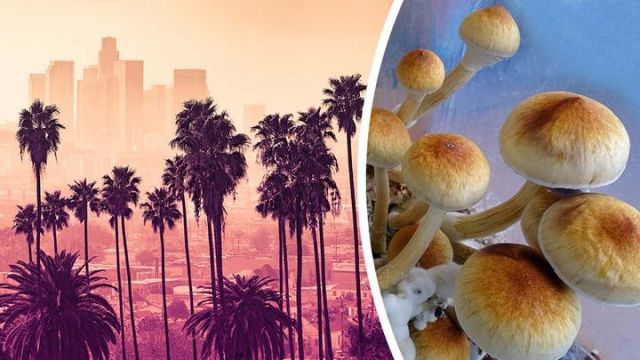 You’ve probably heard the term political junkie before, but I bet you’ve never heard a candidate running for office who recommends legalizing a hallucinogen like magic mushrooms.

Actually, the idea may not be as far out as it sounds. There are some credible studies showing that psilocybin (the active ingredient in magic mushrooms) can alleviate anxiety and depression, reduce obsessive-compulsive behaviors, and even stimulate the growth of new neurons in the brain (perhaps this is what some of our elected representatives could use more of).

In addition, there are also some highly-regarded scientists who believe magic mushrooms represent a portal which can be used to explore the collective unconscious, the universal mind and other dimensions of reality (where psychedelic explorers can supposedly encounter alien beings).

Kevin Saunders, who is running for mayor of Marina in California, sees a more down-to-earth reason for magic mushrooms. More specifically, he wants to see them legalized to help voters better cope with the stresses that attend the current political climate.

As he explains, “The world is really hurting and everybody is at a loss about what’s going on right now with Trump, Brexit, the refugee crisis and everything else. I’m at a loss at what to do politically, but the only thing I feel like we could do is get psilocybin into more people’s hands. It could allow people to figure out what to do and could revolutionize the way we treat those with depression, addiction and cluster headaches.”

Saunders needs to collect at least 365,000 citizen signatures by April 2018 so he can get the issue on the ballot in time for the next election. There’s no word on his progress on that score, but Saunders wants people to know that psilocybin — the active compound in magic mushrooms — helped him overcome a destructive heroin habit. The mayoral hopeful insists he’s been clean for 15 years.

The benefits of psilocybin

In fact, many addiction experts believe that psilocybin, which tends not to be addictive or habit-forming, can help provide addicts with insight into their destructive behaviors. A number of studies have found, for example, that magic mushrooms are efficacious in getting alcoholics to stop drinking and smokers to quit cigarettes.

For instance, according to Dr. Michael P. Bogenschutz, professor and vice chair for Addiction Psychiatry and Clinical Research at the University of New Mexico, “The stronger the person’s subjective response to psilocybin and the more they reported dimensions of mystical quality to the experience, the greater their clinical improvement in terms of both their drinking and their psychological status.”

Most observers agree that Saunders’s cause is probably a longshot. But his campaign is at least sparking debate and getting people to ask questions like, “Could magic mushrooms help improve the political climate?”

In my view, it will probably take more than hallucinogens to get Democrats and Republicans to share the love again. But given how much of a bummer things are now, it could just be worth a try.