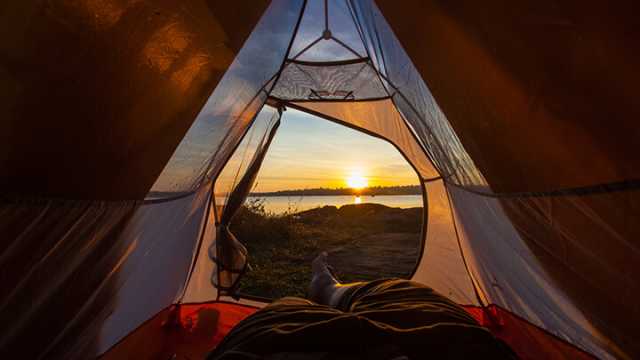 Have you had trouble sleeping lately? If so, you’re far from alone. Around 30 percent of the global population have trouble getting to sleep or staying asleep. However, a new study may have just shed light on an unlikely solution: camping.

Published in the journal Current Biology, the study found the great outdoors could be the perfect solution to anyone who has struggled to get to sleep. The study was conducted by researchers from the University of Colorado. They sent participants out into the Rocky Mountains for a week of camping.

Aged 21 to 31, the participants quickly changed their sleep patterns over the course of just six days. On average, the happy campers clocked up two and a half hours of additional sleep each night, mostly by hitting the hay earlier than usual. However, this didn’t mean they were less productive. Even while sleeping longer, the participants showed elevated signs of activity during daylight hours, meaning they packed more into their days while being better rested at night.

Why did this happen?

“[Melatonin] would go down at sunrise and right when people woke up,” Wright told NPR. However, this wasn’t the only surprise. Wright explained that even after the camping trip, participants continued to go to sleep at least two hours earlier.

These changes may have been caused by a reset of participants’ circadian clocks — the internal rhythm that tells our bodies when to sleep and when to wake. As Wright explained, “How our circadian clock responds to the natural light-dark cycle is part of our fundamental physiology.”

Researchers have long speculated artificial lights disrupt our natural sleep cycle. The basic idea is that our bodies have evolved to respond to light and darkness in very specific ways. Light makes us want to be awake, while darkness prompts sleep.“Our modern environment has really changed the timing of our internal clocks, but also the timing of when we sleep relative to our clock,” Wright said.

So while artificial light disrupts our natural sleep pattern, nature can put things back in order. Or as Wright put it, “A weekend camping trip can reset the clock rapidly.”

Such a simple solution to sleep problems could potentially help tens of millions of people. In the U.S. alone, somewhere between 50 and 70 million people have experienced some kind of sleep disorder. Around 40 million of these people likely suffer some kind of long-term, chronic sleep problem. None of this is surprising, given that so many of us struggle to get enough sleep.

Things look even worse when we look at those on the most sleep-deprived end of the spectrum. In 1942, just three percent of the population got less than five hours of sleep. By 2013, that number had risen to 14 percent. In short, we’re sleeping less than we have in decades — and it’s taking a toll.

If you’re one of those who struggle to get enough sleep, don’t get too excited yet. The camping experiment may not be a perfect solution. Plus, it only dealt with a relatively small sample size, the University of Surrey’s Derk-Jan Dijk told The Guardian newspaper. More research is needed to determine whether light was the only factor at play, or if other variables like temperature might have affected the participants’ melatonin levels.

Nonetheless, Dijk noted the study might help prompt renewed discussion over the role of artificial light in our daily lives. It may provide hope to people who may have otherwise given up on trying to get a decent sleep. “There are some people who say ‘I can’t go to sleep early because I’m a late type, it’s in my genes.’ But it’s exposure to artificial light that drives our clock later so we struggle to get out of bed in the morning,” he said.

Of course, not everyone is the camping type. Luckily, if spending a few nights in a tent isn’t your thing, Wright has some good news. “We know that we don’t have to go camping to achieve these benefits,” he told The Guardian.

Wright suggested we should aim to get more natural light during the day and less artificial light at night. Morning walks could help some people boost their activity during the day. If you’re stuck inside, try sitting by a window to stay more alert. Then at night, take the opposite approach.

There you have it! Do you have any solutions for sleeping trouble?