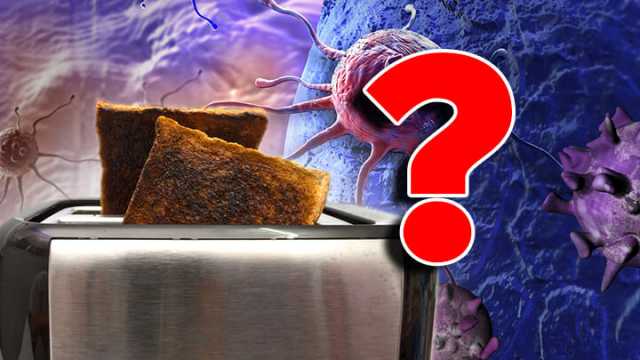 Many people realize that burning certain foods — particularly fried or smoked — can lead to the formation of compounds linked to cancer. But what about toasting? The United Kingdom’s Food Standards Agency has recently warned people to stop eating burnt toast and other foods with acrylamide to reduce the risk of developing cancer.

Did you know that starchy food, such as bread and potatoes, can produce a dangerous chemical? Burnt toast is linked to the possible carcinogen acrylamide, which is linked to an increased risk of cancer and nerve damage in animals. The warning comes from the United Kingdom’s Food Standards Agency (FSA,) which recently launched a campaign called “Go for Gold.”

“Go for Gold” aims to reduce the amount of acrylamide that people consume from starchy foods like bread or potatoes that are often cooked for long periods at high temperatures. Toasting along with baking, frying, grilling and roasting has the potential to produce acrylamide, suggests the FSA. The FSA suggests that instead of reaching a dark brown color when toasting, baking, frying, grilling or roasting starchy foods, aim instead for a golden yellow or lighter color.

The campaign is based on previous animal studies published by the World Health Organization (WHO) after Swedish scientists found the cancerous compound in certain foods. But the link has not yet been proven in human subjects. However, according to the American Cancer Society, acrylamide is also found in cigarette smoke. It is probably one of the main ways smokers are exposed to the carcinogenic compound.

Risk of acrylamide in food

In 2015, the journal European Food Safety Authority (EFSA) published a study on the health risks of acrylamide in food. Science experts from EFSA’s Panel on Contaminants in the Food Chain reconfirmed what was previously known. They found that acrylamide in food potentially increases the risk of developing cancer for people of all age groups. But children — due to their body weight — are exposed the most.

In animal studies, acrylamide and its metabolite glycidamide are genotoxic and carcinogenic. Meaning, it damages DNA and causes cancer. But any evidence suggesting that acrylamide in food causes cancer in humans is limited and inconclusive, suggests the EFSA. Nonetheless, the recent FSA campaign noted that even brown toast posed an increased risk of cancer, and advises that bread should only be toasted until golden.

Everyday high-temperature cooking causes the Maillard reaction, including frying, baking, roasting and industrial processing with low moisture. The Maillard reaction occurs as foods brown, affecting the taste. The acrylamide forms from sugars and amino acids that are naturally present in many foods. Once ingested, acrylamide is absorbed from the gastrointestinal tract and distributed to all organs where it is extensively metabolized.

Glycidamide, a main metabolite that results from this process is the most likely cause of the gene mutations and tumors seen in animal studies. Foods that contribute to acrylamide exposure include:

How to avoid too much acrylamide in your diet

The storage method and the temperature at which food is cooked can also influence the amount of acrylamide consumed. The FSA tells consumers to check the packaging for cooking instructions. While levels of acrylamide can vary depending on manufacturers’ baking instructions, generally packaged foods like French fries have instructions intended to cook fried or oven-baked foods correctly. This ensures that you won’t overcook starchy foods for too long or at temperatures that are too high.

The National Cancer Institute suggests decreasing cooking time, blanching potatoes before frying, and even drying them in a hot air oven after frying. These methods have been shown to decrease the acrylamide content of some foods.

Don’t store raw potatoes in the fridge, if you plan on roasting or frying them. Storing raw potatoes is shown to increase overall acrylamide levels. Raw potatoes should ideally be stored in a cool, dark space.

Acrylamide in the workplace is risky too

Beyond food, there have been other reported health risks of acrylamide. An early study showed high levels of acrylamide in the workplace. And it’s been known to cause neurological damage among workers using acrylamide polymers to clarify water in coal preparation plants.

In 1992, two people in different coal preparation plants were referred to Marshall University School of Medicine in Huntington, West Virginia for evaluation. Both workers had been exposed to acrylamide polymer contaminated with acrylamide monomer for over 10 years. Additionally, both workers had no instruction on proper usage or given adequate safety equipment. One worker developed Parkinsonism and the other peripheral neuropathies with a neurogenic bladder.

Although research on carcinogens linked to burning foods is not new, the goal of the FSA is to shed another light on the subject and increase awareness about the potential risks. “Our research indicates that the majority of people are not aware that acrylamide exists,” said Steve Wearne, director of policy at the Food Standards Agency in a statement. You can’t completely avoid acrylamide in food, but you can reduce the risk. Eat a healthy, balanced diet. And of course, don’t burn your toast!