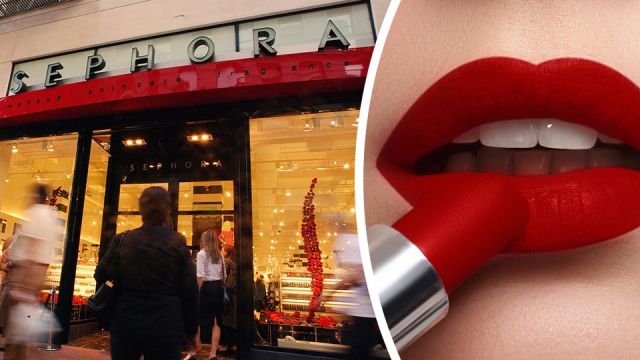 A Los Angeles woman is suing a cosmetics store for failing to warn customers that trying on lipstick could give you herpes. Which begs the question: can you actually get herpes from cosmetic counter lipstick?

Here’s the story so far

According to court documents obtained by NBC4 News, the unnamed woman said she contracted oral herpes after testing out some lipstick in a Sephora store in late 2015. She alleged to have never experienced a cold sore before visiting the store, but was diagnosed with herpes shortly after her Sephora visit. According to NBC4, the woman is suing for emotional distress, and alleging the store “failed to clearly warn customers about the risk of getting oral herpes from trying on lipstick.”

The unnamed plaintiff is also calling on Sephora to reform how they allow customers to sample cosmetics, such as by possibly providing individual samples. For their part, Sephora has responded with a short statement that said, “The health and safety of our clients is our foremost priority.”

“We take product hygiene very seriously and we are dedicated to following best practices in our stores,” the company said.

So is herpes a risk when trying on lipstick, and should Sephora have warned its clients?

Here’s some bad news: plenty of medical professionals agree it’s possible to contract herpes from trying on in-store lipstick. Dr. Angela Lamb, director of the Westside Mount Sinai Dermatology Faculty Practice, told The Huffington Post you “absolutely can” get herpes this way, and urged consumers to “avoid those lipsticks.” In theory, all you need is for an infected person to try on the lipstick, and for you to give that same stick a whirl a few minutes later.

“Passing the troublesome herpes virus around it is not as difficult as we would like,” explained Dr. Cynthia Bailey from Dr. Bailey Skin Care. “Most people who have a history of a herpes cold sore on their facial skin harbor the virus around the mouth or nose, making lip products the most likely makeup for transferring herpes,” she said.

However, Bailey also noted other cosmetic products could likewise transmit herpes, as the “virus can be present anywhere on the face.”

Moreover, it’s not just herpes that can hide in cosmetic testers. A 2005 study of public cosmetic testers found E. coli, strep and staph on makeup samples, according to The Los Angeles Times.

In other words, cosmetic store testers are gross, and it seems they can totally give you herpes.

It’s possible, but is it likely?

But wait, because the story is a little more complicated than that. For one, there’s a big difference between “possible” and “likely.” Tim Warren from the American Sexual Health Association has argued that while a lipstick tester could carry herpes, he said the time window for transmission is pretty limited. That’s because herpes can’t survive for long on most surfaces — only a few hours, depending on things like humidity and room temperature. Because of this, Warren said, “there’s a whole lot of obstacles for a case like this in medical plausibility.”

“It’s not impossible, but it’s extremely unlikely,” he said.

Warren further argued that it’s almost impossible to know if the woman actually contracted herpes from the lipstick, and not somewhere else. “Just because she got her first cold sore at that time doesn’t mean it’s her first infection,” Warren said. In reality, the woman could have been unknowingly carrying the virus for years, or even decades without noticeable symptoms.

Infectious disease specialist Dr. Amesh Adalja seemed to agree. Speaking to Live Science, Adalja said lipstick is an uncommon way to contract herpes, and said there’s plenty of other explanations for how the woman may have been exposed. “I would suspect that many people who think they get herpes from certain things were already positive [for the virus], because it’s such a common and unavoidable infection,” he said.

This brings us to the most important point of all: you’re unlikely to get oral herpes from lipstick because of the simple fact that you probably already have it. Just under 70 percent of people under the age of 50 have the most common type of herpes, HSV-1, according to the World Health Organization. Many people who carry the virus experience almost no serious symptoms, and Adalja said the common virus “isn’t something people should be distressed about.”

He said it’s so hard to avoid that it’s “basically part of the human condition.”

So if you don’t get herpes from lipstick, you’ll probably get it somewhere else. Either way, it doesn’t really matter.