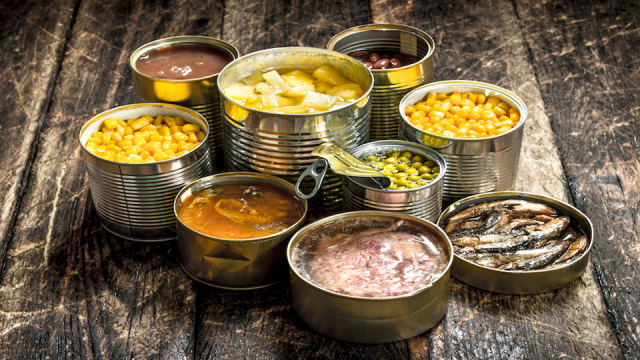 Do you regularly consume canned food? While it is convenient and often cheap, canned food has its fair share of downsides which consumers should be aware of. These downsides are severe enough that we should consider the issue of saving a little over risking a lot.

Eating canned food has become a habit for many people, living in our busy, busy culture. It’s so much easier to just pick up a can of this and a can of that rather than washing, cutting, and preparing fresh food.

According to the Global Food Processing Network,

“The United States leads in world consumption of canned and preserved foods, accounting for 20% of the total consumed in 2014, which was valued at USD 19.5 billion”

While you are preparing for this holiday season’s feasting, keep in mind that fresh is always best, here’s why:

Canned products are loaded with preservatives

Manufactured canned products are often doused with refined sugar, refined salt, and preservatives. These additives can negate much of the original nutrition of the food. One class of preservatives often used in canning vegetables is sulfites. These include sulfur dioxide, sodium sulfite, and potassium bisulfite.

Some people may experience reactions to sulfites, which may be severe. If you find yourself having breathing problems within about half an hour after eating canned foods, seek immediate medical attention.

Many cans are lined with bisphenol-A (BPA), despite the growing knowledge of this industrial chemical’s toxic effects over recent years. BPA exposure is linked to hormonal disruption and may pave the way for infertility, breast cancer, and prostate cancer. It is also linked to obesity, heart disease, diabetes and neurological complications, such as ADHD in children

The Environmental Working Group (EWG) analyzed 252 canned food brands to find which ones used an epoxy-containing BPA. Here is the list:

Food manufacturers and packaging companies such as the Can Manufacturers Institute and the North American Metal Packaging Alliance are on the “BPA is safe” team, stating that “the extremely low levels of BPA found in canned foods do not present a health risk to children or adults.” It must be pointed out though, that a change in the safety regulations would force billions of dollars of revamping costs on these companies.

What about BPA-free products?

If you see a label that claims a product or container is BPA-free, this does not necessarily mean it is safe. Some manufacturers have been substituting it with other chemical compounds, such as bisphenol-S (BPS), which has been found to be very similar in structure and may lead to many of the same dangers. Some cans used for home canning may also contain either BPA or BPS.

Improperly canned food can cause sickness and death

When food is improperly canned, it can lead to the growth of Clostridium botulinum bacteria, which leads to botulism, a form of food poisoning that can cause paralysis and even death if not quickly dealt with. Home canners are especially at risk of this bacteria if they do not follow canning procedures stringently. Never eat from a can that is dented, leaking, rusted or bulging. If the food inside smells off, toss it out.

Finally: This one is obvious, canned foods taste… canned. A canned product can never match the flavor of its fresh counterpart.