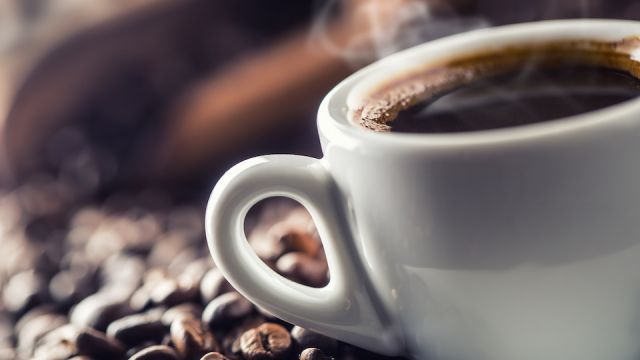 We are a coffee guzzling country, and our drinking habits are on the rise. According to the National Coffee Association, over 64% of Americans enjoy at least one cup of coffee daily. But, has your doctor urged you to cut down on caffeine? How much do you really know about that decaf cup of Jo you enjoy each day? Perhaps not enough to know that you may be drinking some hazardous chemicals right along with your favorite cup of coffee.

A recent investigation by The Clean Label Project revealed that there is cause for concern. Truth: A dangerous chemical recently banned from paint strippers is being used in the decaffeination process in many well-known coffee brands. Perhaps even the one that you are enjoying right now.

What you need to know about the decaffeination process

All coffee beans naturally contain caffeine. In order to make coffee that does not, the caffeine must be removed from each and every bean. It is impossible to remove all caffeine; therefore, no coffee is truly 100% caffeine-free. The method used to remove the caffeine from beans varies, and there is currently no requirement for coffee makers to reveal the method used on their packaging.

How bad could this lack of transparency really be, you might ask? Read on to find out.

Here are the most commonly used methods to decaffeinate coffee without the chemicals.

This process is also known as Swiss Water Process, SWP Method, Activated Charcoal Decaffeination, or Dihydro-oxide Process. No chemicals are employed in this process that was pioneered in Switzerland in 1933. In 1988, SWP was introduced to the market, and the Swiss Water Company’s decaffeination facility near Vancouver, British Columbia, is certified organic and Kosher.

SWP uses water, temperature, and time and does not directly or indirectly add chemicals to pull out caffeine from beans. The process, instead, relies on solubility and osmosis to decaffeinate the beans. At the start of the process, green beans are cleaned and also hydrated using pure, local water. The use of an internally developed Green Coffee Extract is employed for caffeine removal. The process removes 99.9% of the caffeine without compromising flavor.

The carbon dioxide method is also known as CO2 Method, Liquid Carbon Dioxide Method, and the Supercritical Carbon Dioxide Method. This is the most recent nonsolvent method for removing caffeine and was developed by scientist Kurt Zosel of the Max Planck Institute. Using liquid CO2 in place of chemicals, this process places soaked beans in a stainless-steel container. The extractor is sealed, and liquid CO2 is forced into the coffee at a pressure of 1,000 pounds per square inch to pull out the caffeine. This process is costly and is often used to decaffeinate large quantities of commercial-grade coffee usually found in grocery stores.

Solvent-based caffeine removal uses a number of toxic solvents to draw out caffeine. These have included benzene, trichloroethylene, dichloromethane, and even chloroform. Recently, methylene chloride and ethyl acetate are more often used.  If a solvent process is not mentioned on the coffee label, it has likely been decaffeinated via direct or indirect solvent methods. In fact, it is estimated that 70% of all coffee is decaffeinated using solvents.

The direct-solvent process starts with the beans being steamed for 30 minutes to make them more soluble. They are then rinsed with a solvent for ten hours to remove caffeine. Finally, the solvent is drained away, and the beans are steamed again to remove residual solvent

The indirect-solvent method begins with soaking beans in almost boiling water for several hours. This extracts some of the caffeine, flavor, and oils from the beans. The water is pulled off and the beans are washed for about ten hours in a solvent. The solvent molecules bond with molecules of caffeine, and the mixture is heated to evaporate the solvent and caffeine. The beans are then reintroduced into the liquid to reabsorb oils and flavors.

The problem with the solvent process

In recent years, there has been increased pressure on the coffee industry to relax or cease the use of chemicals in the decaffeination process. A 2017 study conducted by Consumer Reports noted that while coffee manufacturers have switched to “safer” chemicals, they still employ toxic chemicals to strip away caffeine. These include methylene chloride and ethyl acetate.

In 1982, the National Toxicology Program released a study that found that rats who were fed DCM developed cancer in the liver and other organs.

Sadly, this study was discarded because of issues regarding how it was conducted. However, in 1985, the FDA announced that methylene chloride was indeed very dangerous. This resulted in a ban on the chemical in cosmetic use. However, use in decaffeination of coffee was allowed to persist, with the FDA stating that the levels found in decaf coffee were extremely low.

At this time, it was found that manufacturers using methylene chloride showed that it was at levels of 1 part per million or less. However, the Clean Label Project’s investigation revealed that some products tested exceeded this level.

The California Environmental Health Hazard Assessment added it to its Prop 65 list. The State of California evaluation that during pregnancy, methylene chloride can pass from mother to baby.

In March 2019, the Environmental Protection Agency ruled that it would prohibit the manufacture, processing, and distribution of methylene chloride in all paint removers/thinners for consumer use. The announcement came after 13 controversial deaths were linked to its use.

EPA Administrator Andrew Wheeler had this to say,

“After analyzing the health impacts and listening to affected families, EPA is taking action to stop the use of this chemical in paint removers intended for consumers. Today’s decision reflects EPA’s commitment to ensure that chemicals in the retail marketplace are safe for the American public.”

Symptoms like instant dizziness, loss of consciousness, and irritation of both nose and throat can occur if the chemical is inhaled. Death of the nervous system can occur when the exposure is acute. The US Department of Labor Occupational Safety and Health Administration says that workers exposed to DCM have an increased risk of developing cancer and can experience negative effects of the heart, nervous system, and liver as well as skin and eye irritation.

Methylene chloride found in a number of consumer products

In 2018, Safer Chemicals, Healthy Families, a consumer advocacy group ignited efforts to have paint thinners that contained DCM removed from stores. In 2019, the organization was joined by 18 state, local, and national organizations. A letter was sent to EPA Administrator Andrew Wheeler drawing attention to the EPA’s recently released draft risk evaluation of the chemical. The evaluation highlights 15 consumer products in addition to paint thinners, that contain DCM – all showing similar acute risks to paint thinner. This solvent was banned for use in paint strippers by the Environmental Protection Agency (EPA) in 2019.

One of the scariest things is that the methylene chloride tolerance in decaffeinated coffee has not been re-evaluated by federal authorities in 35 years.

The Clean Label Project steps in to uncover something really scary

As mentioned above, The Clean Label Project carried out its own investigation on decaf coffee to see just which brands ranked highest for levels of DCM, a chemical banned from paint thinners but still found in consumer products like decaf coffee.

I had the opportunity to ask the Executive Director of The Clean Label Project, Jaclyn Bowen,  a few questions related to an investigation that they recently conducted on decaffeinated coffee and DCM. Here are some excerpts from our interview:

First off, can you tell me a little about the Clean Label Project and why it exists?

“Clean Label Project is a national nonprofit with the mission to bring truth and transparency to consumer product labeling. We believe that sometimes what’s NOT on a label is what matters most. Food and consumer product safety attention and regulation has largely been focused on short term acute exposure to food-borne pathogens like salmonella, e.coli, and listeria. The long-term threat of cancers and reproductive disorders linked to industrial and environmental contaminant exposure from heavy metals, pesticide residues, plasticizers, and other chemicals of concern have largely gone unnoticed, untested, and therefore unregulated in food and consumer products, until now.”

“Through data, science, and benchmarking, Clean Label Project uses actual retail sampling and testing to reveal levels of contaminants in America’s best-selling consumer products. We believe that the power of transparency and consumer awareness can change the status quo.”

“Together, we are changing the definition of food and consumer product safety in America.”

What prompted the decaf coffee investigation?

“There has been a series of investigations and calls-to-action about the decaffeination process in coffee over the years. The recent ban on methylene chloride in paint strippers naturally begged the question- so it’s bad enough that we don’t want it in our consumer paint strippers, but are we still allowing it to be used to decaffeinate coffee?”

Were you surprised at what was found?

“I was surprised. I was most surprised that some of the same retailers that banned the sale of methylene chloride paint strippers would allow its use in their private label decaffeinated coffee. This should be considered especially prudent given the sensitive populations that are the most frequent consumers of decaffeinated coffee- pregnant women and people with heart disease.”

Do you think that most people are unaware of the dangers of many products that they eat and drink on a regular basis?

“I would agree, but the times are definitely changing – and quickly. Consumers are becoming increasingly concerned about the content of the food and consumer products they buy for themselves and their families. This is especially true for sensitive populations like pregnant women, infants, children, and those with health conditions. With all the food investigations that are taking place, there is a growing divide between the court of law and the court of public opinion when it comes to food and consumer product quality and safety. Complying with federal law should be viewed as table stakes. Brands should proactively align themselves with evolving consumer expectations of safety and quality.”

What do you suggest the average consumer do to protect themselves and their family from dangerous chemicals and toxins found in food and drinks?

“Be a conscious consumer. Ask questions and demand answers. So many brands make claims of natural and wholesome goodness, it’s a matter of demanding transparency. Hold brands and your favorite retailers accountable. Social media is an incredibly valuable tool for getting your voice heard. Reach out to brands, publicly, and ask for more details about their products. For our decaf coffee investigation, we are asking consumers to reach out to their favorite brands and demand that the decaffeination process be disclosed.”

If you could give consumers one warning, what would it be?

“The unfortunate reality of today’s consumer product marketplace is caveat emptor (“buyer beware”). The onus is on consumers to investigate brands and products to evaluate what products are best for themselves and their families. Think of your dollars as a vote for the food philosophies you believe in and invest accordingly.”

Be an informed consumer

We thank Jaclyn Bowen and everyone at The Clean Label Project for what they are doing to inform and protect consumers. We congratulate all consumer advocacy groups that are taking the initiative to call out what should be public knowledge and to speak in truth.

We encourage you to be a savvy consumer. Do your homework before you feed your family. Demand your right to know and support those who are pushing initiatives forward for more transparency in the labeling of consumer goods!