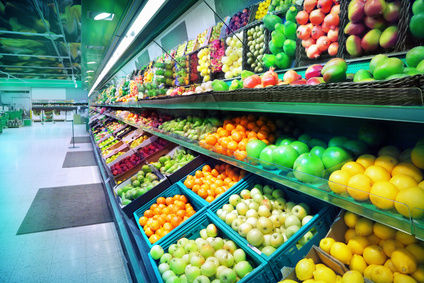 By definition, produce that is certified USDA Organic does not come into contact with the pesticides, herbicides and chemical treatments that are administered to conventionally-grown produce.

However, there is an often-overlooked addition that is the same for both conventional and organic produce: the sticker.

The adhesive glues used for produce stickers in the United States are regulated by the FDA, under rules for ‘indirect food-contact substances.’ There is no distinction made between the chemicals allowed in adhesives for conventional produce stickers and organic produce stickers.

There are a number of different chemicals approved for use in these stickers. On this list are turpentine, urea-formaldehyde resins, synthetic paraffin and petroleum, which can all be highly toxic if ingested.

Also on the list are zineb and ziram, two forms of fungicides which may interfere with metabolism and increase the risk of Parkinson’s Disease, respectively. These are only a few of the long list of potentially toxic chemicals and compounds allowed for adhesive produce sticker manufacture.

All of these substances may be absorbed through the skin of the fruit or vegetable it is on, and though the amounts of each may be low, many poisons can accumulate in the human body over time.

The whole point of organic produce is to avoid these sorts of chemicals and fungicides in our food. The fact that we may be ingesting them anyway because of a sticker is atrocious.

Before you eat produce with these stickers attached, be sure to remove the sticker, and then wash the produce thoroughly in vinegar and water. To be extra safe, soak in a solution of one part vinegar to three parts water for about ten minutes before eating, and remove the part of the skin that was in contact with the sticker.

Better yet, you can choose to buy local produce from farmers’ markets in your area which do not use stickers at all, or grow your own whenever possible. This way you can improve your odds of ensuring that there are no unwanted chemical toxins lurking in your food.

To express your concerns about this issue, you can write to the FDA or the USDA Organic Program.