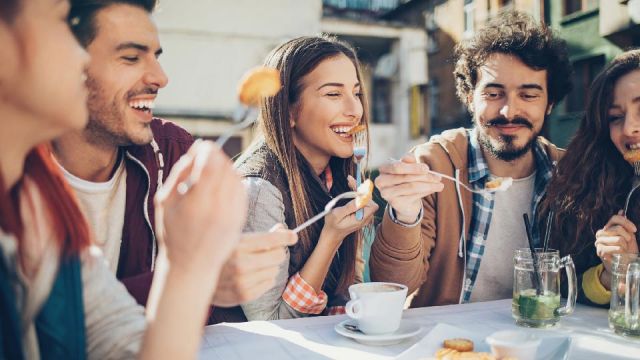 This morning, what did you have for breakfast? Now, ask yourself, how many times do you think you chewed each bite? If you’re like most, you were probably in a hurry to get out the door and start your day. As you scarfed down your avocado and eggs on toast, you probably don’t give this process a second thought.

Now, what if I told you that, on average, you should be chewing your food at least 15 times before swallowing? Double that if you’re eating something dense, like meat and vegetables. Would you rethink mealtime?

If you physically mimic chewing something 30 times right now, it seems like it’s an excessively long time to do so — wouldn’t you agree?

That is because we have gotten ourselves into some bad habits. Just as you have learned to chew rapidly and swallow, you can learn to slow this process down. In fact, Gandhi was known to chew his food at least 20 times and for him, it came naturally.

Chewing matters more than you think

We don’t often think about how complex we truly are.

For years I have been on an educational journey. Being a bit of a science nerd with a background in psychology and neuroscience, I was fascinated by how nutrition influences the brain. From Alzheimer’s to mood disorders, it’s remarkable how our lifestyles impact our neurological health. Throughout my journey, I have been able to visually map out a wide range of physiological processes. One of those being digestion. It’s remarkable.

I understand that me saying, “change the way you chew your food to change your life” is a bold statement… but bear with me! You have no idea how important this everyday task is. From nutrient absorption to healthy digestion, it all starts in your mouth.

Related: Do You Chew Your Food Well Enough?

Why we chew may seem obvious — we don’t want to choke.

Unfortunately, this is not the case. In fact, large particles that were quickly chewed and swallowed can lead to digestive issues. While that is not overly surprising, the importance of chewing your food goes far beyond nutrient absorption and the physical breakdown of what you consume.

Recently, a team of researchers from The University of Manchester and the NIH found that a certain immune cell is stimulated when you chew. Known as TH17, this cell helps fight fungal and bacterial infections that are commonly found in the mouth. These cells can also be stimulated in the skin and gut.

It was concluded that unlike other barriers, stimulating these cells is not accomplished by bacteria but my mastication. Meaning, chew, chew, chew!

You may have heard that slow eaters burn more calories — but how true is that statement?

One study, published in The Obesity Society, found that chewing until “no lumps remain” can increase diet-induced thermogenesis and in turn, the number of calories burned. It was also found that when you thoroughly chew your food, you will experience greater blood flow to your stomach and gut.

Another variable is the speed in which the food is consumed. Researchers have found that those who eat slowly and take their time chewing eat less. For some, this can also help you become more mindful at meal time.

Improves the health of your teeth

It is well-understood that chewing produces saliva which supports digestion, but did you know that chewing could actually help strengthen your teeth and jaw?

When humans were hunter-gatherers, they consumed everything in raw form, including meats and nuts. However, as our world modernized, foods become not only softer but heavily processed. This has led experts to believe that a lack of chewing contributes to some of the common dental problems we see today.

By studying the skeletons of ancient humans, it appears that their teeth were well-aligned. Chewing coarse, high-fiber foods may help stimulate the growth of the alveolar bone — which supports your teeth. From modern issues surrounding overbites to the prevalence of gum disease, these may relate to chewing (or a lack thereof).

How many times should I chew?

Although scientists have not yet come up with a magic number, you should be chewing an average of 15 to 30 times a bite. Horace Fletcher, an American health guru from the late 1800s used to recommend chewing once for every tooth — or 32 times per mouthful. He reportedly chewed his food 100 times a minute before swallowing.

Starting today, really focus at meal time. Chew steadily and eat smaller morsels. The smaller the piece of food, the better you will chew it. Once your food has lost texture, swallow. Then, only drink water your mouth is empty.

Like anything practiced, this process will become second nature.