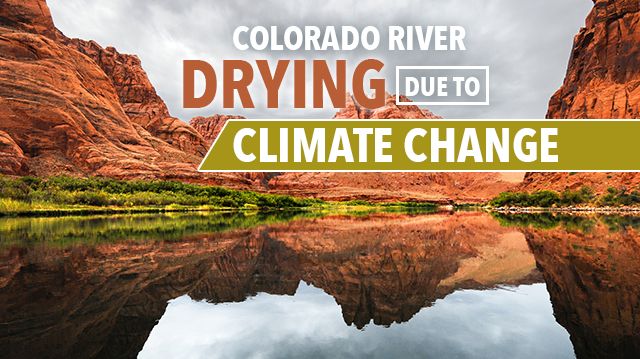 Climate change is a very real and escalating danger to our entire planet and all of its inhabitants. The world has recently recorded the highest average temperatures on record, natural disasters are on the rise, and the shifting levels of sea ice are killing off animals in huge numbers. This is just the tip of the iceberg.

Last year, President Obama traveled to Alaska to highlight the consequences of climate change on local populations. Rising sea levels are threatening several Alaskan communities, and native populations are extremely worried. The National Oceanography Center has predicted that if the current course of climate change continues, many of the world’s marine animals and plant life may become extinct by the year 2100.

Additionally, if the climate change threat continues to worsen, our entire ecosystem, and our species for that matter, may be in for a world of even greater hurt.

Another victim of the change in climate patterns is the Colorado River.

The Colorado River, which flows through the American Southwest and Mexico, provides water for about 40 million Americans across seven US states. Water from this river is also used to irrigate about 4.5 million acres of farmland. However, according to a new study published in Geophysical Research Letters, water supplies are lowering due to warming temperatures.

The study also indicates that the global warming effects of climate change are making droughts across the West worse.

The authors of the new study wrote:

“Since 1988, a marked increase in the frequency of warm years with lower flows than expected, given precipitation, suggests continued warming temperatures will be an increasingly important influence in reducing future UCRB [upper Colorado River basin] water supplies.”

A great deal of the water flowing through the Colorado River comes from winter storms above the Rocky Mountains. The study found that in the last few decades, flows have been lighter than anticipated, and escalating temperatures are the likely culprit. If this pattern continues, droughts in the West could become even worse, as the Colorado River may have less water to offer.

James Prairie of the Upper Colorado Regional Office of the US Bureau of Reclamation (not involved with the study), commented:

“What we’re seeing now is that, consistent with more of the global observations in terms of warming, that it’s not just a fluctuation that’s within that historical back and forth. That oscillation is starting to break from that range.”

“If you look at the trend in temperature over this period, we see a warming trend. We’re finding in those years temperatures explaining a lot more of the variability.”

According to Peter Soeth of the US Bureau of Reclamation, diminished water supplies in Colorado River reservoirs could have several significant impacts. These include less water for households, for farmers, and also for hydropower electrical grids.

Water is, needless to say, one of our most precious resources. It’s far too easy for us to ignore the effects of climate change when it doesn’t personally affect us, but it’s beginning to be felt in the homes of millions of people. If we don’t do something about our greenhouse gas emissions soon, and work together to clean up the planet, we may see things get worse, indeed.