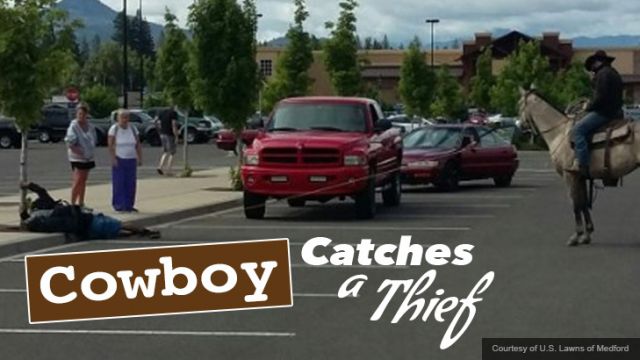 A cattle rancher on horseback chased down a thief in the parking lot of an Oregon Walmart and lassoed him, one of the more creative ways that citizens have been involved in stopping crime. Police then arrived to arrest the man, who had allegedly stolen a bicycle from a bike rack outside the store in Eagle Point.

The woman who owned the bike and others chased the man on foot, but were unsuccessful. So rancher Robert Borba took his horse off its trailer, mounted up, and caught the thief.

Eagle Point police officer Chris Adams said that when he arrived there was a large crowd standing around a young man on the ground with the rope around his ankle.

Borba, talking to the Mail Tribune, said he brought out his horse because “I seen this fella trying to get up to speed on a bicycle, I wasn’t going to catch him on foot. I just don’t run very fast.”

Borba instead lassoed the man around his legs, causing him to stumble to the ground, then dragged him to the end of the parking lot. Borba said the man grabbed a tree and tried to break free, but Borba and his horse, Long John, kept the rope taut. He then called 911 and waited with the suspect for the police for 15 minutes.

One witness, David Stepp, called the whole situation “the best day of my life.”

“I was laughing too hard to intervene,” he said.

Other fun ways thieves have been caught

Over time, thieves have been caught in all sorts of other creative ways, often due to their own slip-ups.

For example, Albert Wilson was caught after he took a selfie on the phone he’d just stolen. The phone’s owner had it set up to automatically email her all her photos, making it easy to catch the thief.

Even worse were the thieves who accidentally butt-dialed 911 while they were breaking into a car in 2013. The dispatcher on the line heard the two thieves talking about drugs, then about how to break into the car, then the sound of glass breaking. Police used clues from their conversation to find the two men.

Then there was the robber who got robbed and reported it to police. Mauricio Fierro robbed a pharmacy in Brazil, leaving the engine running on his stolen car outside so that he could make a quick getaway. However, when he came out, his stolen car had been stolen.

As Fierro stood confused in the parking lot, another criminal came along and snatched the loot he’d just taken. Fierro went to the police station to report the stolen cash and car, but while there he ran into none other than the pharmacist he’d just robbed. He was quickly taken into custody.

Another thief robbed a billboard owner in New Zealand, and was caught after the owner plastered his face on billboards around Auckland city. A suspicious onlooker had photographed the man as he stole electrical transformers on billboard lights.

The photographer then gave the photos to Mark Venter, who runs one of New Zealand’s oldest billboard companies. Venter mounted the images on four city billboards with the words “Who is this thief? Reward $500.”

Then there is the woman who turned the tables on the thief who took her phone after he dropped his wallet while he was robbing her. She got her friends to text a message to her phone saying that she now had possession of his ID cards, a $100 VISA gift card, four credit cards and $195 in cash and that he should met her at the place where he robbed her, or she would hand his ID over to the police. Articles covering the robbery don’t make it clear if she ever got her phone back, but she certainly stood up for herself.

Finally, there were the thieves who kindly left their tag number behind after trying to steal an ATM machine. They had tied chains around it and were using their car to try to carry away the whole thing, but the chains didn’t hold and were left behind, along with the car’s rear bumper and license plate. From that, they were easily traced and arrested.

On a more serious note, understanding what social and economic factors contribute to people feeling the need to steal is the most important step in bringing down theft numbers. But there are also lots of things that individuals can indeed do to protect themselves. Websites such as SpotCrime.com can help you stay informed, and a range of simple techniques, such as pet dogs and outdoor lighting, can help protect a home.