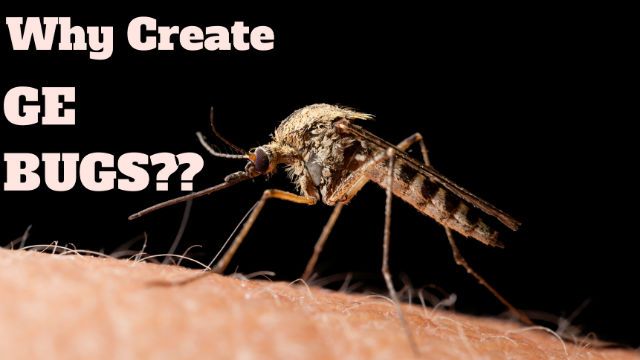 On the GE bugs, the Center for Food Safety writes, “presented as a possible ‘solution’ to various maladies, like GE crops before them, they will almost certainly create more – and more intractable – problems than they will solve.”

The problems that the insects are being engineered to “solve” include battling disease and controlling populations of other insects. One insect that has already been through some field tests – and is seeking approval to go through more – is the GE mosquito. The primary biotech firm behind these critters is Oxitec, which is based in the United Kingdom.

These mosquitos – frighteningly – have already been released in some trials. Field trials have occurred in Brazil, the Cayman Islands and Malaysia, and trials in Key West, Florida are in the planning stages.

The Oxitec GE mosquito is designed to have its offspring die before they reach the age in which they are able to transmit diseases, so that they are unable to spread dengue fever. Other biotech firms are working on another type of GE mosquito, one which would be unable to carry the plasmodium which spreads malaria.

While controlling the spread of infectious diseases is a worthy goal, GE mosquitoes could do significant harm. The Center for Food Safety states that if one species of mosquito dies off, other species may replace it. It also asserts that wildlife and fish which rely on mosquitos for food could suffer if the population suddenly dropped.

In 2013, a study was published in the journal Ecology and Evolution entitled “Release of Genetically Engineered Insects: A Framework to Identify Potential Ecological Effects.” In this study, researchers sought to look at the short and long term effects to ecosystems when GE insects are introduced. The researchers found some difficulties with measuring these effects.

Joe Kaser, a PhD student at the UM Department of Entomology, who was involved with the study, stated, “the population isn’t the same the whole time. You do have these transitory phases where the potential effects could be quite different than the effects during the steady state phase. Our framework really tries to evaluate the entire range of potential effects.”

Kaser added, “while there’s an amazing and impressive amount of research that’s been done on mosquitoes, there wasn’t a whole lot of information about how they might be important ecologically.” It is precisely this lack of information that may end up hurting us should more GE insects be released.

Besides GE mosquitoes, other GE insects in the works include a diamondback moth designed with the hope of controlling the grubs which consume cabbage plants, as well as a medfly and an apple codling moth, engineered to be sterile or to pass lethal genes to their offspring. Additionally, a field trial of Oxitec pink bollworms occurred in Arizona. These bollworms had a fluorescent gene so that their travel range could be studied.

On the impact of this line of research, the Center for Food Safety writes:

“In general, the potential release of GE insects into the environment poses imminent harm to native ecosystems and human health. Insects are an integral base to many food chains, and altering their populations can harm other species that rely on them for food. Further, attempting to alter ecosystems in such a way can put evolutionary pressure on harmful insects and diseases, which can become more difficult than before the release of GE insects.”

The Center for Food Safety adds, “given that millions of GM insects must be released each week to have any effect on wild populations, many of these insects will inevitably end up in our food – thus, FDA must also assess these insects as new food additives.” Disturbing, no?

We will keep a close watch on developments in this field, and hope that the spread of information and public conscience will spur some efforts to shut these projects down – or at least to require in-depth, detailed study of their impact before they go forward.

We have already seen GE crops leading to pesticide resistance, and encouraging the use of even more pesticides. Do we really need to find out firsthand what can go wrong once the GE insect project begins to show consequences?