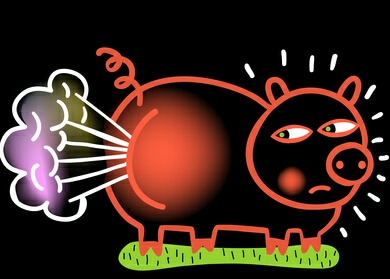 Who me? I never have gas……….. this is just not true. Don’t try to pass yourself off as gasless because it won’t hold up against the scientific evidence. While some people have more gas than others, the fact remains, everyone has gas. But what is gas and what does it mean when you have a lot of it?

Gas is simply trapped air that must escape through the mouth or the anus. Gas is made up of carbon dioxide, nitrogen, oxygen, hydrogen and sometimes methane. Gas passed through the anus can also contain sulfur. The stronger the odor – the more sulfur.

Where Does Gas Come From?

Gas is the result of swallowed air, and the breakdown of foods during digestion. Swallowing air happens when we eat and drink. More air is swallowed when we smoke, chew gum, drink fizzy drinks, suck on hard candy or wear loose-fitting dentures.

Some gas exits the stomach when we burp and the remaining travels from the stomach to the small intestine where some of it is absorbed. Some of gas is absorbed by the blood and carried to the lungs where it is released in our breath.

Carbohydrates that are not fully digested are broken down in the large intestine where they release hydrogen and carbon dioxide. The hydrogen gas is taken in by bacteria which produce methane gas or hydrogen sulfide.

Your eating habits, by and large, determine the amount and nature of the gas that your body expels. Some people who switch from a diet low in fiber to a diet high in fiber experience bloating, stomach pain or excessive gas. While fiber is a good thing for many reasons, introducing high-fiber foods should be done slowly. 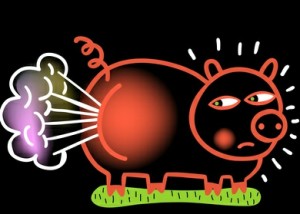 The same advice should be taken for probiotics. Introducing helpful bacteria into your digestive system is a good thing but may also result in extra gas. It just takes the body a little time to get used to the new bacteria. Excessive gas may occur because of poor digestion or absorption of sugars or an overgrowth of bacteria in the small intestine

Some conditions such as Crohn’s disease and even diabetes may cause an increase in bacteria. If you have excessive gas along with other symptoms such as diarrhea, constipation, pain or consistent bloating, it is wise to see a health practitioner. Although excessive gas is not common, when diagnosed, treatment usually involves changes in diet, antibiotics or medications that stimulate the muscles in the intestine.

Foods that Cause Gas

Most foods that contain carbohydrates will encourage intestinal gas. However, some foods may cause gas for some people but not for others. Foods such as beans, broccoli, cabbage, onions, asparagus, whole wheat, apples, peaches, pear and milk products often cause gas due to their carbohydrate content. Gas is often common in people who consume a lot of soft drinks, fruit drinks or other foods containing high fructose corn syrup.

Although we seem to have blacklisted gas as being something to be ashamed of, in some cultures gas is expected and accepted. As always, consume a diet rich in whole foods, drink plenty of filtered water, exercise regularly and don’t hold back your gas.