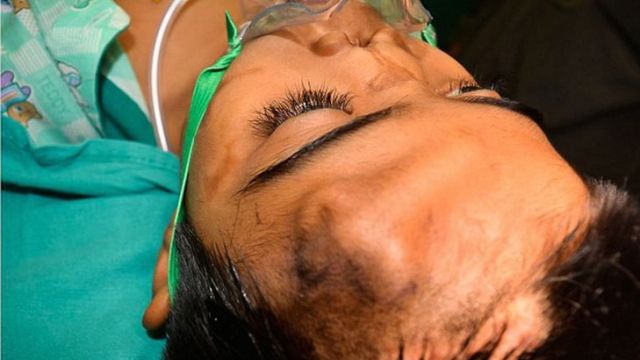 After suffering from pneumonia just after his birth, Arun Patel’s nose became infected. Due to the damaged cartilage, his nose could not be fixed. But now, thanks to a team of dedicated doctors, Arun has a new nose.

Twelve-year-old boy gets a new nose

Arun Patel’s parents took him to a doctor in their village in the central state of Madhya in Pradesh, India, to cure him from pneumonia. Unfortunately, due to his inexperience and no medical training, the “doctor” administered injections to the nine-month-old’s face. Arun’s condition quickly worsened, causing the tissue to die and drop off.

Ten years later, thanks to a team of doctors from Indore city in Madhya Pradesh, India, Arun has a new nose.

The dedicated team of doctors, headed by Dr. Ashwini Dash, conducted a rare four-phased plastic surgery to grow and transplant a new nose. Dr. Dash told the BBC that he was “confident that the new nose would work properly like his other organs.”

One year to complete

Since, a normal rhinoplasty was not possible, the doctors decided to perform the special plastic surgery on him, which is medically referred to as a “pre-fabricated forehead flap rhinoplasty,” said Dash.

The entire operation involved putting a silicon tissue expander on the boy’s forehead and then taking cartilage from his chest to grow the nose. Once the nose grew to full size, doctors removed the artificial nose and implanted it on Arun’s face. Finally, doctors repaired his forehead.

In 2013, following a traffic accident, a man from China’s Fujian province also had a new nose grown successfully on his forehead, according to the BBC.

The doctors in charge of this new case, covered all costs for the medical treatment, according to Dr. Dash. Arun told the Daily Mail a new nose has given him a new life.