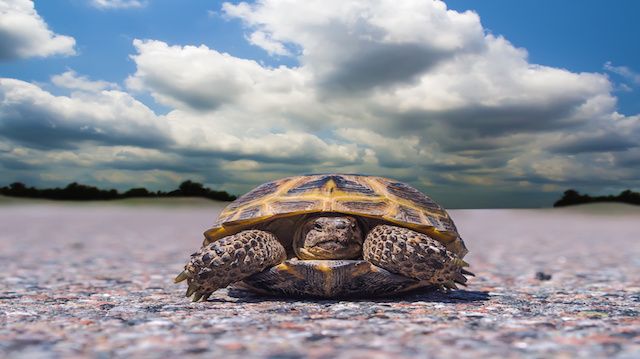 Roadway mortality contributes to serious population declines in turtle species across the country. If you want to help these shelled creatures get to where they are going safely, there’s a correct way to do it.

Mating and nesting season varies according to region and species. In the East and Midwest, the season starts in mid-May and lasts until the end of June. Those are the months that motorist should stay on the lookout for turtles, especially when traveling along roads near wetlands and woods.

If you see a turtle in the road and want to help it, always put it on the side of the road in the direction in which it was heading. If you move it back from where it came, it will simply turn around and attempt to cross the road again. The turtle knows where it is going — it just can’t get there very fast and there’s a roadway in between. Always ensure that you are safe before trying to move a turtle across a street. Use hazard lights as a warning to other motorists.

Don’t try to relocate a turtle, unless the situation is extremely dangerous. Turtles are territorial, and if moved, they will try to return to their home range. Not only will relocation put a turtle at further risk of crossing roads, but some turtles in strange territories become depressed, stop eating and die.

Pick up a turtle very gently, and wear gloves if you have them. Pick them up by the edges of their shells, in the middle of the body. It’s not uncommon for turtles to empty their bladders when lifted, so be prepared.

Avoid too much handling. Although most species — not all — simply retreat into the shell and won’t harm people, excess handling upsets them. They are wild creatures. Give a turtle a quick visual inspection and send him on his way.

If you find an injured turtle, don’t try to care for it yourself. Instead, contact a veterinarian or licensed wildlife rehabilitator.

Some turtle species will bite viciously when handled. Snapping turtles — consisting of the common snapping turtle and the alligator snapping turtle in North America — exert tremendous jaw pressure. They generally live in streams and shallow ponds, so there’s likely such water sources nearby if you see one crossing a road. Snapping turtles are much larger than other common species, such as the box, painted and wood turtles. While there are instances of snapping turtles biting off fingers, the greater probability is that a snapping turtle will latch on and just not let go.

For that reason, if you encounter a snapping turtle in the road, stay away from the head. Do not pick it up by the tail or legs to move it — these are heavy turtles, and that may cause serious damage. A snow shovel is a good tool for moving a snapper, as is any sort of dolly. If you live in an area where snapping turtles are common, keep such devices in your vehicle for potential turtle saving.

If you find a turtle that has just been killed by a car, collect the body and contact your state Department of Environmental Protection or its equivalent immediately. In some states, biologists will remove the eggs from female turtles belonging to an endangered species and incubate them.

Never take a turtle from the road or anywhere else with the intention of making it a pet. Not only is it illegal to keep most native turtle species as pets, but it’s almost impossible to provide habitat where the turtle can thrive. Don’t confuse “remaining alive” with thriving.

If you do have a legal pet turtle you can no longer keep, do not release it into the wild. The red-eared slider is the most common turtle kept as a pet, and many people do not realize how large these turtles can grow. Pet turtles released into the wild can spread disease to native species, compete with rare or endangered turtles for habitat, and seriously upset ecological balance. If you can’t find a home for the turtle, ask your vet about euthanasia.

Helping a turtle cross the road is a small gesture, but it’s one that makes a difference to that turtle and to nature as a whole.