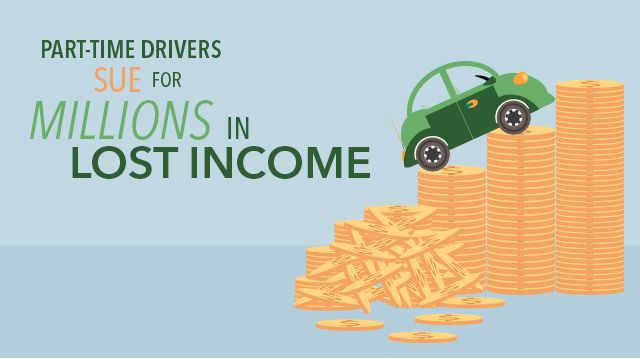 Whether a worker is technically classified as an employee or contractor makes a huge difference — both to the worker and the company that writes their paychecks. Employers have to pay a portion of each employee’s Social Security and medicare fees. They’re also responsible for a percentage of unemployment compensation for released workers and employees are likely to receive additional benefits. Contractors pay their own way.

Another important difference is that contractors supply their own equipment, materials and tools.

For most companies this aspect of employment law is less important than taxes and benefits. For car-sharing service Lyft, a competitor of Uber, it represents $126 million dollars. That is the estimated amount that the company would have needed to reimburse workers if they had been classified as employees instead of contractors.

The computation has been made to help California courts decide on a lawsuit brought against Lyft by its drivers. The drivers contend that they should be classified as employees and are demanding reimbursement for costs incurred as contractors. Lyft has agreed to settle the suit for $12.25 million, though the settlement has yet to be approved by the courts.

The settlement does not require Lyft to reclassify its drivers as employees, but it does promise additional benefits. For example, the company will no longer be able to fire drivers at will. The company also agreed to foot the bill if and when drivers require arbitration over status deactivation or pay issues.

Lyft’s main argument in support of its classification scheme is that most drivers are part-time and use the service only to supplement existing income. Just over 150,000 drivers are plaintiffs in the lawsuits. More than 100,000 of these worked fewer than 60 hours for the company over the period in question. The average driver involved in the settlement worked 92 hours over the same period.

Worker classification is a growing issue across burgeoning start-ups of the newly popularized on-demand economy.

Critics see the use of independent contractors as a violation of employment law and obvious case of for-profit companies choosing to maximize profits by mistreating workers. These accusations become stronger and more widespread as on-demand companies become more and more profitable. Those less critical of the new companies emphasize workers’ choice. Workers, they argue, are more interested in flexibility, self-determined work hours and employment freedom than they have been in the past. They would rather be independent contractors for the on-demand economy than work regular nine-to-fives for traditional companies.

The issue is made more complicated by the fact that any training or benefits offered independent contractors can then be used in defense of a forced switch to employee status.

Alex Chriss, general manager of Self-Employed Solutions at Intuit, argues that new employment classifications schemes are needed to keep-up with shifting economic trends and preferences. “Existing rules and regulations around employee classification,” Chriss writes, “discourage marketplaces from partnering closely with companies providing worker services, such as healthcare, taxes or retirement, out of fear they’ll be subject to a misclassification suit.”

Some companies are already taking advantage of gaps in the on-demand marketplace. SliceLab, for example, is offering an insurance product specifically for workers in this new industry. Plans to provide insurance policies per transaction are uniquely tailored for on-demand rideshare drivers and homeshare hosts. Peer.org offers on-demand economy workers portable, affordable benefits such as insurance and retirement savings plans.

New ideas are emerging from regulators and regulatory advisers as well. Some propose universal benefits that can be provided independent of employment type. This way on-demand companies could provide benefits without fear of facing forced worker reclassification.

Some regulators are trying to give independent contractors more power without enforcing a reclassification. In 2015, the Seattle City Council approved a bill to allow rideshare workers to unionize and negotiate wages. The move is expected to come up against legal problems as independent contractors are technically small businesses. Their unionization is thus considered a form of price fixing.

The number one question in this battle is whether new companies should be forced into our current worker-protection paradigm or whether our regulatory framework needs a makeover. The answer may determine the ultimate success or failure of the on-demand economy.