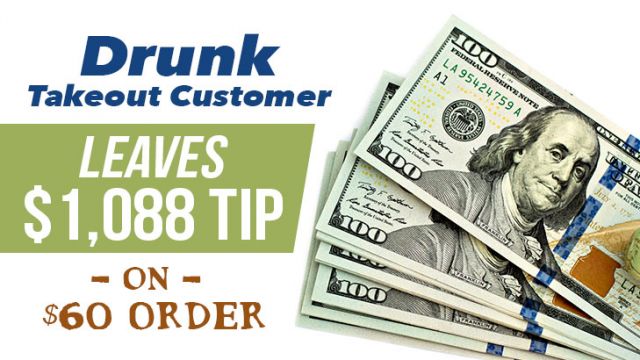 If you mistakenly left a server an extremely large tip, what would you do? When a drunken customer left more than $1,000 tip on a $60 his meal at a Thai restaurant in Edgewater, Colo. the server was ecstatic — until the customer returned the next morning asking for it back.

The art of fine tipping

Serving is a tough job and not everyone can do it. I served my way through college. I worked hard to get good tips and was extremely grateful when I received great tips. But at no time did I ever expect a tip at all.

Don’t get me wrong, I appreciated every one of my hard-earned tips — from the quarters left under the plate rim by a struggling senior to the hundreds left by well-to-do patrons — but I never felt that it was my right to be tipped. Rather, it was a gratuity for a job well-done.

Tipping is not mandatory in most of the United States, but it is customary in almost every restaurant and especially at sit-down restaurants. Food servers depend on tips as an essential part of their wage. So, when a customer comes along and tips particularly well to show appreciation for prompt and exceptional service, a server feels a sense of pride.

The general rule of thumb when it comes to tipping is between 15 and 20 percent. Any less and service was not so great. Any more and service went above and beyond. But when someone leaves a tip of more than $1,000, any server with good sense knows it was a mistake or the customer was plastered — as was the case when a  customer left a $1,088 tip while waiting for a takeout order.

Ricky Perez was floored when he was counting the $100 bills after the customer left the Thailicious restaurant in Edgewater, Colorado. “It was the biggest one, yeah,” said Perez. “World breaking? Well, for me, yeah.”

But like all servers with good common sense, Perez brought it straight to the owner, Bee Anantatho, and she consulted with her staff to clarify the situation. Normally, they put all tips in a jar to be shared among the servers. Anantatho remembers the reaction of the server who’d received the tip.

“He said he’d read a lot of stories like this,” Anantatho told The Denver Post, “but usually the tip is a couple hundred dollars, not $1,000,” she said. Perez was elated. Relying on her business instinct, Anantatho told her crew they should hold on to the money, just in case he came back for it. And her instincts were correct.

Good service but not that good

The next day, the moment the Thai restaurant opened, the customer returned and asked for his tip back.

“He said, ‘I’m sorry, I was drunk,’ ” Anantatho said. “He didn’t know he put all the money he had in the checkbook.” Some of the bills were $100 bills, and Anantatho suspected he might have thought they were $1 bills.

He then gave her back enough to cover the $60 dinner and about a $40 tip. Although disappointed for her staff, Anantatho’s happy with the way she handled the embarrassing situation by making it easy for the customer. Anantatho believes the customer will be back, she told The Denver Post.

Is the customer always right?

Anantatho handled the situation with acumen, avoiding the embarrassment that inevitably followed as the patron returned to the restaurant the next morning. Some servers may not have been so quick to return the money. In fact, some servers, when stiffed, have even gone as so far to post their customer’s tipless receipts, names, signatures and even last four digits of their credit card on social media, in an attempt to out a customer’s bad tipping behavior.

Personally, that’s going way too far. I even knew of a server who would chase customers into the parking lot for not tipping or not tipping enough. So you have to wonder, if someone is capable of those measures, maybe they need to sharpen their customer service skills just a bit.

And yes even the best, most friendliest and efficient servers get stiffed occasionally. But if you’re good at what you do, other, more generous customers usually make up for the losses.

Do you think it was appropriate for the customer to return the next morning and ask for his tip back? Or should he have eaten his Thai food with a side of “crow” and just accepted the loss? Tell us what you think.