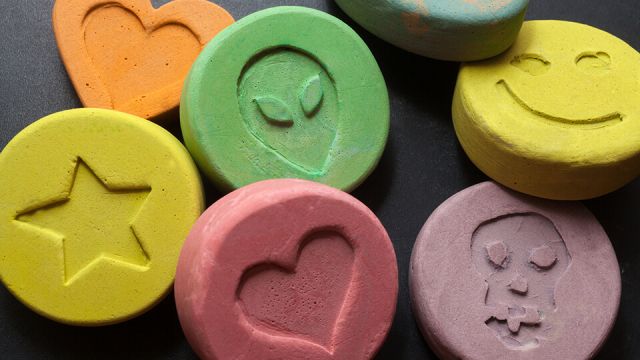 When you think about someone taking ecstasy, you probably think of thunderous raves, glow sticks and twenty-somethings hugging each other, right? While that’s certainly one use, the active compound found within this club drug, sometimes called the “love drug,” may actually have some important therapeutic benefits.

Namely, some researchers are now studying MDMA, the active ingredient in ecstasy, for its potential to help sufferers of PTSD. Another research group is preparing to study its effects on curbing alcoholism. Based on what we know about the healing effects of clinical MDMA use so far, things are looking pretty promising.

A bit about ecstasy

First of all, despite the exciting potential benefits of ecstasy, this is not a drug to be casually messed with. Ecstasy, especially in large doses or over long periods of time, can be quite dangerous. First of all, it almost always contains more than just pure MDMA. It is often cut with speed or other speed-like drugs. As with all drugs sold illegally on the street, it can be cut with just about anything.

Ecstasy is called the “love drug” for a reason. It affects neurons in the brain that utilize serotonin, thus leaving the user with a rush of pleasant feelings. This effect can last up to eight hours or so before it gradually wears off. One benefit of this drug is that taking it can bring up past memories, both pleasant and painful, and allow the user to deal with those memories from a positive perspective. It’s a way to face things in a positive light, and even if that positive light is chemically derived, it can work. Additionally, the beneficial effects may last long-term if the user successfully works through an issue.

Taking too much ecstasy, however, can be very dangerous. If large doses are taken, the body may be unable to regulate its temperature. If medical attention is not sought, organ damage or death from hyperthermia (a quick increase in body temperature) may occur. As ecstasy has a unique effect on its metabolism within the body, it’s possible to get too much in your body quickly, and “too much” may vary between individuals. Other dangers include the risk of spikes in blood pressure and heart rate, which can also be fatal, especially for individuals who have cardiovascular issues.

Also, aside from a “low” the day after taking ecstasy, some researchers have found that it may impair memory. Other research has not had this conclusion, however, so the debate rages on for now. Psychological effects may also occur in cases of ecstasy abuse, and it may be addictive.

Due to its potential therapeutic abilities, researchers have been studying the effects of MDMA on sufferers of PTSD. Last November, a study by the Multidisciplinary Association for Psychedelic Studies (MAPS) found that two or three sessions of MDMA therapy relieved a whopping 67 percent of study participants from their PTSD symptoms. These study participants were determined to no longer have PTSD, based on clinical measurements, after the study.

As far as the control group, which did not receive MDMA, 23 percent of them were also relieved of their PTSD symptoms simply through psychotherapy. However, 67 percent versus 23 percent is a huge difference. According to the study’s lead investigator, Michael Mithoefer:

“The results I’ve seen so far with MDMA are so much better than anything I’ve seen so far.” Mithoefer reports that some people experience positive effects from MDMA sessions years after the session, and that’s highly encouraging. More research for further phases of this trial are planned, and potentially already underway.

It’s possible that MDMA treatments may help to ease or even eliminate other conditions, as well. British physicians are hoping that small doses of MDMA may help individuals with alcoholism to recover. On the background of this upcoming study, Ben Sessa of Imperial College London stated:

“We know that MDMA works really well in helping people who have suffered trauma and it helps to build empathy.”

The clinical trial, which is currently in planning phases, will focus on 20 people who drink five or more bottles of wine each day. All of these individuals have attempted other treatments for their alcoholism, to no avail. Along with receiving small doses of MDMA, the participants will also undergo psychotherapy sessions.

On alcoholism and MDMA, Sessa explains:

“After 100 years of modern psychiatry, our treatments are really poor. The chances of relapse for these patients are really high — 90 percent at three years. No one has ever given MDMA to treat alcoholism before.”

We will have to wait for the results of this research, but if this method could give alcoholics a solid chance to recover, that’s a pretty great benefit.

All in all, MDMA is one substance that seems, based on the research so far, to have exciting potential in small, controlled doses in a safe environment. The more we learn about psychedelic drugs, for years regarded as “all bad,” the more we see important ways we can use them for good. It’s all about responsible, conscious intention.