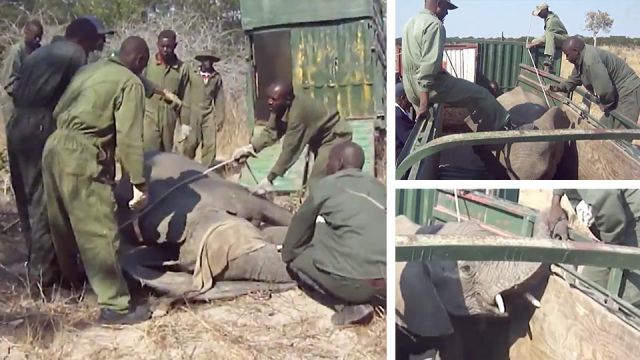 1. Zimbabwe is selling wild elephants to Chinese zoos. I know some of you may not want to go through this thread because it’s too painful…but just remember the elephants don’t have the luxury of avoiding it..so please take a minute to learn if you really care about them.

14. In the meantime, you should follow and support @DSWT. They raise orphaned elephants, help to take care of injured/ill elephants, and they have armed patrols to catch poachers in action and hold them accountable. pic.twitter.com/xwbv5EnBZZ

As seen in one of the tweets above, Ali points out that people should follow Sheldrick Wildlife’s twitter account, as they are known to catch poachers and raise elephants.

Many assume the young elephants will be legally exported to China and put in their zoos. Watch one of the videos for yourself. Viewer discretion is advised.

A major reason that these poachers are able to get away with this, as noted by Ali, is due to Zimbabwe’s massive debt and their president’s corrupt spending problems. In recent years, these captures have been kept as quiet as you could possibly imagine.

Essentially, the group of poachers looks for a herd of elephants. Then a helicopter is flown near them and sedatives are shot, especially towards the younger ones, from a rifle. Once the hit elephant falls to it’s side, the poachers wait for the others to disperse and then rush in and “provide aid” to the lone animal. Once the scene quiets down, the poaching team bundles the animal up, and drags it out to their trailers.

Thankfully for people like Britain Guardian, who posted the video, we can see a unique perspective of how this practice is done. As expected, this practice has been fiercely opposed by animal rights groups.

Historically, more than 1,000 wild elephants from Africa and Asia have been taken from the wild and sold to zoos around the globe.

This baby elephant getting into a tub is my spirit animal pic.twitter.com/upBkeRGx98

The trade of wild animals is a serious problem worldwide, so it is encouraging to see people speaking out about the issue.

What are your thoughts about poaching elephants? Should this be allowed? Should these animals be in zoos? Let us know your opinion on this sad situation.