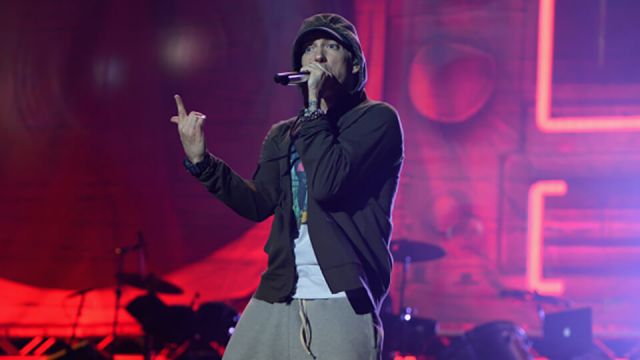 Last night, Eminem went viral on all social media platforms after a video was shown of him at the BET Hip Hop Awards dissing President Trump.

In the video, Eminem angrily accuses President Trump of racism, disrespect for our military, hypocrisy and even hints at using physical violence against him. The video has over 185,000 retweets on BET’s main Twitter account. More importantly, Eminem has been in the top three trending topics on Twitter for over 12 hours, which is rare.

Check out the video for yourself:

The FULL verse that EVERYBODY is talking about! @eminem BODIED THIS! #HipHopAwards pic.twitter.com/zoS0wEwjQF

Due to how the video went viral at an extreme rate, it sparked a tremendous amount of chatter online.

I appreciate you @Eminem ✊🏾 pic.twitter.com/nwavBwsOkQ

Racism is the only thing he’s Fantastic 4(fantastic for), cause that’s how he gets his rock off, he’s orange. Sheesh @Eminem!! 🔥🔥✊🏾🔥🔥#United pic.twitter.com/wcL28BCWpy

Despite the vast amount of attention to Eminem’s freestyle, President Trump has yet to respond.

Today, a video has surfaced from 2004 of when businessman Donald Trump was praising Eminem on an MTV Eminem concert special called “The Shady National Convention.” Trump voted for Eminem’s alter-ego, Slim Shady.

if trump tweets how he never liked eminem or tries to insult him, all we gotta do is drop this video. #HipHopAwards @BET pic.twitter.com/XYpXBwKnHO

Now, it appears the two don’t have quite the same relationship as they did in 2004.

What are your thoughts on the Eminem diss? Are you surprised it went so viral? Let us know!