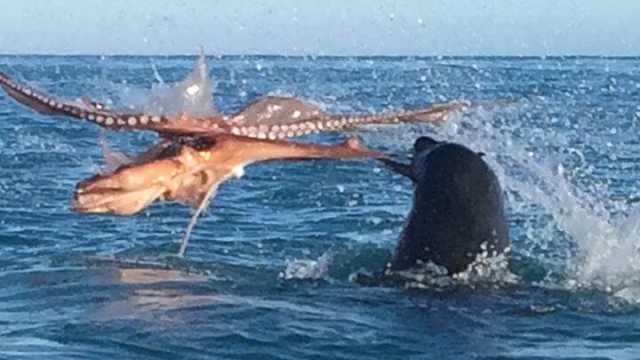 It’s being described as an epic deathmatch between a humongous 265-pound fur seal and a gargantuan octopus. The iPhone footage capturing the harrowing battle was taken by a group of kayakers in New Zealand’s South Bay on June 20. It shows a hungry seal and a tentacled octopus locked in a life-or-death struggle. Ultimately, the seal prevails as it rips its mollusk rival to shreds and devours it for lunch.

In fact, conflicts between giant seals and octopuses are common. After all, mollusks are a favorite food of amphibious mammals like seals. Most people probably were instinctively rooting for the seal in this deadly matchup. However, despite the fact that octopuses have traditionally inspired fear in humans, scientists are discovering that they are surprisingly intelligent. Here are five amazing things you probably didn’t know about octopuses:

Scientists estimate that each sucker on an octopus’s’ tentacles can lift 35 pounds. That means a typical octopus has a sucking capacity equal to 56,000 pounds. As cephalopod expert James Woods notes, “Divers should be very careful.”

2. Octopuses are masters of camouflage

An octopus can change colors, patterns and textures in less than seven-tenths of a second. Researchers believe no other creature even comes close in terms of its ability to blend into the environment and make itself invisible to predators. However, octopuses can also put on an impressive light show that allows them to mimic natural phenomena and other sea creatures.

Octopuses are surprisingly intelligent. Researchers have discovered they can manipulate objects with amazing dexterity and intent. For example, “[They can] open jars — and sometimes screw the lids back on — and they enjoy assembling and disassembling Mr. Potato Head and Legos.”

Octopuses change color depending on their emotional states. An angry octopus will turn darker, for example, but become lighter when it is relaxed. They also appear to recognize their handlers, but experiments show that they will spray individuals with their water spouts that they have learned to dislike or distrust.

According to Sy Montgomery, a naturalist, octopuses are extremely social creatures. Indeed, one species — a striped variety found in the Pacific — even “shares dens with mates and makes love in the position favored by missionaries.” Who would have that that octopuses could be sexy?

Throughout history, octopuses have been depicted and envisioned as fearsomely inhuman creatures. For instance, the writer Victor Hugo wrote that, “The tiger can only devour you” but the octopus, with its “innumerable hideous mouths … sucks your life-blood away.

Today, however, marine biologists are discovering that octopuses are surprisingly bright, curious and even empathetic creatures. We humans are only beginning to understand how amazing this very alien form of intelligence is.