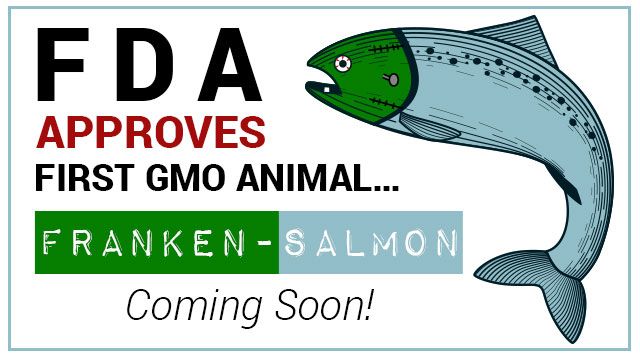 The Food and Drug Administration (FDA), you know that group of good guys that are charged with protecting the health and welfare of Americans, has just approved the first ever genetically modified animal to be sold in American supermarkets. And that is not the worst of it… this Franken-salmon won’t even be labeled. WHAT????

I am so sick and tired of these regulating agencies speaking out of both sides of their mouth. How can they sleep at night making such a decision? How can they be for us when their actions clearly indicate they are for something, anything, other than us?

Here is the mission of this regulating agency, in case you are not familiar with it:

“FDA is responsible for protecting the public health by assuring the safety, efficacy and security of human and veterinary drugs, biological products, medical devices, our nation’s food supply, cosmetics, and products that emit radiation.”

We reported in 2013 about AquaBounty Technologies that claims its monster fish are safe to eat. Of course, we were all hoping it would never come to be.

If approved, AquaBounty’s GMO salmon would be the first genetically engineered animal to be sold for human consumption and could appear in restaurants and supermarkets as early 2015.

A Purdue University study showed that if 60 transgenic fish bred in a population of 60,000 wild fish, the wild fish would be extinct in 40 generations.

“We’ve seen assurances in the past from industry and regulators that there won’t be catastrophic consequences like the Gulf oil spill,” said George Kimbrell, a senior staff attorney for the Center for Food Safety. “We have a cultural amnesia about these things.”

No one gets excited at a genetically raised fish. Why put a different genetic makeup into your body? Some scientists don’t see it this way.

AquaBounty, which calls its super salmon an “advanced hybrid” rather than a transgenic fish, said the fish are safe to eat and would be raised in contained farming operations that could be based inland rather than along coastal waters. And the modified fish, all females, would be sterile so that they couldn’t breed with wild fish if any escaped, the company said.

AquaBounty’s fish grow faster but not bigger than normal Atlantic salmon. The company says that genetically modified salmon are identical to regular salmon in every way except for the genes that have been added.

The difference between males and females is the Y chromosome. The company has added a growth hormone gene from the Chinook salmon as well as a gene from the ocean pout, a distant relative of the salmon, to a normal Atlantic salmon’s roughly 40,000 genes. Salmon normally feed only during the spring and summer, but when the on-switch from the pout’s gene is triggered, they eat year round.

We have another oil-rig-like catastrophe waiting to happen in our oceans.

The result is a transgenic salmon that grows to market size in about half the time as a normal salmon – 16 to 18 months, rather than three years.

The FDA doesn’t comment on pending applications, though a public hearing on the AquaBounty application could come as early as this fall. Such public hearings can signal the FDA is close to a decision.

How many times has the FDA’s decisions affected the lives of millions of people?

There have been no independent, long-term scientific studies of AquaBounty’s patented salmon. The human health impacts of GMO salmon are not known. The FDA has relied on scant scientific documents provided by AquaBounty itself. In fact, some of the FDA’s own assessment of AquaBounty’s studies to determine whether GMO salmon are safe for human consumption states that the studies contain “technical flaws” and provide “insufficient data.”

For two of the studies submitted, AquaBounty used sample sizes so small that they have no scientific credibility, with only 12 fish tested for one study, while another study on possible allergic reactions in humans involved only 6 fish.

Still, the FDA is currently on the verge of approving the company’s GMO salmon.

What will happen to people who eat the engineered fish over time? How far can genetically manipulated traits impact human health?

Once approved, AquaBounty said it could start marketing the eggs from transgenic salmon within two or three years. The company also is reportedly developing transgenic tilapia and trout. Ask for it in your favorite restaurant.

Once again, unknowing humans will be tested and the product in question will be recalled after many ill effects on humans. But in this case, genetically modified organisms can’t be recalled from the wild.

In 2014, we reported that the two largest national grocery stores, Kroger and Safeway, had announced that they would not sell the salmon should it receive FDA approval. I sure hope that they hold fast to this.

Kroger is the largest grocery chain in the United states, with 2,424 stores nationwide. Safeway follows in second place with 1,406 stores. Many other grocers have publicly stated that they will not sell Frankensalmon, including Target, Meijer, Giant Eagle, Marsh and H-E-B. Three of the first retailers to refuse the salmon were Whole Foods, Trader Joe’s and Aldi, who announced their decisions in July 2013.

To date, over 60 different food retailers have taken a stand against selling GM salmon, totaling over 9,000 stores across the U.S. Additionally, millions of people have protested the FDA’s consideration of the salmon in writing.

The FDA has cotton in its ears

It’s astounding to me that the FDA could turn such a deaf ear to the cries from environmentalists, health officials, researchers and consumer groups. The research just isn’t there to bring any assurance that these monster fish are safe. No one knows the long-term impact of eating genetically modified fish on human health. However, once again… common sense has evaded the FDA — this time in a massive way.

A glimmer of hope: The Center for Food Safety has not let any grass grow under its feet — it has announced it would file a lawsuit challenging the approval. 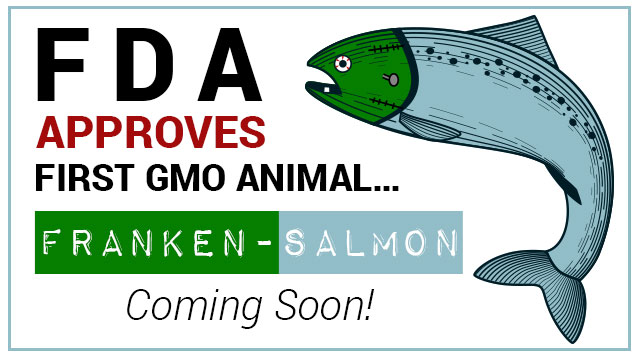 There are currently at least 35 other species of GM fish in various stages of engineering — and this is a truly disturbing fact for many people who do not want GMOs in circulation, especially if they are not labeled.

I believe in Creation… I believe that the natural world was created and that our job is to be stewards of this Creation. However, we continue to mess where we don’t belong, impose our so-called advanced and “good” technology for the betterment of mankind.

If we just left things the way they were meant to be, cared for the land, cared for the plants, cared for the animals, and stopped exploiting the Earth for our desire to be bigger, better and wealthier… we would have enough for everyone. But… we want more and more. Our greedy tendencies drive the desire to rule over a Creation that was made to work harmoniously in partnership with us, to keep delicate ecosystems balanced and humankind healthy.

Why does anyone even think that raping Creation will yield anything more than trouble?

It’s time for the FDA to pull its head out of the sand and do the job it is called to do!