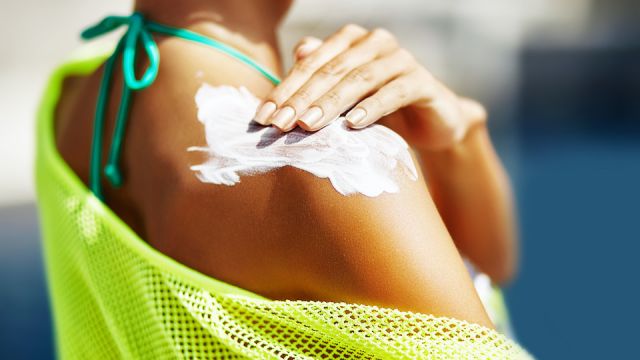 Just like food, it’s important to read the ingredients of all our skincare products. Our skin is extremely absorbent, and anything we put on it enters our bloodstream. This is especially true when it comes to sunscreen; we apply it generously all over our faces and bodies and reapply often. When you believe you’re protecting yourself from the sun, could you really be smearing on toxic chemicals?

Check your sunscreen label for these toxic chemicals

Skin cancer is a common problem affecting over 3 million Americans each year, and using sunscreen is thought to help prevent the UV radiation that leads to skin cancer. However, recent research has flagged new concerns with sunscreen ingredients, causing experts to question whether the benefits of sunscreen outweigh the risks.

In 2019 and 2020, the Food & Drug Administration (FDA) published two studies showing that many common sunscreen ingredients are absorbed into the body after a single use, and could be detected on the skin and in the blood weeks after application ended.

The most worrisome of these is oxybenzone. This ingredient penetrates the skin and is used to help other chemicals penetrate the skin. The Centers for Disease Control and Prevention (CDC) have routinely detected oxybenzone in more than 96 percent of Americans, and study participants who reported using sunscreen have higher oxybenzone exposures. Although oxybenzone is very effective at reducing UV exposure, it is also classified as a hazardous irritant for eye contact and the potential cause of allergic skin reactions. In lab studies, oxybenzone has been found to interfere with hormones, imitating estrogen, and blocking the function of testosterone. Oxybenzone is also harmful to aquatic life. This chemical is so detrimental that in 2018, Hawaii banned it to protect coral reefs.

Many other sunscreen ingredients are also being re-examined for safety concerns. Most products typically include a combination of two to six of the following active ingredients: oxybenzone, avobenzone, octisalate, octocrylene, homosalate, and octinoxate. A 2010 study of Swiss mothers found at least one of these sunscreen chemicals in 85 percent of milk samples, which shows how much these toxins can be stored in the body and then be transmitted to babies. Although studies are ongoing, there are many signs that these chemicals can cause damage to your health.

How toxic sunscreen ingredients could harm your body

Smearing on toxic sunscreen could cause many subtle health effects, especially with continued use over time.

Several common chemical sunscreen ingredients appear to be endocrine disruptors. This means that they affect hormonal systems, which is a major problem, considering that our bodies are run by a network of hormones and glands that regulate everything we do. Ingredients such as oxybenzone, octinoxate, and homosalate have been shown to cause hormonal effects such as altered estrogen cycles in mice, and disrupted calcium signaling in male sperm cells.

A team of researchers at the National Institutes of Health have suggested a link between higher concentrations of benzophenones found in sunscreen and poorer reproductive success in men seeking assistance at a fertility clinic. Men with greater exposures to benzophenone-2 and 4-hydroxyoxybenzone had poorer sperm quality and reported that it took longer for their partners to conceive. Female exposures to oxybenzone and related chemicals have been linked to increased risk of endometriosis.

Parabens are used as preservatives in sunscreens and can be hard to identify because they go by many names on the ingredients list. Look for names including the word ‘paraben’ or ‘hydroxybenzoate’ – these are parabens in disguise. There are many reasons to avoid parabens – they disrupt hormones, induce allergic reactions, interfere with reproductive and developmental health, and are associated with breast cancer.

Another very common ingredient in FDA-approved chemical-based sunscreens is avobenzone. This chemical photodegrades with exposure to sunlight, leaving free radicals in the skin and increasing the risk of skin cancer.

Damaging to the brain

Methylisothiazolinone is a widely used and very effective preservative in sunscreens. Unfortunately, animal studies suggest that it is toxic to the brain and nervous system and can interfere with neural development, causing increased susceptibility to seizures.

Which sunscreen ingredients are safe?

There is a mounting pile of evidence pointing to the harmful effects of chemical sunscreen ingredients. So which sunscreens are safe? The recent FDA research gave the “generally recognized as safe and effective” (GRASE) designation to just two active sunscreen ingredients: zinc oxide and titanium dioxide.

If you’re worried about sunscreen, remember to practice sun safety by covering up with clothing, wearing a broad-brimmed hat, and seeking the shade or staying indoors between 10 a.m. and 4 p.m. Enjoying a safe amount of sun and skipping the toxic sunscreen will help you have a healthier, happier summer.