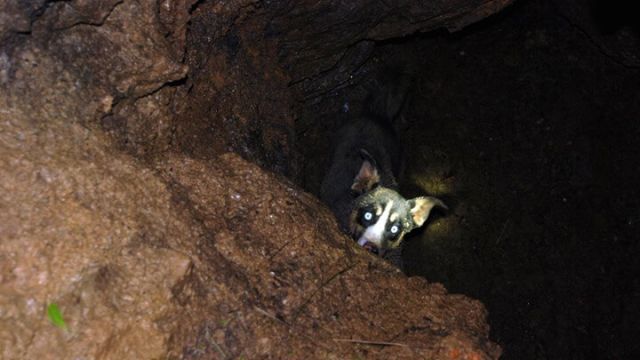 Recently the volunteer fire department in Fallowfield Township, Pa., came to the rescue of a dog stuck in a 30-foot deep sinkhole, which was part of a former mineshaft. A neighbor heard the dog barking, went to investigate and called the authorities. The dog, Blaze, was reunited with his family, who had thought they would never see their beloved pooch again.

Along with the fire department, the county’s animal rescue team participated in the planning of the operation to get the dog out of the sinkhole. Some firefighters volunteered to go down into the sinkhole and rescue the dog but were overruled because the risk of soil collapse was too great. The team decided to use a rope, and, according to a Facebook post, “With some good thinking and strong will — and the proper tools — crews were able to sling the dog and extricate from the hole/shaft.” Blaze was eager to get out of his predicament and worked with his rescuers to get back to surface by nighttime.

The dog was missing for almost two weeks, and the owner feared Blaze was never coming back. Heather Ross, Blaze’s owner, saw a Facebook post about the trapped canine. She hoped it was her dog, and it turned out she was right. Ross lives in Charleroi, a town bordering Fallowfield in southwest Pennsylvania. Blaze was several miles from home when he ended up in the sinkhole.

Blaze, who boasts bright blue eyes and the white facial marking that may have inspired his name, looks like an Australian cattle dog or cattle dog mix.

An appointment with the vet

Blaze is scheduled for a vet visit. He’s been sick since he returned to his family, and they don’t know whether his illness is connected to the time spent in the sinkhole. There’s nothing wrong with him externally except for some “scruffing” on his nose.

Sinkholes are fairly common in the Keystone State. Blaze was indeed a lucky dog, as he could have fallen into a hole far away from people and never been found. Technically, a sinkhole is a deep hole in the ground with no external natural drainage. Rain stays within the sinkhole, with the water eventually moving into the subsurface. A heavy rainstorm during his time in the sinkhole would likely have drowned Blaze.

The Pennsylvania Department of Conservation and Natural Resources calls “sinkholes, along with caves, a definitive part of the Pennsylvania landscape we call karst.” They are common in areas with bedrock of limestone or dolostone. Fracking, or the practice of injecting liquid at high pressure into the earth to force open fissures and obtain oil or natural gas, is common in Pennsylvania and can lead to sinkhole formation.

Although there are now electronic GPS pet trackers available, they have limited use. You can only track your lost pet via your phone if he is relatively close to you. That wouldn’t have worked for Blaze, but he had an old-fashioned caring community of volunteers to save him.