Kefir is more than just a health fad; it’s thought to be a healthier and more powerful version of yogurt. Originating from Eastern Europe and Southwest Asia, kefir is a fermented drink made traditionally from cow’s milk or goat’s milk. Kefir is a fantastic source of nutrients and friendly bacteria, which are extremely beneficial for digestion and gut health. It may also help with weight management and mental health.

This potent probiotic is made by adding kefir “grains” to milk. But these are not typical grains. They’re actually cultures of yeast and lactic acid bacteria that resemble cauliflower. Over a period of 24 hours, the microorganisms in the grains multiply and ferment the sugars in the milk, turning it into kefir.

When ingested, the probiotics in kefir help manage the gut microbiota. Kefir grains contain approximately 30 strains of bacteria and yeasts, making it a rich and diverse probiotic source. The probiotic Lactobacillus kefiri is unique to kefir, and studies suggest that this particular probiotic may inhibit the growth of harmful bacteria such as Salmonella, Helicobacter pylori and E. coli.

Koreans love their spicy condiment called kimchi. This traditional tasty and highly functional Korean delicacy is made by fermenting vegetables with probiotic lactic acid bacteria. Along with the main cruciferous vegetables, other ingredients are added, such as garlic, ginger, red chili peppers and spices. Kimchi is typically served with steamed rice at every Korean meal, helping keep various ailments at bay. It’s loaded in nutrients, but its biggest benefit may come from the “healthy bacteria” called Lactobacillus.

Based on research from the Department of Food Science and Nutrition at Pusan National University in South Korea, kimchi is said to contain anticancer and anti-obesity properties. It is also believed to promote regularity, colorectal health and cholesterol reduction. In addition, researchers suggest kimchi has antioxidative and anti-aging properties, and promotes brain health, immune function and skin health.

Kombucha is quickly gaining popularity as a beverage that promotes gut health. Kombucha is a fermented tea made by adding a culture of bacteria and yeast, sugar or fruit juice, and other flavorings.

It’s often referred to as “mushroom tea” since the bacteria and yeast grow into a mass that resembles a mushroom cap during the brewing process. You might see small remnants of the bacterial mix floating in a bottle of kombucha, which may seem unappealing, but is actually not much different from the sediment in your wine bottle.

However, here’s the thing, many manufacturers sell it pasteurized. While kombucha is rich in good gut bacteria, like those you find in other fermented foods, the probiotics don’t survive the pasteurization process. On the other hand, drinking kombucha unpasteurized may pose a food safety threat, especially for pregnant women or people with compromised immune systems. So, only drink unpasteurized kombucha if you are certain it was correctly brewed from a reputable manufacturer.

The sauerkraut you pile on your sausages contains a good number of healthy, gut-friendly bacteria. That’s right, kimchi’s German cousin, sauerkraut — another fermented cabbage — is much more than a tart condiment. It’s a powerhouse of nutrition full of live cultures such as Lactobacillus bacteria.

The probiotic count of store-bought sauerkraut doesn’t compare to home-brewed versions, however. Sauerkraut found at the store usually contains only one or two different strains that are thought to be helpful. Raw sauerkraut, on the other hand, can contain over 13 different species of gut-friendly bacteria, suggests a study published in the December 2007 issue of Applied and Environmental Microbiology. So get out your mason jars and make your own.

Miso, a seasoning paste made from fermented soybeans and barley or rice malt, is found in most Japanese kitchens and restaurants that serve miso soup alongside bento. Depending on processing and fermentation methods, some soy miso may contain “friendly” bacteria, including various species of Lactobacillus, which support intestinal microflora. In addition, research published in the Journal of Toxicologic Pathology showed that miso was effective in the suppression of lung tumors and breast tumors in rats, as well as liver tumors in mice.

Most of the nutrients we get from fermented soy miso depends on the microorganisms used in fermentation. Bacillus subtilis is an important bacteria, and it is more commonly used in fermentation of Chinese miso rather than in the Japanese version. Bacillus bacteria is important because of its ability to create a form of vitamin K called menaquinone-7.

Vitamin K is essential for bone health and is associated with decreased risk of osteoporosis, since this vitamin helps maintain bone mineral density and shape bone structure.

But like most probiotic foods, miso should only be added to soups just prior to removing it from heat. This preserves the live cultures and retains as much nutrients as possible.

Tempeh, another probiotic food, originates from Indonesia, and is derived from fermented soybeans. It has a nutty taste and a texture similar to meat, making it a good protein for plant-based diets. Rhizopus oligosporus used in the fermentation process produces a type of antibiotic that is effective against certain bacteria, including Staphylococcus aureus, which causes pneumonia and sepsis. This natural antibiotic is also heat resistant and can withstand a wide range of pH levels.

Similar to miso, the protein in tempeh becomes more digestible after it is broken down by bacteria or mold. In addition, since tempeh is not salted, it is suitable for most low-sodium diets.

There are many ways to get good bacteria from your food, but yogurt is definitely one of the most popular. While many people eat yogurt as a source of probiotics, the problem is most commercial yogurts are pasteurized after the fermentation process, killing off the good bacteria. Additionally, many yogurts are loaded with sugar, artificial sweeteners and fillers — not very beneficial for gut health.

The National Yogurt Association (NYA) has developed a “Live & Active Cultures” seal for yogurt packaging. The seal signifies that the yogurt contains at least 100 million cultures per gram or 20 billion per eight-ounce serving. However, keep in mind that just because the cultures are live doesn’t necessarily mean they are active.

Live and active cultures refer to the living organisms Lactobacillus bulgaricus and Streptococcus thermophilus. These cultures convert pasteurized milk to yogurt during fermentation. All yogurts are required by law to be made with these two cultures. But what you need to know about your gut-healthy yogurt is whether the milk was pasteurized before or after the fermentation process. If added before pasteurization, then the heat will have killed all of the probiotics. So, for optimum health benefits, choose a plain yogurt that has the NYA seal. And look for added fiber, since these are prebiotics that feed the probiotic bacteria. 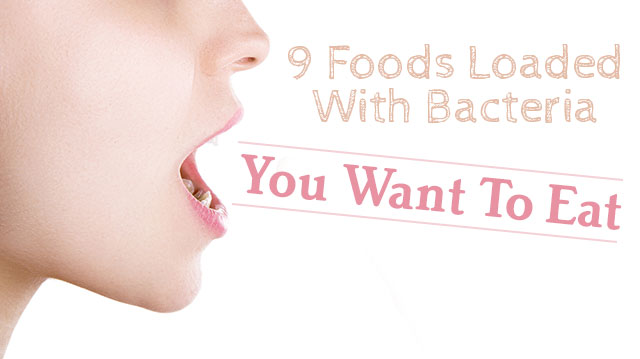 Green peas are a more recent probiotic discovery. In 2013, Japanese researchers published a preliminary study in the Journal of Applied Microbiology suggesting that green peas contain a strain of probiotic bacteria with high Immunoglobulin A (IgA)-inducing ability in animals. So, what can this do for us?

Leuconostoc mesenteroides, the good bacteria in green peas, may raise the level of IgA antibodies in your immune system. These antibodies are often found in the lining of your airway and digestive tract and can help fight off infections and colds thanks to their inherent probiotic bacteria. Again, like most probiotics, heat can kill live probiotics. So, instead of cooking, simply add raw peas to your salad.

This is definitely a food you want to eat. Apparently, dark chocolate could be your new source for probiotics. Manufacturers are able to add probiotics to dark chocolate using low processing temperatures to keep them intact — and up to four times the amount found in other forms of dairy.

In a 2010 study published in the International Journal of Food Microbiology, researchers found that probiotics in dark chocolate survived the passage through the stomach and small intestine better than those added to liquid milk (91 to 80 percent versus 20 to 31 percent). As if you needed another reason to eat chocolate.