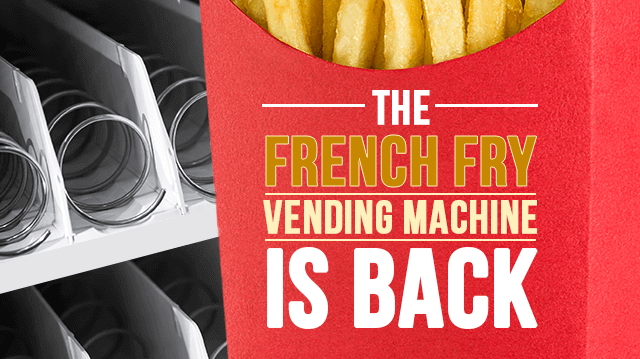 How would you like to throw a few coins into a vending machine, wait 90 seconds and end up with a serving of hot french fries? We here, at The Alternative Daily were blown away by this “brand-new” invention by students at the Wageningen University in the Netherlands. Automated dining has reached a new level.

No human interaction needed. The prototype of this fancy machine sits on the university campus, and it has the ability to deep-fry frozen french fries into crunchy, hot fries in less than two minutes. Developers love the idea of this new money maker and are talking about building lots more of these machines to sell around the world.

The question is, will it work? A little bit of digging around has shown that some version of this machine has been around since the early 1980s when Mr. French Fry was debuted on the Australian market. For about 10 years Mr. French Fry offered hot fries to customers, but by 1992 it disappeared and the company closed.

Years later, Robo french fry machine popped on the market, and according to an article from 2013, several machines were already shipped to countries like Chile, Iran and Croatia. The machine was supposedly so popular that The New York Times excitedly called it the Rolls Royce of vending machines.

However, as we look around, we cannot help but wonder what happened to Robo. There have been no reports about its appearance around the country or its effectiveness. We have to ask ourselves, are the fries any good? Or are people simply loving the idea of human interaction?

Related: Why You Should Stop Loving Fast Food French Fries

Moreover, there are a few other things to consider when it comes to this invention:

What oil is used in the machine to fry up french fries? It would have to be cheap and last a long time. The truth is, most fast food chains use vegetable oils like corn, soybean, canola or cottonseed.

They may be cheap, but they are certainly not ideal for frying anything — these oils are not stable and oxidize easily. Oxidation can cause harm to brain cells and has been linked (in animals) to diabetes, inflammation, and as a result cardiovascular disease. 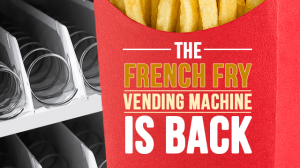 In the case of Robo, the french fry vending machine has to be maintained the same way it would in a fast food restaurant, and according to a company statement, it only serves 150 portions per day.

Do you really want to be in a rush when eating? We’ve stressed this before: Eating should happen in a parasympathetic state, meaning, you want to sit down, take your time and give your body the chance to properly digest your food.

Vending machines make it easy to disregard this advice and to eat on the go. That said, of course we know you can’t always sit down for a fancy meal, and we’re sure your body will forgive you if you indulge in such a treat occasionally.

Read: Stop Eating French Fries: Replace Them with These

It remains to be seen if Robo or other french fry vending machines will be able to celebrate fame and fortune soon. In the meantime, we suggest a serving of homemade sweet potato fries, baked to perfection in your oven at 400°F for 30 minutes.