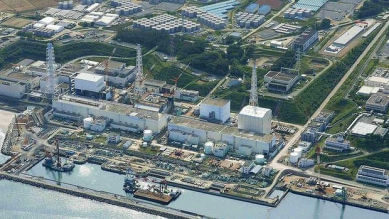 While the situation at Japan’s Fukushima nuclear power plant is not quite as volatile as it was, things are still messy, not to mention dangerous.

The Fukushima power plant experienced a triple nuclear meltdown, along with hydrogen explosions, after the earthquake and tsunami of 2011. Since then, the Tokyo Electric Power Company, also known as Tepco, has been trying to contain the 300 metric tons of radioactive water that were discovered leaking from the plant into the ocean.

Last Tuesday, four metric tons of rainwater containing ‘relatively low levels’ of radiation – 160 becquerels per liter – leaked from a holding tank during a transfer. This water was being used to pour over reactors to keep them cool – a project that has been requiring a massive amount of water.

Heavy rainfall was causing one of the tanks containing the water to overflow, which was the reason it was being transferred to another tank, when the spill occurred. Japan is gearing up for another storm from the south, and is expecting more heavy rains, which may flood the tanks further.

In other Fukushima news, fisherman are out on the water again performing trial runs off of the northern Fukushima Prefecture, since September 25. 100 sample fish were tested for radiation, and results showed that 95 of the fish were free of radiation, while five of the fish showed radiation levels less than one tenth of Japan’s ‘safe limit’ of 100 becquerels per kilogram for food products.

Eleven varieties of fish caught during these trial runs are now on sale at the Matsukawaura Port in Soma. While these levels of radiation are considered safe by the Japanese government, it is still troubling that radioactive fish are to appear on people’s dinner plates. Understandably, fisherman are concerned that they will not see much revenue from the sales of these fish.

The Fukushima situation sheds a lot of light on the grave repercussions of the world’s use of nuclear energy. We hope the situation there sees significant improvements in the near future.