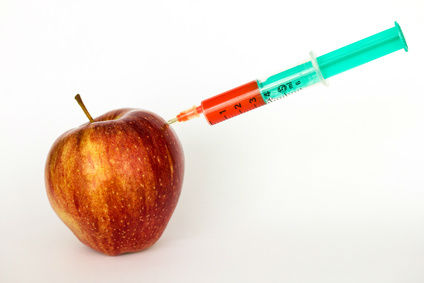 The latest GMO up for approval by the US Department of Agriculture (USDA) is the “Arctic Apple,” also known in some circles as “Frankenapple.” The modification? This apple has had its genes modified so that it does not oxidize and turn brown when sliced.

If this sounds to you like a pretty useless result for over a decade of work and millions of dollars in funding, you’re not alone. Neal Carter, the president of Okanagan Specialty Fruits (OSF), hopes that his apples will appeal to parents whose children crinkle their noses at a sight of a brown apple slice, and also to food service companies who package pre-sliced apples.

As an aside, the fact that some of us are disgusted by a slightly brown apple (in children it may be understandable, but in adults, not so much), a completely natural process, and choose not to spare the extra five seconds that it takes to slice our own apples, simply goes to show how far our society has separated itself from nature.

Frankenapple is awaiting approval by the USDA sometime this year. The first varieties scheduled to be released are Golden Delicious and Granny Smith, although Carter states that OSF is working on Fuji and Gala apples, as well.

He also announced that his company wishes to apply similar technology to cherries, peaches and pears. Test crops of the apples can currently be found growing across several acres in New York and Washington states.

A public comment period regarding the apple is currently open, and, encouragingly, there has been a great deal of outspoken opposition to its approval. Many apple producers are worried that the release of a GMO apple will affect the apple’s reputation as a nutritious, natural food. Lucy Sharratt, the coordinator of the Canadian Biotechnology Action Network, agrees, and says that this move will turn the apple into an “industrialized product sold in plastic bags.”

Frankenapple is created by double strand RNA (dsRNA) technology, a largely untested process of doubling a gene that is already found in the apple, one that causes it to oxidise. This effectively nullifies all of these genes, causing the apple to stop producing the enzyme that reacts to oxygen and turns it brown.

According to the Organic Consumers Association (OCA), this may cause health problems, as (although the biotech industry denies this claim), the altered RNA will be introduced into our circulatory and digestive systems.

The OCA cites several professors from universities around the world that have posited risks of ingesting these apples, and who are urging that the technology be tested as to its effects on human health before the apple is approved, not after.

This seems like simple common sense, but is not what is being done. There has also been some speculation that the dsRNA entering the human body can influence multiple organ systems at a cellular level.

The OCA also points to the finding that non-organic apples already have over 42 pesticides sprayed onto them, placing them on the Environmental Working Group’s ‘Dirty Dozen’ lists year after year. As the enzyme that the new technology shuts down also helps the apple fight off insects, it is possible that it could lead to even more pesticide use.

Neal Carter and his fellow researchers recently held focus groups in four US cities, asking consumers if they would buy the apple. He states, “typically, it’s about 80-20. Eighty percent say, ‘Fantastic, bring it on.’ And 20 percent say, ‘Hmm. I don’t think I like genetic engineering.’ But they all eat it.

Even if they were a naysayer that was never going to eat any GM fruit, they will eat a slice. It’s not like we have to ask them to eat a slice. They will ask if they can eat a slice.”