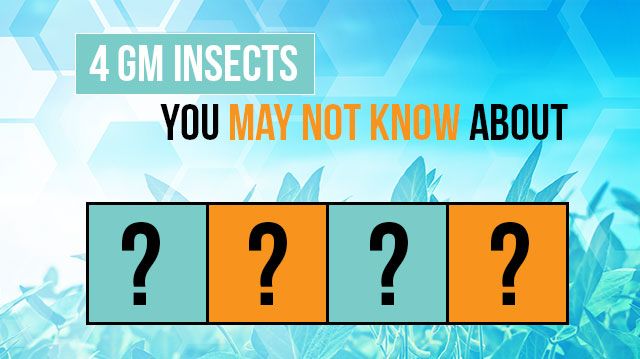 When it comes to genetic modification, more and more people across the United States — and across the world — are voicing their concerns over its effect on our food supply. After all, we don’t know what long-term effects GMOs will have on our health or our planet.

However, genetically modified foods aren’t the only GMOs that are being developed and released into our environment. Biotechnology firms are also developing GM insects, and some of these insects have already been field-tested in regions in the US, and around the world.

The following are four types of GM insects you may not have heard of:

This is perhaps the most well-known group of GM insects out there. The main purpose of these mosquitoes is to interact with wild mosquito populations to combat infectious diseases, such as dengue fever, malaria, and zika.

Some GM mosquitoes have already been released into the environment during field trials in the Cayman Islands, Brazil, Panama, and Malaysia.

Diamondback moths, also known as cabbage moths, are modified in a similar way to GM mosquitoes. The offspring is “programmed” to die at an early stage of development, so that the moths do not reach adulthood. As these moths feed on cabbage, Oxitec, the biotech firm that has developed the moths, hopes to reduce their numbers.

As some pests have become increasingly resistant to the toxins in GM crops over the last couple of years, Oxitec’s mission is to “pair” these insects with their GM crops.

Oxitec developed these moths because pests such as the pink bollworm moth are becoming increasingly resistant to the Bt toxin, used in genetically modified cotton and corn.

GM honeybees — in the works

Since researchers completed the sequencing of the honeybee genome in 2006, the genome has been studied for more information on Colony Collapse Disorder. In 2011, Scott Cornman, a US Department of Agriculture geneticist, told Nature News that they were in the “discovery phase.” One possible implication of this research is the genetic modification of honeybees to be more resistant to pathogens and other threats.

A cause for concern

One major problem with the genetic modification of insects is that there are no specific regulations for this process, according to the nonprofit advocacy group GeneWatch UK. In the European Union, guidelines for GM insects mirror those for GM food. Furthermore, GeneWatch UK wrote:

“Under the Cartegena Protocol on Biosafety, when exporting GM insect eggs for open release to other countries, Oxitec is supposed to supply a risk assessment that meets EU standards and to copy this to the EU and UK authorities so it can be made publicly available. Oxitec has not followed this process correctly for any of its exports to date.”

Also, in an article entitled “The Danger of Genetically Modified Mosquitoes,” Helen Wallace, the director of GeneWatch UK, discusses a number of concerns with releasing GM mosquitoes into the wild. These include:

“… allergies and irritation; the presence of live female mosquitoes; potential changes in the ability of mosquitoes to transmit disease; and accidental ingestion (including of larvae and eggs)… the potential for viruses to evolve into more virulent forms; the impacts on human immunity and hence cases of disease; whether other species of mosquito (transmitting the same or different diseases) might occupy the ecological niche vacated by a falling population of the target species; and whether infection with dengue has a protective effect against yellow fever.”

These are some troubling concerns, indeed. Wallace adds:

“Decisions appear to be being taken by a small circle of powerful investors who have decided they must rush to commercialize a particular technology, rather than in consultation with the people who will be affected. Who is going to be liable if anything goes wrong? And will any problems be reversible as releases happen on an ever larger scale?”

There are so many unknowns, it’s frightening. In the case of the honeybee, one of our most important pollinators, if things go wrong and the species is further damaged, humans could be in for a world of hurt. While it would be wonderful to eradicate dengue fever, malaria, and zika, are these GM mosquitoes the way to accomplish this? If so, will it be accomplished safely?

In the case of GM insects, what we don’t know may hurt us.