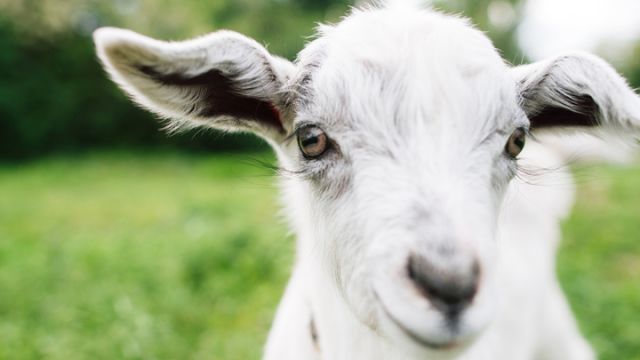 It seems that goats aren’t that much different than domesticated dogs when it comes to asking humans for help. In fact, according to research, domesticated goats are experts in eye contact and look at nearby humans when they need a hand.

Animal psychologists at Queen Mary University of London challenged 34 goats with an unsolvable problem of retrieving food from a sealed plastic container.

A plastic container was placed in a pen along with a human observer. The observer sat facing the wall or looking into the pen. Goats were then brought into the pen for evaluation. When the human was turned away from the goat, it simply looked at the box. But when the human sat facing the goat, it looked at the human for help by making eye contact for two to three seconds before turning back to the plastic container.

Another study published in Science found that mutual gazing between dogs and humans keep us connected. Research suggests that staring at your pup — or pet goat — increases oxytocin levels for both the human and the animal. Oxytocin is involved in social recognition and bonding says Psych Central. More oxycontin means less stress. But wolves, who rarely engage in eye contact with their human handlers, seem resistant to this effect suggests the study.

The research published in the journal Biology Letters concludes that when goats are raised as companion animals their brains change to communicate with humans in the same way a domesticated dog would look to a human inquisitively for help. The eye contact is noteworthy, since it’s a trait that’s only been observed in a few other domesticated animals such as dogs and horses. This means that even when goats are domesticated as livestock, they react with humans in the same way a companion animal might. So, the next time you find yourself locked in a mutual gaze with a goat, he could be asking you for a little help.