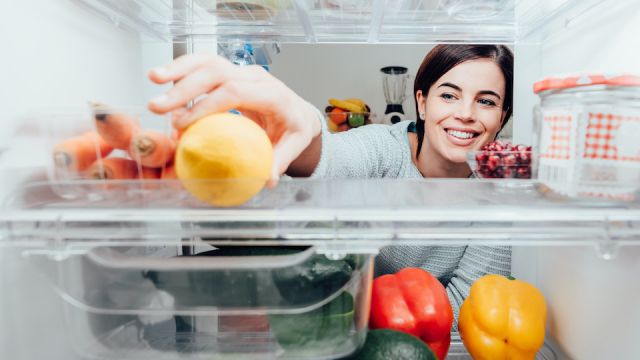 Cleaning out your refrigerator goes way beyond wiping up spills and throwing out slimy veggies. It’s time to unburden yourself of expired foods that no longer serve any purpose in your life. It doesn’t matter how frugal you are; there’s no reason to be holding onto last summer’s jar of homemade barbecue sauce. Now is the time for the great refrigerator cleanout. Here’s what you should keep and what you need to toss asap!

Preparing for the big purge

Cleaning out your refrigerator doesn’t involve anything too fancy, but it does require gathering a few items to help make the process easier. Even if what’s inside your fridge freaks you out, there’s no reason to panic. With the right tools and a little elbow grease, cleanup and purging become a breeze. Here’s what you need to get the job done:

Begin by removing everything

Out with the old and in with the new

The refrigerator is one of the most important appliances in the kitchen for keeping foods safe. Bacteria are everywhere in life. Although refrigeration slows bacterial growth, it doesn’t mean your food will remain fresh forever. In fact, under the right circumstances, bacteria can grow rapidly, snowballing to the point where some types can even make you sick. According to the USDA, there could be a couple of bacteria lurking in your fridge: Spoilage bacteria that cause foods to rot and develop smelly odors, bad tastes, and slimy textures, and pathogenic bacteria that cause foodborne illness.

The temperature in your refrigerator should be set at 40 °F or lower so that any place you store food is safe. Of course, some foods naturally retain a longer shelf “life” in the refrigerator. In fact, some foods may even last past their expiration date, if stored properly. Vegetables and fruit require different humidity conditions. Vegetables should be stored in higher humidity, while fruit should be kept at lower humidity. Some crispers come with controls that allow you to customize each drawer’s humidity level. According to the Foodsafety.gov, here’s what to keep. As for the rest — start tossing!

Toss — Any moldy or rotten foods

This is a no brainer. If you’re looking at mold, toss it out. Even if it looks ok, but smells bad — toss it out. Remember, mold is microscopic and lives on animal and plant matter. Some molds may cause respiratory problems and allergic reactions suggest the USDA. Other molds, under the right conditions, create “mycotoxins,” poisonous substances that can make you and your family ill.

Fruits and veggies that are not mushy and have retained firmness are a keeper.

Toss any vegetables that are sticky or slimy. This indicates that your veggies have developed a nasty film of bacteria.

Keep — Balsamic and other vinegar

Traditional balsamic vinegar is like wine; it gets better with age. That means, if stored properly, it could last decades in the cupboard unopened, and years in the fridge, once opened. Keep in mind, though, that fake versions, made quickly in manufacturing plants, don’t age as well but still last a long while in the fridge. In fact, all kinds of vinegar retain a more consistent flavor when kept in the refrigerator.

Here’s the thing about chicken stock; it only stays fresh in the fridge for one to two days, according to the FDA. So, if you don’t want it to go to waste, either freeze it in an ice cube tray for later use or toss it.

When opened, packaged dried fruit should be stored in the fridge, where it will last for a few months or even up to a year.

Storing whole oranges in the fridge will extend their life for up to two months. But when your oranges are past their prime, they become soft and develop a white mold. Toss!

Unlike soft cheeses, hard cheeses, such as colby, swiss, cheddar, parmesan, grated parmesan, provolone, Romano, grated Romano, and processed cheeses can last much longer.  Generally, the harder the cheese, the longer it will last in the fridge. Firmer cheeses like cheddar will stay fresh for about four to six months when unopened and three to four weeks once opened. Even harder cheeses like Pecorino or Parmesan will remain fresh for up to nine months unopened and four to six weeks once opened.

Soft cheeses, moldy and past their prime, such as, brie, blue, camembert, cottage cheese, cream cheese, edam, ricotta, Monterey Jack, mozzarella, Muenster, Neufchatel, and Roquefort should be tossed. The same goes for any shredded, sliced, or crumbled cheese. Mold naturally threads throughout cheese, tainting more than you actually see. Furthermore, nasty and harmful bacteria, such as E. coli, listeria, brucella, and salmonella, can grow alongside the mold.

Almond and coconut flour should be stored in the fridge — regardless of the package being opened or not. Cooler temps reduce the risk of rancidity and oxidation. However, it’s highly recommended to transfer each flour into an airtight container after opening.

Depending on the leftover, whether it’s roast beef or pasta, each has its own shelf “life” in your refrigerator.  But if you can’t remember if it was left over from last week or last month, then get rid of it. Foodborne illness is caused by harmful microorganisms, such as bacteria, breeding in contaminated food. But since bacteria typically don’t change the smell, taste, or look of leftovers, you can’t really tell whether food will make you ill. The rule of thumb? Keep leftovers, three to four days. If you don’t eat it during this time — toss it.

Most people have a hoard of half-used condiments hanging around in the fridge. That BBQ sauce from last summer should be tossed. So too should any expired condiments. Hey, if they’re still hanging around a year later, you probably didn’t like them that much anyway.

Most of us are guilty of keeping condiments and sauces in the fridge well after they’ve expired. Here’s the thing, if you’ve discovered after your great refrigerator cleanout that you’ve had to throw out far more than you kept, grab a permanent marker and start marking expiry dates on lids and glass to keep yourself more self-aware. Happy purging!