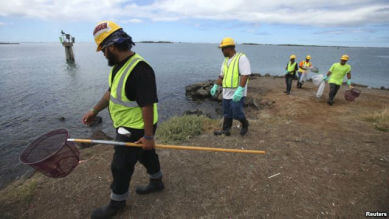 According to the Los Angeles times, the Hawaii Department of Health said thousands of fish have already suffocated and died due to the massive molasses spill that occurred early last week. Officials have said the 233,000-gallon spill was the result of a leaking pipe in the Honolulu Harbor. The horrific event is being called the largest marine disaster in the state’s history.

Here is a timeline of the events that have unfolded since the arrival of the ship, the SS Maui Matson, into the harbor on Saturday, September 7, 2013.

– Sept. 8: On Sunday at 10 a.m., the transfer is complete with no problems indicated.

– Sept. 9: Less than 24 hours later, there are reports of an unusual substance in the water; that afternoon, an environmental inspector arrives for inspections. That day, dead fish and other marine life began washing ashore.

– Sept. 10: By the middle of the day on Tuesday, the leak is discovered near one of the harbor’s piers. Officials said as much as 1,400 tons of molasses may have entered the harbor.

– Sept. 11: The public was advised not to enter the ocean if they notice the water has a brown color. The Department of Health said in the statement that the “nutrient-rich liquid could also cause unusual growth in marine algae, stimulate an increase in harmful bacteria and trigger other environmental impacts.”

Additionally, they stated that the substance was contaminating much of the Honolulu Harbor and Keehi Lagoon, noting, “It oozed out of a pipe that normally connects storage tanks to ships, but thanks to a hole in the pipe’s side, it released a plume of the sticky, brown substance across the seabed, smothering thousands of tropical fish, eels and crabs in a sugary death.” Officials warned locals that the thousands of dead fish could also attract more hungry sharks and barracuda.

– Sept. 13: At a news conference held on early Friday at the harbor, Gary Gill, deputy director of the Hawaii Department of Health, told reporters, Our best advice as of this morning is to let nature take its course.” The AP also reported that a senior executive for Matson Navigation Co., the company that maintained the faulty pipe, said the firm was taking responsibility “but hadn’t planned ahead of time for the possibility of a spill.”

– Sept. 14: On Saturday, reporters and cameramen boarded a boat to take a tour of the marine disaster. It was organized by the Hawaii Department of Health in order to provide journalists with a sense of the magnitude of the disaster in addition to clearing up possible falsities about the spill and response efforts.

Response crews stated that the damage was subsiding, but it was abundantly clear to all involved that a better regulatory framework must be put in place to ensure that similar accidents don’t occur in the future.

Both the state and federal governments must find a better way to regulate the shipment of molasses. The Huffington Post notes that it’s still unclear as to how closely Matson monitors its pipelines. Its safety manager was also on the tour, and stated he “wasn’t sure” about the inspection history of the pipes and that the state is also still trying to figure out the details with regard to the pipeline’s age and ownership.

– Sept. 15: Lawmakers, including Rep. Chris Lee, Ryan Yamane and Della Au Belatti, are scheduled to take a tour of the harbor in order to get a sense of the damage caused by the broken molasses pipe.

– September 16: The shipping company responsible for the spill will pay for all cleanup efforts. Matson Navigation Co. CEO Matt Cox said, “that he is sorry for the spill, and the company won’t ship molasses until it’s confident a similar spill will not occur.”