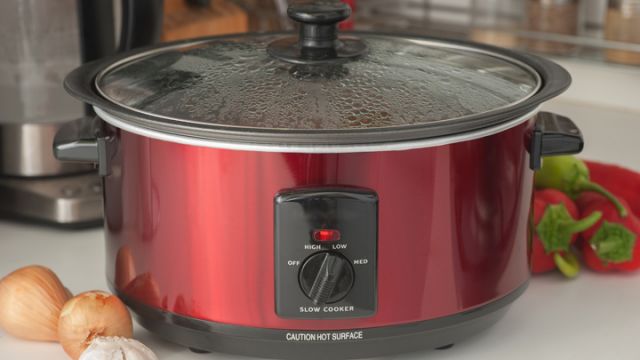 A throwback from the 70s, slow cookers are making a big comeback in the kitchen.

It’s easy to see why. They offer the same time-saving, fuss-free, one-pot style of cooking that made them popular in the first place.

As safe as slow cookers seem to be left unattended while they simmer dinner, some of them contain lead and other unsafe levels of heavy metals that could be slowly contaminating your food and making your family sick.

And if you found one at a yard sale or inherited an old one, be aware of safety risks such as old, worn cords when using them, because some very real health concerns are connected to old-fashioned slow cookers.

“If you were handed down a vintage pot from the 70s that has the insert firmly attached to the heating element, instead of a removable insert, then it’s time to upgrade,”

Slow cooker inserts made from glazed ceramic contain an alarming amount of lead – they also begin to leak this lead at a terrifying rate when heated.

According to the U.S. Department of Agriculture’s Food Safety and Inspection Service, most slow cookers reach a temperature between 170 degrees and 280 degrees Fahrenheit. But at 80 degrees, levels of lead being slowly leeched into food are 10 times higher than when the slow cooker is not heated. What also may be alarming is that the Food and Drug Administration doesn’t account for the lead levels leaching into food when the slow cookers are heated.

Health experts have found there are no safe lead levels for humans. Even in small amounts, ingesting lead can result in diminished mental performance and many health issues, Duke University researchers found.

A study released by the American Academy of Pediatrics found that children are particularly susceptible to poisoning from low levels of lead.

The World Health Organization (WHO) has identified lead as one of its ten chemicals of major public health concern. They also recognize one of the sources of exposure is through food – specifically from lead-glazed or lead-soldered containers.

Children are the most vulnerable because they absorb four to five times as much ingested lead as adults from a given source.

Exposure to lead in childhood is thought to contribute to 600,000 new cases of children with intellectual disabilities each year. Globally, lead exposure accounts for about 143,000 deaths each year.

The WHO fact sheet on lead poisoning and health states: “Young children are particularly vulnerable to the toxic effects of lead and can suffer profound and permanent adverse health effects, particularly affecting the development of the brain and nervous system.

“Lead also causes long-term harm in adults, including increased risk of high blood pressure and kidney damage. Exposure of pregnant women to high levels of lead can cause miscarriage, stillbirth, premature birth and low birth weight, as well as minor malformations,” it says.

Consider these three slow cookers that don’t seem to leach lead when heated: